The fantasy of Anwar Ibrahim?

It's the usual kaytee 'methinks'.

I appreciate Anwar Ibrahim must be downright disappointed by Pakatan Rakyat not winning majority rule in the recent general elections, more so when he had vowed to retire if his side didn't win majority rule. And it's a vow he has recently backtracked from, citing he still has mucho "unfinished work" to be done. 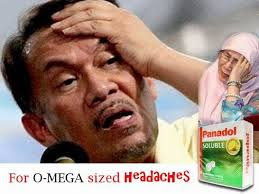 For nearly 15 years, this man has waited for his moment, to fulfil what he believes to be his destiny, to become PM of Malaysia.

But alas, time and time again, fate (and elections) failed him. Did he make the vow to retire in an optimistic belief that surely this time, fate couldn't be that cruel again and he would triumph?

He is obviously and totally dismayed and demoralized by the outcome of GE-13, and his defiant stand finds sympathies nationwide what with the public lack of trust in the EC's integrity and impartiality ...

... aggravated by the Commission's lack of professionalism, for example, in the so-called indelible ink affair, with the Chairman and his deputy not only making implausible excuses but constantly changing them - eg. from the initial 'staff didn't shake the bottle properly' to 'deliberate dilution of the ink's indelible properties to meet Islamic ablution requirements' (if so, then why bother with the indelible ink when by its dilution the EC has deliberately make it not indelible?) to the most idiotic of all, that 'the erase-ability of the so-called indelible ink didn't matter as the voters won't be able to vote the following day', etc - and that's only one of EC's numerous problems with its lack of professionalism.

Nonetheless, I do have concerns with Anwar's rolling series of Perhimpunan Blackout 505.

The first at Kelana Jaya was a success and I believe the message or point to be made on Pakatan's disagreement, dissatisfaction and disgust with the conduct of the polls has been made in a very powerful and inescapable notice.

But like all good things, overdo it and the powerful message will lose its impact. Along the way, earlier sympathies gained will gradually or even swiftly leached away, leaving behind growing irritation at the rallies.

PAS has indirectly shown its disenchantment with Anwar's style of protests in Harakah's Blackout 505: PAS serah kepada negeri where its top leadership has diplomatically left participation to the discretion of the party's state leaders, meaning PAS central leadership doesn't support it. It's obvious Pak Haji is distancing himself from Anwar's continuing protest rallies.

Kaytee personally believes that even in a hypothetical situation of Pakatan Rakyat winning majority rule with Anwar Ibrahim made the Prime Minister, Anwar Ibrahim will still be holding protest rallies.

But of or about what, you may ask?

About anything, because I reckon Anwar thrives on such activities. Maybe he will muster a protest rally against eco-Nazies for protesting against modern developments and neo-Luddites for industrializations  or ... well, almost anything?

Anwar has been involved with protest rallies since his university days (which are best forgotten) and in Baling for the farmers when he was in ABIM, which Wikipedia posted as:

In 1974, Anwar was arrested during student protests against rural poverty and hunger. This came as a report surfaced stating that a family died from starvation in a village in Baling, in the state of Kedah, despite the fact that it never happened.

... despite the fact that it never happened, wakakaka, but that's Anwar who thrives on protest rallies.

His most notorious one was being accused of hijacking Bersih 3, on which Dina Zaman wrote in The Malaysian Insider’s The Bersih that wasn’t as follows:

Methinks Anwar Ibrahim suffers from more than a wish to become PM through normal election (democratic) process, though of course there is definitely that. 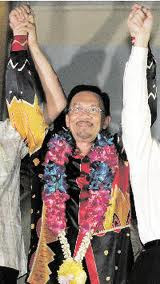 I hypothesized he entertains a fantasy, one where he leads a rousing cheering adoring crowd of hundreds of thousands who will storm Putrajaya with him, garlanded of course and lifted onto their adulating shoulders, to become the head of the nation.

Did I mention hero-fantasy and narcissism?

As he confesses to be an avid reader of Shakespeare I would even imagine him "refusing" thrice their appeals for him to be head, and only relenting finally (but of course, wakakaka) to accept the post.

You all did see that on the Lupercal

I thrice presented him a kingly crown,
Which he did thrice refuse: was this
ambition?


Whoa man, have just read FMT's BN will be toppled this year, which undoubtedly must be music to Anwars' ears, wakakaka, though I have to say I'm a wee shocked by Brother Haris' declaration.