The excitement leading to the 13th Malaysian elections should by now be over, but with the known results and its consequences of dissatisfaction among both UMNO and PKR leaders, we are now experiencing new excitement. But let's leave Mahathir and Anwar to their eternal vendetta and look at Selangor.

The PM has been sworn in, CM and MB of states have been sworn in as well BUT with one significant exception, that of Selangor.

Ironically this time, contrary to our worries, it's not PAS making an avaricious grab at the post in spite of the solar-powered bible salesman playing the batu api (agent provocateur). Both PAS and DAP have supported Khalid Ibrahim to be the MB as they believe he has done a damn good job in the previous term.

Opposition to Khalid becoming the MB of Selangor for the new state assembly term-ship comes from within PKR, that bloody nest of vipers. The best known secret for years has been Azmin Ali desiring the MB post for himself.

We have heard and read of his 'involvements' in PKR internal politics, the consequences of which have seen Zaid Ibrahim, Jonson Chong and a host of others leaving the party in utter disgust. We know Wan Azizah, Nurul Izzah and Khalid Ibrahim have been consigned, naturally or deliberately, to a camp different to Azmin's.

All these and more are known, yet tolerated if not approved by Anwar Ibrahim, who somehow seems totally beholden to Azmin's ambitions or captivated by the latter's charm ... ing personality.

Currently it's downright embarrassing for Pakatan as Malaysia's so-called premier state, won by the coalition with more than 2/3 majority, is now in an appalling state of leadership limbo, waiting for the announcement of who is to be the MB. PKR is the heels dragging culprit as it indulges in the shadow play within its ranks.

Raja Petra Kamarudin of Malaysia-Today wrote in his latest article titled The expected happened about the whys and wherefores of the delayed announcement of the Pakatan MB:

There is currently a tussle going on between Team Khalid and Team Azmin for the post of Menteri Besar. I have, in fact, written about this a few times in the past.

PAS and DAP have both issued statements endorsing Khalid Ibrahim. Azmin Ali, however, insists that he be made Menteri Besar and if Khalid is given the post instead then he will leave the party together with his supporters.

Anwar Ibrahim is now in a dilemma. First of all, his wife and daughter support Khalid and not Azmin. Secondly, most of the candidates in the recent election were handpicked by Azmin. Hence many of the 30 PKR Members of Parliament are his people.

Hence, also, if Azmin leaves with, say, just 15 of this supporters and they declare themselves as ‘independents’, then added to the 133 Members of Parliament that Barisan Nasional has, Barisan Nasional will now have a two-thirds majority in Parliament.

So, either Azmin is made Menteri Besar or else Barisan Nasional will get its two-thirds majority in Parliament.

It sounds like blackmail. And as we know, blackmail once appeased develops a dangerous voracious appetite that can never ever be satiated. There will be no stopping it.

I opine that Anwar should allow Azmin Ali to leave with 15 or even more of his inner coterie, and yes, let UMNO have that 2/3 which seems to have obsessed Dr Mahathir.

Other than possible further Constitutional amendments, perhaps to:

(a) deny Chinese the rights to vote, wakakaka, and let the mahjung games begin,

(b) increase the voting age to 35 and above, to prevent young Malays most of whom are pro Pakatan, from voting, and

(c) legislate to honour Dr Mahathir in a new position (in recognition of his extraordinary service which has been 'beyond the call of duty' to UMNO) as the Sultan of Sabah (an amended Constitution can do that), 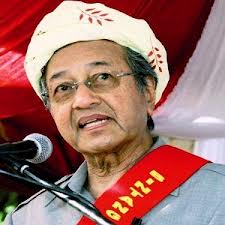 what difference would it make, considering UMNO is already leading the new Malaysian government.

If Azmin plus his 15 defect to UMNO, I guess-timate they will last at most 5 years before most of them will be swallowed up by UMNO, with their bones spat out by the time GE-14 arrives. I'll provide the toothpicks.

Of course my opinion won't count. But Pakatan in PAS, DAP and those PKR ADUN supporting Khalid have made their choice for MB, with only Anwar as Pakatan Leader left to persuade PAS and DAP otherwise.

This will be a wonderful test of Anwar's leadership qualities and his commitment to Malaysia and Pakatan as to whether he will let his personal ties to Azmin override what is obviously the greater good for both Selangor and the coalition.
Posted by KTemoc at 7:44 pm