Silence of the lap dogs

M Saravanan, VP of MIC, was particular LOUD in egging the UMNO-led government to punish the Chinese for not supporting BN in GE-13. This anti Chinese batu api acted in total contrast to his MIC colleague Dr Subramaniam who sought to quell UMNO's post-election anti Chinese diatribe.

There is no doubt that Saravanan acted ferociously and LOUDLY in his support for Utusan Malaysia, the UMNO media mouthpiece, in the latter's attack against the Chinese.

A reader of Free Malaysia Today, Cabin Ramadass, said: "Saravanan being a MIC leader has done great injustice to the Chinese community by joining the Chinese bashing bandwagon just to get popular with the racist Utusan and with the PM."

Personally I am not surprised by Saravanan's anti Chinese vitriolic because I have someone coming to my blog who claims to be an Indian and is fond too of abusing Chinese. It's just their way of ingratiating themselves with UMNO.

Be that as it was, Saravanan was certainly LOUD against the Chinese.

Edgar Lee Masters wrote a poem on Silence more than a century ago. The following is the last paragraph of his poem:

And there is the silence of the dead.
If we who are in life cannot speak
Of profound experiences,
Why do you marvel that the dead
Do not tell you of death?
Their silence shall be interpreted
As we approach them.

Yes, Saravanan who had been extremely LOUD against the Chinese is now startlingly silent on the murder of N Dharmendran.

Dharmendran was not an Indian gangster or unemployed vagrant, two groups of Indians whom police (and a former Home Minister) blamed for their criminality whenever they perished under mysterious or unexplained circumstances in police custody. FMT's Cops delaying murder probe informed us that:


Dharmendran, 32, an Indah Water employee was arrested on May 11 shortly after lodging a police report that he was involved in a fight earlier that night.

The father of a two-year-old daughter was held at the Kuala Lumpur police headquarters and was sent to HKL, where he died, on the night of May 21 due to an alleged asthma attack.

However, the post-mortem revealed that he had died of blunt force trauma. The family was also horrified to discover that his body was covered with bruises, while his ears and ankles were stapled.

Employed by Indah Water, he must have been surprised by the police arresting him after he had like a dutiful citizen made a police report for being involved in a fight. From the FMT report, it's obvious he was tortured before he perished, in all likelihood from the blunt force trauma. 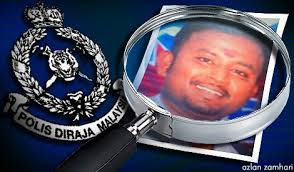 Imagine the horrors he underwent - his body was covered with bruises, while his ears and ankles were stapled. What beasts or barbarians have our once respected police become?

No wonder the most dangerous place in Malaysia is the police station. Please read my post Pagar makan padi - deaths in police custody.

Okay, but what about LOUD-mouth Saravanan? Why is he in this sad tragedy of a murdered Dharmendran quiet as a ... no, not lamb, but ... lapdog!

Methinks he dares not offend his MASTER.

Likewise with another UMNO lap dog Waythamoorthy who is no doubt trying to out-do Saravanan in a (lap) doggie competition to see who will please UMNO most by being most silent.

But Waythamoorthy is not only silent but has already sold away one of his so-called Hindraf central issues, that of Indian deaths in police custody. He willingly dropped this crucial Hindraf issue in his sweetheart deal with Sahib Najib.

Saravanan, Waythamoorthy - their SILENCE is all that more startling because they had very recently been most LOUD against the Chinese.

Related: The tragedy of Hindraf
Posted by KTemoc at 1:33 pm