His Majesty's Most Loyal Opposition

Plato was against Athenian democracy because he believed democracy's proponents were a bunch of, to use a synthesized Malaysian-Aussie word, syiok sendiri wankers, who were self centred anarchists, irrational and impulsive, and thus incapable of seeking out the common good for society. 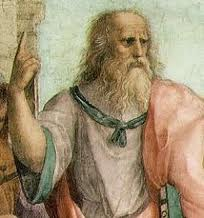 According to him, that situation worsened with an increasing population as it would render the individual's voice even more insignificant.

It was a prognosis that called for a 'papa knows best' remedy, wakakaka.

Until recent times, national strongmen (to borrow Josh Hong's term in his criticisms of Dr Mahathir Mohamad), especially though not exclusively those in Asia's SE Asian and Far East regions (with the possible exception of a US controlled and democracy-indoctrinated Japan) took on the role of 'papa' who knew best.

We are more familiar with the strongmen of our own SE Asian region, blokes and blokesses like Dr Mahathir, Lee Kuan Yew, Suharto, Sihanouk, and the oligarchy in the Philippines - am leaving out the communist and  military dictatorships in Vietnam, Laos, Myanmar and until recently Thailand (and f* Brunei, wakakaka).

Probably the Malaysian votes for 'Top Papa' would go down to the wire between (Tun) Dr Mahathir and (Knight of The Most Distinguished Order of Saint Michael and Saint George, wakakaka) Lee Kuan Yew or Sir Harry*.

* The British knighthood system is weird in that by convention the knighted person is addressed by his personal name rather than his surname, eg. Sir Cliff for Cliff Richard, Sir Sean for Sean Connery, thus Sir Harry (Lee Kuan Yew's western name) or if you like, Sir Kuan Yew.

I personally feel that the title of 'Top Papa' should go to Sir Harry (Lee Kuan Yew) because he was more "innovative" than our own Dr Mahathir, in his Singapore variant of Westminster democracy, as follows:

In 1984 Singapore had a constitutional amendment which allocated the opposition with a minimum of 3 seats in Parliamentary regardless of whether it won those seats or not. However,the member occupying those (awarded) seats were not allowed to vote in the new Parliament.

It was a fortunate constitutional amendment because after the results of the Singapore 1988 elections were announced, there was only one opposition MP, namely Chiam See Tong of the Democratic Party. The embarrassment for Sir Harry's (Lee Kuan Yew's) majority ruling PAP was that it won 80 out of 81 seats with just 61.8% of the votes.

Alamak, just one opposition MP to show for 40% of the Island State's votes?

Thank goodness, the 1984 constitutional amendment allowed Parliament to top up the opposition numbers to a more though superficially respectful 3, but in real terms, only one had voting rights in Parliament.

But those face saving (for Singapore’s democracy) seats didn't provide legal immunity for their occupants. Indeed after that election, Lee Siew Choh (Workers' Party) and Francis Seow respectively faced legal damages for comments (Lee) made about PAP during the 1984 election and trial for (Seow's) alleged tax evasion.

Anyway, my post is more about what Westminster democracy termed His/Her Majesty's "Most Loyal Opposition".

John Cam Hobhouse, 1st Baron Broughton, was credited with this term in 1826 when he attacked George Canning, the Foreign Secretary, in the House of Commons, stating: "It is said to be hard on His Majesty's Ministers to raise objections of this character but it is more hard on His Majesty's Opposition to compel them to take this course."

In mature Westminster democracies such as in Britain, Canada, Australia and New Zealand, the Opposition Leader of Her Majesty's "Most Loyal Opposition" is picked from the political party (after the ruling party) with the largest number of seats and who, traditionally, comes from the Lower House (Dewan Rakyat).

Our current federal Opposition Leader was originally an unelected person but who is now a MP though not from a political party (after the ruling party) with the largest number of seats in Dewan Rakyat, wakakaka. But I must admit his selection has been by consensus among the Pakatan allies.

The Opposition Leader in mature western democracies is treated as the PM-in-waiting and accordingly, provided with all the privileges/perks such as salary/allowance/staff and status, meeting foreign dignities (together with or separately from the PM) and being briefed on intelligence and national security issues. The Canadian Leader of the Opposition even has an official residence in the capital, known as Stornoway.

Any of that in Malaysia? And more worrying, I can't help but sometimes wonder whether their Highnesses consider the Pakatan Opposition as their Highness' "Most Loyal Opposition"?

Then, due to half a century of non-winning inertia, quite a few Pakatan people unfortunately consider themselves as the "opposition", without realizing that their sides are the majority ruling parties, as in the States of Kelantan, Kedah, Penang and Selangor (and once, Perak), where the BN becomes the respective State Opposition.

Sometimes, given Taib's "independence" from BN rule and policies, one wonders whether the BN is also the opposition in Sarawak, wakakaka, as was once perceived to be the case in Sabah when Tun Mustapha was CM, or as suspected by many, the wannabe Caliph of the Sabah-Mindanao Caliphate, wakakaka. 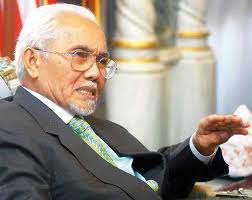 Save for those in mature Westminster democracies, the opposition usually has greater latitude in making campaign promises. Why not those in mature Westminster democracies? In Australia, for example, funding for opposition's promises would be independently and thoroughly costed or checked by the Treasury and publicised by the media, and woe betide the bullshitter or irresponsible promiser.

Such are the consequences that Opposition Leader Tony Abbot and his Shadow Treasurer (equivalent to our Finance Minister) have been criticized on a number of occasions for refusing to provide funding figures, a notable weakness in the Australian Liberal-National Party Coalition, and more importantly, indicative of those promises being far too "generous" (and thus unlikely to be kept, like John Howard's infamous 'core promises' where those he didn't keep were dismissed by him as non-core promises).

Back here in Malaysia, in the state of Selangor, the BN is the opposition, where we have Najib acting in the role of the BN shadow-MB of Selangor, most probably because he didn't yet want to name the MB-anointed until the 11th hour for fear of internal party sabo-ing, wakakaka. 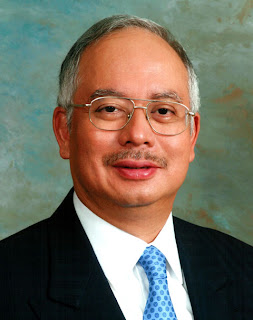 Yesterday at an MIC-organized Deepavali 'open house' celebrations at the Batu Caves temple, in that role, he promised to scrap the Batu Caves condo if BN regains majority rule in the state, stating:

"I guarantee that if BN successfully retakes Selangor, that 29-storey condominium project will be cancelled by the new BN government."

"Therefore, I make this (promise) and as you know - the BN government is a 'Janji Ditepati' government."

Leaving aside his extravagant election-campaign reminder of BN being a 'Janji Ditepati' government (non-core? wakakaka), he carefully didn't remind his Hindu hosts and generally Hindu audience that the condo had in the first place been approved by the former BN state government, so his statement about not wanting "new developments that threaten Batu Caves" sounded a wee hollow.

But what the heck, in election campaigning, a politician can promise anything, especially non-core promises, even including things he rejected before, wakakaka.

On that last bit, when Anwar Ibrahim was UMNO's Finance Minister, he rejected Sarawak's request for an increase in oil royalty from the standard 5%, yet now as Opposition Leader, promises 20%, yes, not 10 or 15% but a magnificent 4-fold to 20%, wakakaka. For more, see my 2008 post Sabah & Sarawak - Who dares promise wins?

It’s not that I don’t think Sarawak and Sabah deserve more – they do – but I question such a promise of 20%. It’s just like a much earlier PKR pre-election promise of lower fuel price – very easy to make when there’s little likelihood of bearing the responsibility of implementing the promise or of the necessity to remove unsustainable subsidies. Promises especially non-core ones, wakakaka, are cheap to make, so to say!

In May 2006, PKR in the person of Dr Wan Azizah, made the same promise. Then I had written in a post: 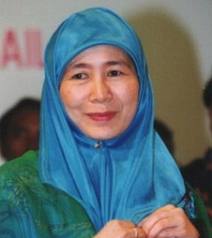 Well, in the recent campaign in the Sarawak elections, PKR president Dr Wan Azizah put herself and her husband, Anwar Ibrahim, in a highly vulnerable position when she raised the issue of petroleum royalty to be given to Sarawak ...

Wan Azizah said the people of Sarawak should not be paying more for petroleum products because the state produced the commodity. She claimed that since Sarawak was a large petroleum-producing state, it should be paid more than the five percent royalty it is now receiving.

Sarawak Deputy Chief Minister George Chan Hong Nam seized on her comments to ricochet that on to Anwar Ibrahim, who was former deputy premier and finance minister.

Chan said words to the effect that it was rich of Wan Azizah to grandstand on the issue when it was Anwar as finance minister who rejected a request for a bigger petroleum royalty for Sarawak.

Chan revealed: "When he (Anwar) was the finance minister, I myself asked for an increment in the petroleum royalty but he didn't give. Why is his party talking about it now?”

"I asked for more development for Sarawak because we don't have enough (development) and he also did not want to give (allocations). Why is PKR talking about it now? Why didn't he give us more when he was in power? Now he is no more in power, he can talk."

Well … didn't I just say promises are cheap ..... or more diplomatically, the opposition (whether Pakatan or BN) usually has greater latitude in making campaign promises?

Najib has just made a ‘go-starn’ (volte-face) promise to Selangor Hindus, as have Anwar and, in 2006 his wife Dr Wan Azizah, to Sarawakians. 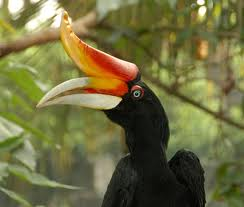 Today, we also see the BN Opposition in Penang and Kelantan making the same “generous” promises. I opine the one that takes the cake is the Penang Gerakan, when that party had increasingly failed Penangites for nearly 40 years.

If I recall correctly, once when asked about his idealistic young and rebelliously socialistic Singaporeans studying abroad, Lee Kuan Yew or now, Sir Kuan Yew, wakakaka, had said rather perceptively (sorry, only words to the effect, to the best of my memory) ‘… put those blokes in positions of power and responsibilities and they’d be the most capitalistic of citizens, defending their status quo’, and he was proven right.

Indeed, amen to that, because those students' nature, when in a position of no responsibility (prior to assuming one with lost of responsibilities) bear similarities to opposition parties making promises, but which, mind you, given our Malaysian boleh-ness, doesn't exclude the majority ruling party in government from indulging in, wakakaka, non-core election pledges.

Anyway, how I wish our Malaysian press and public institutions, with the exception of the Auditor-General Office, would be like the strongly-independent Australian press, and politically neutral Treasury and parliamentary clerk, in mercilessly crushing wild irresponsible promises or bull from any political party.