Malaysiakini published this article about a MIC warning to the Indian community: If you don't vote MIC, 'prepare to pay price'!

The report said: MIC, part of the BN coalition, took out full-page newspaper ads which said Indians' prospects would "disintegrate" if they deserted the government.

"If you don't vote for MIC, then be prepared to pay the price," it said in bold red letters, urging Indians not to cast a protest vote for PAS, which rules impoverished Kelantan. 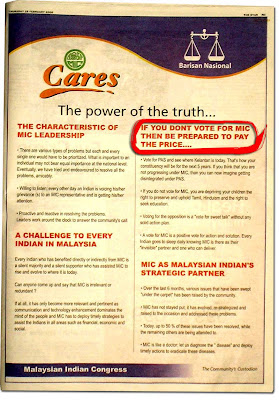 Apparently the message is supposed to win back the support of the Indian community, but the MIC has a funny way of wooing back people who have been and still are thoroughly disgusted with the do-nothing MIC leaders.

Regrettably MIC leaders tend to take their supporters for granted.

Mind you, a man I know has an unfortunate (bigoted) view of Indians. He said that they will still flock to Humpty Dumpty and the MIC despite being kicked and slapped around by those jokers.

I pray the Indians will show their H-powered resolve and dignity, and not let those MIC leaders intimidate them with a disgusting disrespectful disdainful threat.

Premesh Chandran of Malaysiakini wrote a piece on the 2008 Election in Umno may lose up to 10 seats.

I have just extracted the portion on how our Indian brethren can possibly affect the results, which read:

Umno may also lose seats with a heavy Indian voting base if the swing among Indian voters is larger than expected.

3 of these seats (in yellow highlights) are contested by PKR, with Lembah Pantai being naturally the high profile electoral constituency. If the Indian voters all turned against Minister Shahrizat, Anwar Ibrahim's daughter will be transported into Parliament on Hindraf power. Some may even comment on the irony of that.

But I wonder whether the walkout of PKR by Nallakarupan and several hundreds of former PKR Indian members would have an adverse effect on those PKR candidates’ chances. I heard Nalla has promised to campaign for the BN, which is the same as saying campaigning against PKR.

Well, if the fallout with Nalla has an unfavourable effect, then that’s something for Anwar Ibrahim to reflect upon after the election.

From the Star Online - Yen Yen: MCA way ahead on matchmaking in response to PAS manifesto for Kelantan which also promised matchmaking services for older women and the appointment of women as village heads.

Wanita MCA chief Dr Ng Yen Yen, herself a nya Ke-lare-tnare, said the BN had already done all the things promised by PAS in its manifesto.

She declared: “We’ve had women as village heads for a long time under the Barisan Nasional government. As for matchmaking, the MCA’s Cupid Club has been working on this since 2000. PAS’ proposals are nothing fantastic.”