According to the mass-selling Maariv daily, there is a ferocious Judaism-isation going on in the Israeli army. The military exerts pressure on new recruits who are not Jewish to convert.

I read that there has been a large influx of migrants into Israel but made up of non-Jewish Eastern Europeans or those who are only distantly related to Jews, with Russians in the majority.

Israel is keen to pat up its population with more non-Arabs, and if it can’t persuade Jews to migrate to that troubled spot, it is quite happy to receive non-Jewish Europeans.

In the 1990s there were one million immigrants from the former Soviet Union. Nearly one third are believed to be non-Jewish. The newspaper reported that most of the non-Jewish soldiers serving in the army are from this Russian influx.

These non-Jewish soldiers are sent to courses on Judaism after which they are ‘persuaded’ (pressured would be the better word) to convert. Israel’s chief rabbinate follows strict Orthodox conversion rules which means ..… you guess. 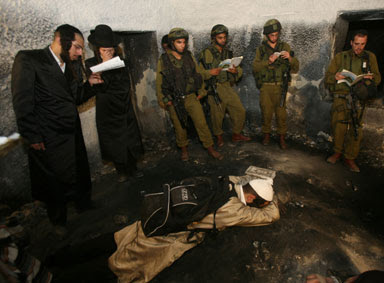 Today, unlike their predecessors, many soldiers in the Israeli Army unfortunately hold very extreme Jewish beliefs. Needless to say, religious fanaticism is at its peak in Israel, especially with a Kadima-Likud government.

If the Israeli Army still has any more vacancies, I would like to send a few Malaysians to them as potential dedicated soldiers of Eretz Israel. No, they aren't circumcised yet ;-)