From Malaysiakini: The Election Commission today announced that the nation’s 12th general election will be held on March 8, a Saturday coinciding with the school holidays.

And DAP pollie Jeff Ooi has been reported by the Star Online as likely to contest in Jelutong.

Now, I am not quite sure about the electoral boundary between Gelugor and Jelutong (of course I know where Gelugor and Jelutong are – sheesh!) but if my guess isn’t far off, I would have preferred Jeff to be contesting in Gelugor (won by Karpal Singh in 2004) as he is more likely to make an impact among the (at the risk of sounding snobbish) better educated (Westernised) voters.

Apart from his DAP label, by itself very powerful among the Penangites insofar as parliamentary seats go (but alas, not for State seats), Jeff Ooi will be depending upon his high profile blogger fame to gain voters’ support. For that, I believe Gelugor would be the better constituency, But I understand party sec-gen Lim Guan Eng is already earmarked for that seat.

Anyway, for Jeff, Jelutong will still be a better seat than Bukit Bendera. Though Bukit Bendera is winnable, the Gerakan is strongly entrenched there, and to win that seat, the DAP will require a 'Lee Lam Thye' type rather than a blogging ace. DAP party strategist Liew Chin Tong is rumoured to contest in BB - alas, I don't know much about him.

I heard Raja Bodek is standing there, exchanging his Tanjung Bungah (State) seat for Chia Kwang Chye's seat. I hope Raja loses real big, but I suppose that's more wishful thinking than realistic, as the hawkers and traders in the BB parliamentary constituency will be quite pro Gerakan. KNN!
But what I found rather intriquing has been the Star photo showing former State Exco Khor Gark Kim chatting with the current crop of DAP pollies for Penang.
I wonder what's going on? 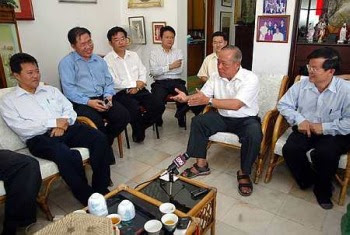 You see, my uncle told me that Khor at one time was a Gerakan strongman, next in the line of power only to Dr Lim Chong Eu. Khor was a Bukit Bendera local boy made good. A UM graduate who was known as a hard working (Chinese educated) Science teacher, he rose up in the Gerakan in meteorite fashion.

Everyone expected him to succeed Dr Lim, but he was the CM that Penang was not fated to have. Due to internal party politics, he was ousted from Gerakan's upper echelon. There was bad blood between Khor and some current Gerakan pollies. I wonder whether he's advising the DAP on strategy, as a form of extracting some long overdue retribution.