My blogging mate Susan Loone alerted me to the petition to DAP sec-gen Lim Guan Eng, ‘appealing’ to “Saudara Guan Eng and the leadership of DAP (not PKR, mind you but DAP) to ensure the candidacy of Fong Po Kuan in Batu Gajah parliamentary seat, and to give way to Parti Keadilan Rakyat to allow Christina Liew, Elizabeth Wong and Gan Pei Nei to contest for the parliamentary seat of Kota Kinabalu, and state seats of Batu Lanjan and Rawang."

It then goes on to say “Appreciating DAP’s commitment to fielding 30% of women candidates in the elections, we appeal to your wisdom and love for Malaysia’s democracy to ensure the candidacy of Po Kuan, Christina, Elizabeth and Pei Nei.”

I am always in support of more ladies in Parliament, but helloooooo, why address an issue of 3 PKR members to the DAP? What has the DAP party’s commitment to fielding 30% of women candidates in the elections got to do with the members of another political party?

I am annoyed that the letter of petition supporting the 3 PKR lady candidates has been sinisterly addressed to DAP sec-gen, LGE. Yes, what the hell has a DAP leader got to do with 3 PKR candidates of whatever gender.

PKR candidates are the responsibility of the (de facto) leader of PKR. Why hasn't Anwar put a fine person like Eli Wong in Lembah Pantai instead of his own daughter?

Using Fong Po Kuan’s name in the petition has been a deceitful show of care (croc tears) as the real aim is to insinuate that LGE will be responsible for not looking after the 3 lady candidates (from PKR). Damn PKR is playing dirty again, bloody blackmarking LGE.

It reminds me of a true story. I have an irresponsible cousin who is married with 2 young children but jobless (could never hold on to a job). We cousins gave him money to look after his family but he squandered all on drinking and gambling, not once but each & every time we provided him with cash. We ended up looking after the welfare of his wife and kids as well. OK, we are family so we look after them!

It’s like De Facto Daddy Anwar Ibrahim, after negotiating with the DAP on seat allocation and allocating those he has secured to his favourites, leave his (Chinese women) children to go ask Uncle Lim for sustenance. Just like my useless cousin!

It's Anwar's responsibility to look after the 3 PKR ladies, not Lim Guan Eng's. Why not petition Anwar Ibrahim with a letter asking him to nominate Eli Wong, and not his daughter, for the parliamentary seat of Lembah Pantai. Afterall, Eli Wong is one of the most staunch members of PKR, certainly more senior than Anwar's own daughter.

Susan Loone and I were discussing my yesterday's post on Fong Po Kuan. The only people rejoicing are the BN, particularly the MCA. For the MCA, the Fong’s news is like a durian tree miraculously sprouting up overnight next to its HQ's doorstep and bearing rich succulent fruits for their eating. No wonder the Star Online journalists are banging away like mad on their keyboards to milk the sad affair for all its worth 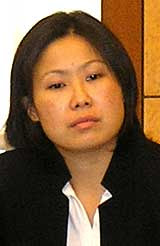 I lamented to Susan that the timing for such a shocking news was just terrible for the DAP, and hope that there would be some damage control. Susan was quite succinct in stating that the opposition (DAP) has always been poor at spin and sandiwara. Too true, the DAP leadership has been too truthful, straightforward and in some ways, naïve. A couple of them can be used to calibrate rulers.

Today Malaysiakini reported that Lim Guan Eng voiced his worries that the DAP may lose Batu Gajah. I hope Fong should consider returning for the sake of the DAP, and not be bothered by local State leaders jostling for a piece of the blue ribbon seat.

I believe Lim Kit Siang when he said the party’s leadership was right behind Fong for Batu Gajah and support his appeal to Po Kuan - Malaysia needs you to create history to deny BN 2/3 parliamentary majority.

The Star Online reported about Penang’s Close race for CM job. It stated:

Top-level sources said the Chief Minister is unlikely to be named before nomination on Feb 24. And unless necessary, the person may be named only after the elections. “We want to keep our options open,” said the source. Or as one Penang state exco member put it: “Get past the ballot box then only talk about getting the medal.”

Others think that Dr Koh should quickly name the man and put an end to the jockeying so that party members can focus on the elections. But Dr Koh has been dragging his feet every step of the way on this matter. He only confirmed moving to a Federal seat last week and, until now, is said to be undecided whether to contest in Batu Kawan or Bukit Bendera.

Some say he needs another nudge from the Prime Minister. In the meantime, Dr Teng and Chia should just try to enjoy the limelight.

Raja Bodek is typically hesitant for the reasons he’s waiting for his Daddy from Putrajaya to tell him who should be the next CM, because the Gerakan Party has no say at all. Then, he's also hesitant about his own choice of federal seat, because he’s so sh*t scared that the Gerakan Party may suffer what it did to the MCA in 1969.
Posted by KTemoc at 6:28 pm