No light at end of UMNO 'Tunnel'

In the wake of UMNO Puteri’s Noraini Ahmad attack on a Chinese Malaysian blogger, Namewee – see Malay 'sacrifice', Chinese 'sacrifice' - Wanita Umno Kubang Kerian chief Zaleha Hussin must have felt she too needed to make some kind of impact.

Well, it’s a competitive world in UMNO as the party’s pyramidal structure gets narrower and narrower as one strives to the top.

Yes, we must understand that she could be worried with young upstart members like Noraini Ahmad. So Zaleha probably wanted to say something profound.

OK, there’s plenty of important pressing material for discussions at such forum, what with the nation still reeling from corruption, crimes and cronyism (all three ‘c’ could well be inter-related), and prices inflating like chapattis heated on pans, and young little girls murdered before they reached 10, Zaleha decided …….. get this …….. to attack the uniform of AirAsia air stewardesses.

Malaysiakini reported that at the UMNO annual assembly Wanita delegate sees red over AirAsia uniform. The women delegates to the annual general assembly of mighty political juggernaut UMNO discussed in depth, and with strong words, the AirAsia uniform for female cabin crew as ‘embarrassing’ to women. 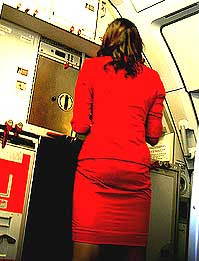 So she diligently skipped silly issues like corruption, cronyism, crimes, rising prices of goods, little girls being murdered under cruel circumstances, to focus on what she considered as the provocative dresses of stewardess on AirAsia.

None other than tebuan keeper, Badruddin Amiruldin. The exchange between these two midgets went as follows:

And the UMNO crowd roared with laughter and approval at that salacious remark by the Chairperson of an UMNO forum on social issues and religion.

Hmmm, wasn’t this the same Badruddin Amiruldin who insulted God?