K Sugu is another of my fave columnists at Malaysiakini, who should be persuaded to write more often. Today he posted a great piece on Indians and Hindraf, but I want to give you just an extract of what Malaysiakini has published.

The extract refers to the conquest of Mt Everest by M Magendran and N Mohandas, the first Malaysians to reach the top of Chomolungma (Goddess Mother of the World) as Everest is known in Tibetan. 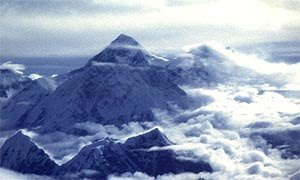 An excellent example of this attitude was when two Indians in the first Malaysian team to attempt the conquest of Mt Everest managed to reach the peak first.

The question in Parliament was: “Why didn't they wait for the others?” which beggared belief and exposed that particular YB's abysmal ignorance of conditions prevailing in the Himalayas. His question implied they should have waited for their betters.

The poor benighted man was reacting from a deeply entrenched habit, a product of his environment that continues to this day.

I wasn’t aware of this story, but it's an unspeakable unbelievable unforgiveable words testifying to ethnocentric arrogance and parochial narrow-mindedness!

And who was that Yang Berbodoh?

By contrast, this was what Magendran said: "For all Malaysians it shows racial unity, teamwork, that we could do anything if we work as a team and believe in what we are doing. People are very proud."

Well, you can hardly blame the poor Indian Malaysians for feeling right royally pissed for being considered as the Malaysian Harijans by people like that YB idiot.

200 years of residence in this great country (don't blame country, it's the system) with 50 years of Malaysian citizenship, and the Yang Berbodoh wanted the two Malaysian Sherpas to wait until the UMNO anointed Sahib could catch up and step up to the peak to plant the Jalur Gemilang.