Ruler the Head of Islam

FMT - When a ruler has to step in to defend moderation (extracts): 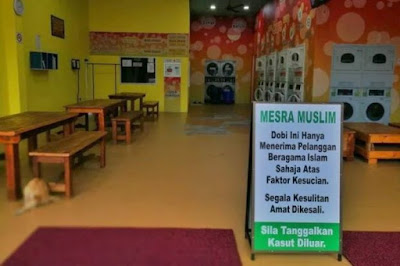 The Sultan of Johor, in his capacity as supreme leader of the Islamic faith in Johor, has done and said things our politicians have failed to do. [...]

Strangely however, prior to the state ruler’s rebuke against the laundrette owner, Johor Menteri Besar Mohamed Khaled Nordin said the state government would not interfere nor support or oppose such operations, adding that it was the business owner’s discretion to do so.

The state government’s ambiguous stand could be dangerously interpreted as an endorsement of such actions.

The article is from Sin Chew Daily. And it is right in criticising the Johor state government for refusing to interfere or support or oppose such Muslim-ONLY business advertisements.

Reality is our politicians currently, and indeed on both sides of the political fence, are nervously keeping clear of any controversial Islamic issues as GE-14 nears, unless of course the individual's own constituency is not dependent on Malay-Muslim votes and Party Headquarters has given a quiet-then-act-dunno 'nod and nudge' to 'test the waters'.

And that's why PAS, sensing blood, has been emboldened to act more aggressively and intrusively into non-Muslim affairs for two reasons, (i) a DNA-ed lust for encroaching into non-Muslim domains and (ii) for sex-ing up issues which may or will embarrass the federal Opposition, dumb-ing to silence parties such as Pribumi, PKR, and especially Amanah, for Tai-Koh?

Even the Pakatan state governments in Penang and Selangor have been taking tango lessons, wakakaka.

But at the end of the day, in the final analysis, many have forgotten that the Islamic religion in states is the sole right and prerogative of each HRH or HM, and in Penang and the FT, HM the Agong. These rulers are respectively the Head of Islam in their own states, and the Agong in the FT's.

On such issues, we are grateful that HM Sultan of Johor and HRH Raja of Perlis have laid down the rules.

MBs and CMs can of course mumble here and there, perhaps with silent threats, but in the end it's the rulers who can effectively decide.