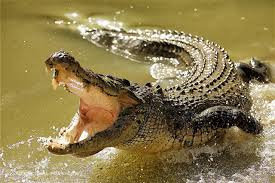 [Mahathir] launched into what has become his standard performing act – he painted Najib as public enemy No.1, accused his government of kleptocracy, poked fun at his wife, explained why DAP is no longer his enemy and declared that Pakatan could form the next government.

And since he was on Sarawak soil, he made soothing sounds about restoring the state rights of Sarawakians. [...]

And as expected, he blamed his predecessor and successor for Sarawakians’ grievances over territorial sea rights and petroleum royalty. He was, of course, not to be blamed.

“Mahathir is saying what the Chinese want to hear because in the urban area, they are angry with the Government,” said a retired Chinese professional. [...]

DAP leader Lim Kit Siang was quite carried away by the whole thing and asked Sarawak and Sabah to deliver 40 of its 56 parliamentary seats to Pakatan.

But Dr Mahathir could not bring the tsunami mood to Sarawak. He looked old and sounded tired against the giant stage backdrop that was plastered with the “New Deal, New Hope” slogan.

The charisma is still there, but the days when he could walk on water are long over.

He carries too much baggage with Sarawakians and as Deputy Chief Minister Tan Sri Dr James Masing said: “I do not think he is sincere. In his 22 years as prime minister, he never bothered to touch on it (renegotiating the Malaysia Agreement), he refused to talk to us about it.”

One of the reasons why the state government did not bar Dr Mahathir was because they wanted to assess his impact and they now have the answer.

The saying that it is better late than never did not work in this case and the opinion out there is: Why now? Why didn’t Dr Mahathir do it when he had the power to do so?

Michael Tiang, the political secretary to the Chief Minister, let go a stinging open letter which basically told Dr Mahathir that he is not qualified to talk about what Sarawakians want and that since he retired as prime minister, Sarawak has been able to set up is own development bank, Debos, and its own petroleum company, Petros.

Besides that, Tiang expressed disappointment that despite being a statesman, Dr Mahathir’s attacks on the Prime Minister’s wife were no better than what cybertroopers do on the Internet.

“Your political partners like Lim Kit Siang do not deserve any welcome in Sarawak. He has criticised Sarawak for abusing our immigration powers. What do you mean abusing our autonomy? This is our autonomy since 1963!

“If Lim Kit Siang cannot accept the fact that we had this autonomy since 1963, Sarawakians should not believe there will be any ‘New Deal and New Hope’ for Sarawak,” said Tiang.

Sarawak has always had this peculiar thing about rejecting political parties from the peninsula, especially Umno, whom they view with great suspicion. [...]

They do not like peninsular figures telling them how to run their state. They want to keep race and religion out of the Sarawak way of life.

They view Dr Mahathir as a primary cause of what the country is today and that is why many of them draw a line about his leading role in politics today.

Even at 92, an age which should persuade any old man to enjoy his retirement and play with his grandchildren and great-grandchildren, Mahathir still has to give it his best shot, IF he wants his dynasty to succeed.

In a certain way it's sad his political heir and youngest son, Mukhriz, is not quite up to that task himself, failing even to secure at least a VP position, a vital step for any P-ministerial aspirant.

Thus the 92-year old father with a heart condition continues to carry the 'burden' of that aspiration.

Ironically, today his best bet is his disliked, despised and disregarded Chinese as they were in 1999 when they saved his ungrateful arse after his Malay constituency deserted him following the Anwar debacle.

He now banks on the Cinapeks' support with the help of his arch-foe-now-turned-best matey, Lim Kit Siang. Both hope for 40 out of 56 federal seats in Sarawak and Sabah in GE-14 to have a fighting chance to sit in Putrajaya.

But of course, as in anything and everything in Sarawak, Peh-Mor sits quietly and cosily behind the scene, watching, listening and evaluating who would benefit him most. So long as he lives and reigns in the state, his last word will be the deciding factor.

Thus Taib Mahmud is the crucial, critical and c**t-ish element in any elections in Sarawak.