From the Star Online (brief extract only): 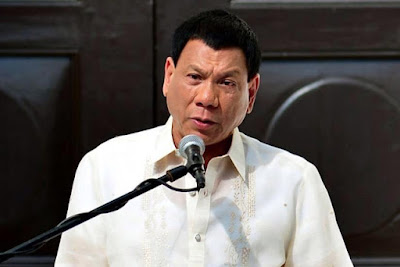 Philippine President Rodrigo Duterte announced his "separation" from the United States on Thursday, declaring that it had "lost" and he had realigned with China as the two agreed to resolve their South China Sea dispute through talks.

Once a colony of the USA and oppressed by that same so-called Leader of the Free World, the Philippines has been used kau kau for eons by the Yanks, as the latter had used others (eg. Thailand, Taiwan, S. Vietnam, etc) kau kau for its own interests.

Thus I am not surprised that Duterte has jumped ship when the USA has not helped the Pinoys since the Yanks were kicked out of Clark Air Base and Subic Bay Naval Station.

The Yanks had left behind only chaos and disruptions in Filipino social lives, VD, Aids and an arrogant two-fingers to local justice system as it protected its soldiers, sailors and airmen from being changed for rapes, murders, manslaughters, assaults and other crimes.

It did and still does these in every country it has stations and bases in, like Japan, South Korea, Italy, and even Australia, etc.


Furthermore, Duterte might have sensed the Americans were batu-api-ing the regional countries, making use of others again, into surrounding China in the usual blockading strategy that it once employed against the USSR with countries surrounding the Russians from Norway through Western Europe all the way to Turkey as NATO.

Much earlier the USA had client states such as a Shah-ruled Iran and an earlier friendly-to-USA Pakistan. They were equally roped in as members of CENTO to oppose the USSR.

Today, the USA has recruited an once non-aligned India who salivates at American promise of new nuclear technology, aircraft carrier tactics and technology and warplanes. It has also coopted one-time archfoe Vietnam into its camp to surround China.

The South China Sea dispute was a heaven-sent-come opportunity for the USA to encourage the regional nations into opposing China for her island-making ventures. Even India, now an US client, has pompously voiced her intentions to send her naval fleet to the South China Sea (never an area of Indian interests) to conduct patrols and war games with Japan, Australia and the local naval powers. 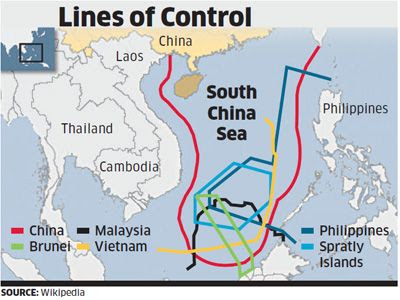 The USA has this favourite strategy of surrounding countries it doesn't like (eg. USSR, China, Iraq, Iran, etc). Maybe it's in their wild west frontier DNA. So we have or had seen the formations of NATO, CENTO, SEATO, ANZUS and Japan-USA and South Korea-USA treaties, etc, wakakaka.

I forecast that Duterte, with his ship jumping from the USA to China, won't last long if the CIA is allowed to do what it traditionally does, wakakaka.

The Yanks also has this habit of arranging the deposing of national leaders it considered and considers as not friendly to the USA, at times even assassinating them directly or indirectly, people like Salvador Allende of Chile, Muammar Gaddafi of Libya, Saddam Hussein of Iraq (its once best matey in the Middle-East), Soekarno of Indonesia and some African and South American national leaders.

On the flip side, it nurtured or even protected draconian dictators such as Saddam Hussein (when it suited the USA), the Saudi King and family, Anastasio Somoza Garcia of Nicaragua, some of Pakistan, Thai, South American, South Vietnam leaders, Suharto of Indonesia and Chang Kai Shek of Taiwan, etc.


Rodrigo Duterte may/will be next to join the list of leaders the CIA had arranged for their ousting or assassinations. Adios Rodrigo amigo, wakakaka.