The burger that confuses Muslims?

Recently Jakim made an international fool out of itself by its demand that Auntie Annie changed the name of an item on its menu, namely, pretzel dog (a beef hot dog) to pretzel sausage before a halal certificate would be issued to the fast food chain.

The word dog is in Jakim's eyes not acceptable because it might confuse Malays who again in Jakim's eyes are an easily confused lot, even though hot dogs have been sold by Malay stalls for eons as hot dogs.

For its ignoramus stupidity, Jakim was torn to shreds by UMNO Minister Aziz Nazri and to a lesser extent by even a PAS person, Nik Abduh, son of the illustrious Allahyarham Pak Haji Nik Aziz.

But while his late dad was a much loved and respected man, Nik Abduh himself had been the bullshitting exploitative fabricator that Allah swt sent a flood to devastate Kelantan, the home of many pious Muslims, because the DAP (elsewhere in other states) did not and does not support PAS in its syariah (hudud) law demands.

Hadn't that been immorally sinful of Nik Abduh to misuse the name of Allah swt and in a silly way as if the Almighty has been incorrectly willful in its devastation of a pious Islamic state in Malaysia?

I wonder whether the shameful example of Nik Abduh disproves for once the old English saying of 'The acorn doesn't fall far from the oak tree'.

Be that as his bullshit had been disrespectful to Allah swt, that Nik Abduh had even criticized Jakim for going overboard in an attempt to control lives and livelihood among the Muslim community in Malaysia is an indication that indeed Jakim dived into the shark-infested Marina Trench, in which we should have left that Islamic organization, wakakaka. 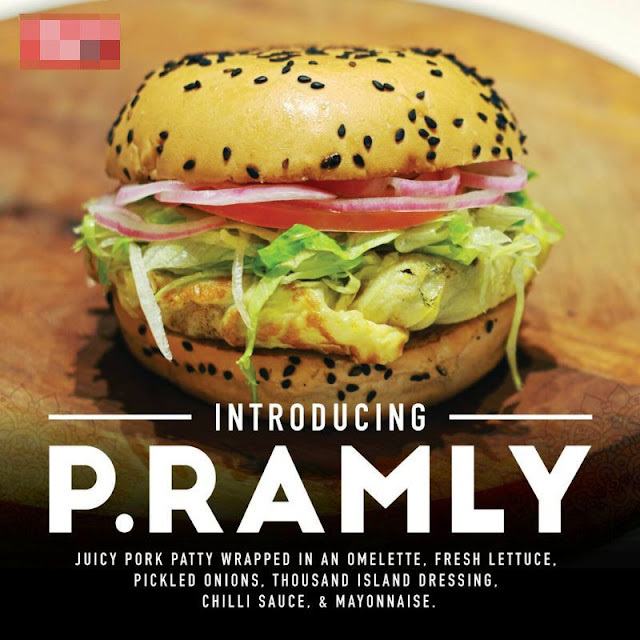 Now P. Ramly in any spelling (Ramli, Ramlee, etc) is recognized as a Malay name, and Malays in Malaysia are Muslims, or else, or else they by the Constitution and legislature would become nonentities (no race thus no identity and no 'presence' or does not exist in Malaysia), and by socio-religio-cultural practice become at best an apostate and to be officially rehabilitated or at worst, be beaten up kau kau until he returns to the fold, and where under a PAS federal government with its full syariah law implementation, such persons may even face worse.

Anyway, whether the P in P. Ramly burger stands for pork, or that pork has been mentioned in the poster, or that I in my working life in Malaysia personally know of some Ramlee's who actually partook of pork and also yamseng-ed, I am left in no doubt that the burger name of P. Ramly, filled with juicy pork patty, has been very very disrespectful and naughty of the burger owner and/or creator of the name.

Then to say the P. Ramly burger has been named in honour of the actual P Ramly is not only disrespectful but bloody insulting, no matter how innocent, naive, innovative, cheeky or kuai-laan the creator of P Ramly pork burgers has been.

Has it been a sinister intention to sell that burger to Muslims? Personally I don't think so, as in the same way I know that bah-kut-teh and char siew pau sellers don't need nor want to have Muslim customers.

WTF then had been the purpose of that name?

Kuai-laan? NO, only Penangites have the persona to carry that off, wakakaka.

I have a sneaky suspicion that the claim the name of the burger had been in honour of the real P Ramly might be true, BUT and a very big BUT, that dubious 'in honour of' has been in extremely poor taste.

That burger name must be removed, full stop. And there is no further need to punish the owner. Besides he has had enough free publicity, and like nasi lemak anak darah and Vanggey nasi kandar, his juicy pork patty burger will sell well among non-Muslims.

However, I'm annoyed on a small point (just kaytee's beef) with the few Muslims who unbelievably claimed they had been confused with the P. Ramly burger's status. Have they been so stupid as to be confused by the word 'juicy pork patty'?

The stupid word 'confused' has come to its low point to join others such as 'don't test my patience', 'keep calm', 'helm', 'certain quarters' and 'misunderstanding', etc.