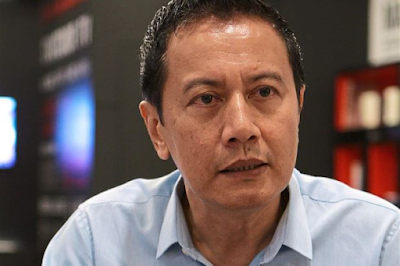 Lawyer-activist Azhar Harun, better known to us as Art Harun, has been blooming annoyed with some religious instructions, one of which pertained to actual slaughter of animals (70 live quails) at a school in Batu Caves. I won't delve into its slaughtering details - you can read the FMT article yourself.

But what took the cream off the cake was, as Art informed us, a different religious lesson which his son encountered in the latter's private school.

That lesson was conducted by an overzealous religious teacher who showed the schoolchildren what Hell was like.

Hmmm, I wonder whether that teacher used the Malay word 'Neraka' or the Arabic word "Jahannam'. I guess with those ulamas' cringeful proclivity for all things Arab, it might have been the latter - aiyoyo, poor underused 'Neraka'.

Art told us that that religious teacher used a YouTube video to demonstrate to the schoolchildren what hell looked like.

But this had been the joke (for us non-parents - sorry Art). Art said:

“It was not even a video of a Muslim hell. It was made by a Thai Buddhist and the version of hell in the video was so gory, my son could not sleep for days.”

Art said it would have been better for religious teachers to show the meaning of religious teachings rather than practised slaughtering real live animals or using a YouTube video on a Thai's version of Hell*.


* actually in Buddhism there is no Hell or Heaven, just continuous re-births (where in each life one may have the misfortune to meet blokes like Donald Trump, Perak Mufti, Hitler, Benjamin Netanyahu, etc) until one can reach enlightenment (Nirvana)

But Art, without showing frightening scenes of Hell kau kau, the Muslim children won't be intimidated into obeying the instructions of ulamas.