If syariah punishment is so benign why increase the flogging? 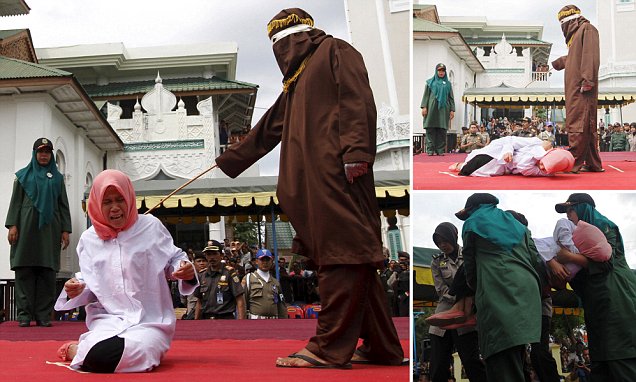 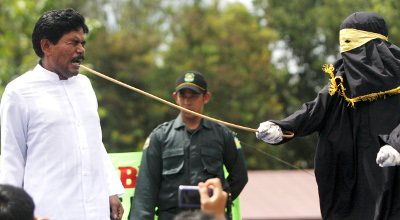 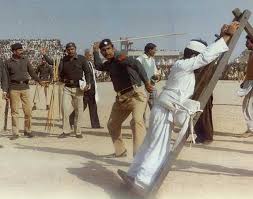 KUALA LUMPUR, Oct 15 — Whipping punishment meted out under the Shariah law is less painful and does not hurt the skin as it uses only a small cane, PAS Central Committee member Dr Mohd Khairuddin Aman Razali said today.

“Act 355 fixes a maximum penalty of three years imprisonment or RM5,000 fine or six strokes of the cane,” he said referring to the Shariah Courts (Criminal Jurisdiction) Act 1965, also known as Act 355.

“While the punishment for the three crimes under Islam is caning, the cane is a small one which does not hurt the skin, what more the flesh,” he said in a statement, referring to alcohol consumption, accusing Muslims of adultery without proof and adultery.

“In fact, the caning practised by the Civil Courts is painful and hurts the skin which is in contradiction with Islam,” the Kuala Nerus MP said.

If that is so, then why then increase the floggings?

Currently, the Shariah Courts (Criminal Jurisdiction) Act 1965, also known as Act 355 is limited to a maximum penalty of three years imprisonment or RM5,000 fine or six strokes of the cane, but Pak Haji Hadi Awang wants to INCREASE these.

As I have just written above, if the syariah law is so benign as to use only a small cane thus punishments would be less painful and does not hurt the skin, then explain why the flogging must be increased?

Why not leave as it is, to demonstrate the benign nature of syariah punishments? Unless of course the proposer wants to punish kau kau, to frighten Muslims.

I do NOT believe Pak Haji at all because his Bill is silent on a number of issues, except that there will be no death penalty. The last is also very 'sus' and dodgy.

Because of the ambiguity and absence of details of Pak Haji's Bill, then what about amputation of limbs?

In June this year Professor Dr Abdullahi A. An-Naim from Emory University, an Islamic scholar, was reported to have said Pak Haji Bill to amend the current limitations on punishment awarded by Malaysia's Syariah Courts was intended to empower the Islamic courts to pass any punishment permitted by Islamic law, which actually translate into hudud.

The professor said, words to thr effect, Pak Haji’s Bill was a sneaky way to  bring in hudud punishments, much as Pak Haji may protest to that.

The professor said at a press conference, "They [PAS?] just don’t want to say it. That’s why I think, with all due respect, it’s rather unprofessional to say the least, if not, devious, to sneak something like this into the legal system without people being aware of the full implications."

“When you pass this … then any state can define crimes and punishments which will fit this expanded jurisdiction of the Shariah courts. Whether or not you want to introduce hudud in Malaysia should be a matter that is openly debated, not just simply achieved by so-called parliamentary tactics. This is too fundamental and dangerous to be snuck into the legal system this way.”

Prof An-Naim also said he found it strange for PAS to “pretend” to be implementing hudud but excluded the death penalty, a punishment under the Islamic penal code.

He remarked that PAS (or Pak Haji) has, in this naughty exercise, redefine hudud from the way that code of punishment exists in Islamic jurisprudence for PAS' (or Pak Haji's) own political expediency.

In other words, Pak Haji has been outrageously tinkering with Islamic jurisdiction as the Islamic laws had been written, just for PAS or his political expediency.

By the by, the Kelantan Syariah Criminal Code II (1993) Bill 2015 prescribes hudud punishments for offences like adultery, theft, robbery, sodomy, consumption of liquor and apostasy, but is currently not allowed because of the current limits in the Shariah Courts (Criminal Jurisdiction) Act.

If Pak Haji gets his way, the Kelantan Syariah Criminal Code II (1993) Bill 2015 will come into effect with its hudud punishments seeing punishments like amputation of hands for theft and death by stoning for adultery and apostasy.

In 2005 Prof. Dr. Shad Saleem Faruqi, who was (is?) Professor of Law and Legal Adviser to Universiti Teknologi MARA wrote an article titled 'The Enforcement of Morality' for the Malaysian Bar, as follows (extracts only, please read the full text in provided link):

Is it the business of the law to suppress vice and to enforce morality? Discussion of these issues is premised on the belief of the “legal positivists” that law and morality are two distinct spheres which can (and should) be kept apart. In fact, the distinction between legal and moral duties is not always possible.

It is also noteworthy that the debate on whether the law should enforce morality tends to concentrate on matters of sexual morality. It is time to broaden our moral horizons and to recognise that there is more to morality than sex. Socio-legal issues such as corruption and crime are also the stuff of morality.

Once morality is understood in a broader context, it becomes obvious that the enforcement of morality is one of the primary functions of the law.

Islam’s requirement to prohibit all that is munkar and to promote all that is ma’aruf has to be borne in mind. At the same time Islam’s respect for privacy must be honoured. Harming fellow Muslims, trying to uncover their nakedness, committing espionage or reporting on the private affairs of others is forbidden in Islam. According to a Hadith, exposing the faults of others through suspicion and espionage, spying upon one another, trying to bare each others hidden failings and exposing or exploring the privacy and personal weaknesses of the people is regarded as reprehensible. According to another Hadith “if anyone tries to uncover the nakedness of his Muslim brother, God will uncover his own nakedness.

Haven't the above been precisely what the religious departments of the various states and federation of Malaysia been doing, spying on their own Muslim community to reporting on their private affairs and/or to explore the privacy and personal weaknesses of the people? In fact I dare say these seem to be those religious organizations' principal role.

While we have the Professor, let's also peruse his take on Islam in Malaysia, whether the nation is secular or Islamic. as follows (again extracts only for consideration of  length):

ISLAM AS THE RELIGION OF THE FEDERATION

Historical evidence: Malaysia’s document of destiny does not contain a preamble. The word ‘Islamic’ or ‘secular’ does not appear anywhere in the Constitution. However, there is historical evidence in the Reid Commission papers that the country was meant to be secular.

This view of a secular history is strongly challenged by those who argue that before the coming of the British, Islamic law was the law of the land. With all due respect, such a picture oversimplifies an immensely complex situation. A look at the legal system prior to Merdeka indicates the presence of a myriad of competing and conflicting streams of legal pluralism.

The Neolithic people who lived in the alluvial flood plains of Malaya between 2500 BC and 1500 BC possessed their own animistic traditions. Likewise the Mesolithic culture (encompassing the Senois of Central Malaya, the Bataks of Sumatra and the Dayaks of Borneo), the Proto-Malays and the Deutero-Malays had their own tribal customs.

Hinduism from India and Buddhism from India and China held sway in South East Asia between the first to the thirteenth centuries and left an indelible imprint on Malay political and social institutions, court hierarchy, prerogatives and ceremonials, marriage customary rites and Malay criminal law. The incorporation of the patriarchal and monarchical aspects of law are said to have been influenced by Hindu culture. Some of these influences linger till today.

In Peninsular Malaysia Chinese traders brought with them their own way of life and the close relationship between Malacca and China during the days of the Malacca Sultanate opened the door to Chinese influence on Malay life.

Before 1963 Sabah and Sarawak were guided by their native customs and by British laws. The influence of Islam was marginal.