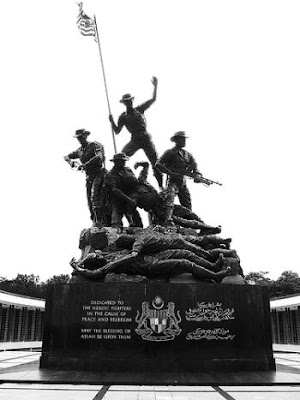 It would have happened sooner or later, for the Warrior Day’s celebration to be syariah compliant. Apparently the Muslim clerics have deemed the military remembrance ceremony held annually to remember our late warriors and the nation’s debt to them as non-halal.

In The Malaysian Insider’s article Ex-servicemen divided over changes to Warrior’s Day celebration we have comments from:

(a) Retired Lt-Gen Zaini Mohamad Said who said: “Moving the ceremony is obviously for the better, I am quite sure it is for the better and will satisfy our multi-religious society.”


(b) Retired Maj Rashid Hassan Basri who said “I hope the celebration in Putrajaya will abandon the old practices; what is the point of playing ‘The Last Post’, it is not ours, it is a Christian tradition.”
While it’s not for me to question the Muslims on their perspective that celebrating Warrior’s Day or better known as Armed Services’ Remembrance Day is akin to idol worshipping I need to correct some errors and in one case, total bullshit, and also to point out what they have missed in their religious-centric pronouncements, as follows:

(a) Not every warrior who gave his life to the nation was a Malay or Muslim. Let me remind you of non-Muslims who were posthumously awarded the Seri Pahlawan Gagah Perkasa like Captain Mohana Chandran al Velayuthan, Warrant Officer 2 Lenggu anak China and many others, and those who were posthumously awarded the Pingat Gagah Berani like Lt Choo Yok Boo and Lt Chang Tat Min.

So while we understand that the Islamists may want to move the location of the service for whatever reasons they have rationalised, please remember some warriors were non-Muslims. Thus it’s presumptuous for Lt-Gen Zaini Mohamad Said to claim that “Moving the ceremony is obviously for the better, I am quite sure it is for the better and will satisfy our multi-religious society.”
Sometimes it’s better not to speak on our behalf as we don’t agree with you, General - it's just that we can't do anything about your nonsense!

(b) The ceremony is about remembering our respect and debts to the late warriors, and not about idolising ot praying to them. Please don’t conflate your religious beliefs with a remembrance ceremony.

Putih tulang dikandung tanah, budi yang baik dikenang juga – that’s all the ceremony has been about, but trust someone to come up with the bullsh*t that it’s akin to idol-worshipping.

(c) The Last Post has nothing to do with Christianity. This allegation is sheer nonsense.

As Wikipedia and a number of other publications tell us: 'Last Post' was originally a bugle call used in British Army camps to signal the end of the day.


The name derives from the practice of inspecting all the sentry posts around such a camp at the end of the day, and playing a bugle call at each of them. The 'last post' was thus the last point of this inspection, and the bugle call signalling that this post had been inspected marked the end of the military day. This custom dates from at least the 17th century.

During the 19th century, 'Last Post' was also carried to the various countries of the British Empire. In all these countries it has been incorporated into military funerals, where it is played as a final farewell, symbolising the fact that the duty of the dead soldier is over and that they can rest in peace.
Where then is the connection to Christianity or Christian tradition?

It is nothing more than a (Commonwealth) military tradition. If Maj Rashid Hassan Basri believes that anything connected to the West is a Christian tradition, then he shouldn't wear shoes (Hang Tuah went around barefooted) or drive a car or a zillion other things that Westerners do.

It’s quite annoying to see people like him jump on the Islamic bandwagon by resorting to nonsense to blame what they support discarding as a Christian tradition.

Tunku Abdul Rahman was the man who had the National Monument built to honour as well as remember our heroes, men who gave their lives for our nation. 52 years have passed with PMs Abdul Razak, Hussein Onn, Dr Mahathir and PM Abdullah Badawi never raising such an issue. All of them were/are Muslims.

Trust Defence Minister Ahmad Zahid Hamidi and Islamic Affairs Minister Jamil Khir Baharom to break half a century of military tradition. I wonder whether they were really conscious of their Islamic beliefs or playing politics.
Posted by KTemoc at 7:25 pm