The only hands I’ve ever kissed were those of my teenage girlfriend – then I was only an 18 year-old teenager full of amour.

Kissing the hands of one’s elders is a lovely Malay custom, showing great respect and also reflecting on one’s upbringing – in other words, a credit to one’s parents for bring one up as a well mannered and cultured person. Penangites praise this as 'oo kar see' or 'have been taught manners well', a highly esteemed accolade.

However, in Malaysian politics, when one is powerful as Tun Dr Mahathir when he was PM (and probably still is) you see many people (not just Malays) rushing to kiss his hands.

If you have seen those scenes, you would wonder whether those hand-kissers were respectful to the PM or just bodek-ful (sycophantically obsequious).

Then, when Dr Mahathir was on the ‘outer’ during PM AAB’s era, he commented that people who once kissed his hands were ignoring or even badmouthing him. That sort of confirmed that those hand-kissers (who subsequently ignored him) were insincere Bodek-ites.

Now Kamalanathan, the MIC (or should it be UMNO) candidate for the Hulu Selangor by-election was seen, in fact photographed kissing DPM Muhyiddin’s hands. Kamal tried to deny it when asked, but alas (for him), he was photographed in that act. 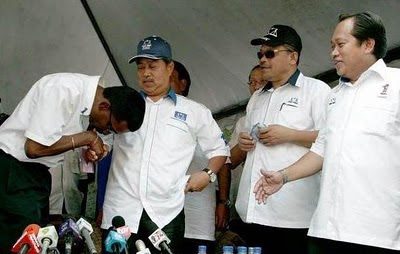 Was he being respectful or bodek-ful?

One, his denial didn't sit very well on the bench of sincerity. He indicated his embarrassment or even shame, so it may be reasonable to assume he only wanted or preferred that to be a private act between him and his patron and not known by everyone.

How could we then consider him kissing Muhyiddin's hand as a respectful gesture?

Two, if Muhyiddin is as old as Dr Mahathir or Pak Haji Nik Aziz, both eighty-ish, then I reckon it goes without saying that it would be respectful to kiss the hands of such elderly people, regardless of whether we like or dislike them on political grounds, as they should be accorded due respect for their age rather than their power.

And that showing respect by kissing an elder’s hand happens to be a Malay custom is irrelevant – good customs should be adopted by all Malaysians.

However, Muhyiddin is hardly 65, let alone 80. He's still a relatively young-ish politician. Somehow I reckon Kamal kissed his hands because he is the DPM rather than for his age or wisdom.

I have no doubt that Kamal will also kiss younger Najib’s hands, but will he Zaid Ibrahim who is more or less the same age group as Muhyiddin and Najib? After all, it would just be showing respect.

No need to do that with Uncle Samy Vellu because he would expect Kamal to kiss his feet.