Help - have you seen Madeleine McCann?

The girl in the photo is Madeleine McCann. She is only 4 years old. 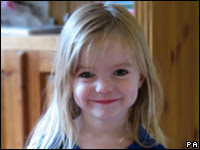 She was abducted on 3 May 2007 from her hotel in Praia da Luz, Portugal. 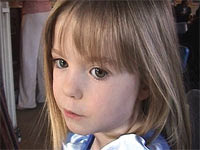 If you see her or have any information about her whereabouts, please contact the nearest police station, or alternatively the UK Crimestoppers on +441883731336 if you're outside UK.

For more information see Missing Madeleine, the official website to find her.

In Britain thousands of yellow ribbons tied in the home village of Madeleine McCann have been taken down amid concerns they are attracting grief tourists.

Villagers say Rothley's main square has become a morbid visitor attraction since they made it the focal point for their collective fears for the little girl.

Now 13 weeks since her disappearance in Portugal residents of the Leicestershire community want to restore some degree of normality and the McCann family has agreed.

The world's media descended on the village after the four-year-old was abducted from her holiday home in the Portuguese resort of Praia da Luz on May 3.

The town square became the centre of attention with messages and cuddly toys left and ribbons of hope tied to railings around its war memorial.

I am going to let this post go from the top position as well; besides the evidence seems to point to Portugal and Northern Africa as the likely places for her recovery, if at all possible. My thoughts continue to be with her parents.
Posted by KTemoc at 6:44 am