27 days to 50 years as a sovereign nation, and what has Malaysia to show?

Well, we are just about to see senior citizens from Bukit Jalil estate – citizens who have made homes out of houses given to them more than 50 years ago when they were brought in to work as rubber tappers – being evicted.

A man or woman’s home is his/her castle, and the grim face of DBKL is staring down at the senior citizens’ ‘castles’ without an iota of compassion, but with tools of demolition at the ready.

One of those unfortunate residents, Nyanameh recalled she arrived at Bukit Jalil 40 years ago with her husband as young labourers soon after Merdeka ('Merdeka', what’s this word again?). 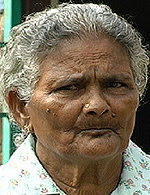 She lamented: “For years, I have worked on this estate tapping rubber. My children grew up here. Now they can just easily tell us to leave. Where can we go?

Got that? ‘Now they can just easily tell us to leave’! Yes, on this 50th year of our nation’s supposed independence from oppression! WTF can I say!

She was fatalistic yet defiant, stating: “They want to break down my house, let them break it. I will stay right here. I’ve been staying here up to now, (this house) is mine. Are they going to give me a house?”

“When I die, I’ll die here. If they break my house (down next week), I’ll build it again once they leave.”

DBKL in typical city-hall mentality quoted the Emergency (Essential Powers) Ordinance 1969 averring the residents are squatters. And if we remember their Hindu temple smashing proclivities, we have to fear not only for the claims of those residents but for their physical safety as well.

For more of DBKL's typical attitude towards 'some' of our citizens, please read:
(1) DBKL smashed statues of Hindu gods!
(2) DBKL staff armed with WMD - Legal?
(3) Another Hindu Temple in KL Smashed!

Dear olde city-hall has demanded that the residents vacate their houses by next Wednesday. The 'or else' is ominously implicit.

The residents are naturally infuriated at being classified as squatters, and demanded that they be treated fairly and accorded their rights as rightful owners of the houses, their castles. They are not obdurately against development per se, but would want to see reasonable compensation for abandoning the houses that have been their homes for over four decades.

“The country has been independent for 50 years, but residents of Bukit Jalil estate are yet to be free.”

Shall we fly the flag then?