If you treat your votes like peanuts, you get monkeys

- paraphrasing, and with apologies to, James Goldsmith
Last year in May I posted Cyclops in Monkey House where I stated that there had been monkey business in the Big Monkey House. Mohd Said Yusof otherwise known as the Cyclops was allowed to behave like an unruly sexist monkey in Parliament the zoo.

The ape made a sexist remark against DAP’s Chong Eng, but was allowed to get away scot free with his ugly unparliamentary behaviour. Opposition leader Lim KS invoked the standing order against Cyclop's sexist and offensive remarks, but no action was taken.

Additionally Lim blasted Cyclops after the latter’s confession he had asked the Malacca Customs and Excise Department to ‘close one eye’ and release a consignment of seized illegal sawn timber. Cyclops also misled parliament without any consequences.

In any western democracy a politician who mislead parliament would have to resign; in Japan they commit sepukku (ritual suicide). In Malaysia, they jabbered around triumphantly as if they had scored points, like the apes they could only be.

Lim made repeated attempts to refer the Jasin MP to the Privileges Committee for probe, but failed. Of course Lim would fail when the PM couldn't, didn't, wouldn't even reprimand Cyclops.

What do you expect? That’s why I call Parliament one BIG MONKEY HOUSE with an unmitigated clown like Cyclops – pity the opposition had to be there.

Then that same year in July, I posted another simian business - read Monkey Business in Big Monkey House yourself - it’s just sickening to see how Cyclops misused the monkey house to gorilla-shove his fractious chagrin by accusing his nemesis, director-general Abdul Rahman Abdul Hamid, of corruption.

Lim KS pointed out that Cyclops had personal financial interest in the issue,and cited Standing Order 35(6) which stipulates “a Member [of the Monkey House] shall not speak in any matter in which he has a direct personal pecuniary interest without disclosing the extent of that interest.”

He accused Cyclops of violating that Standing Orders and committed a breach of Monkey House privilege when he failed to declare his pecuniary interest in the issue.

In May this year I was forced to post MP's menstruation mesmerised motherless monkeys. I sure we all still recall the shameless bocor business.

Today, one of my faves at malaysiakini, Dean Johns, has a new article titled Monkey business as usual

Dean wrote: Umno Youth deputy head Khairy kicked it off by characterising bloggers as monkeys. Then Wee Meng Cheng, a Malaysian mass-communications student at Taiwan’s Ming Chuan University created total uproar by monkeying-around with the national anthem in a satirical rap video he created and displayed on YouTube.

And now the natural resources and environment ministry has announced a lifting of a 23-year ban on the export of wild monkeys, a move that in itself smacks of the customary behind-the-scenes monkey business.

Aah, yes, export licences. So long as there’s money in monyet, and no mention yet of which companies or individuals have been awarded licences or how, no wonder the plot has thus far taken five months to unfold.

Dean described eruditely the brazen double standards of the UMNO government, hounding Wee Meng Chee for his rap whilst ignoring “countless cases of alleged monkey-business involving themselves, their families, cronies, fellow political party members and the networks of functionaries operating under their patronage and protection.”

And he reminded us of a horrific outcome of the AAB government’s poor and selective enforcement of laws and regulations in last week’s crash of a non-roadworthy express bus driven by someone with 13 outstanding summonses and two arrest warrants against him.

Thanks to the moribund bureaucracy, 18 passengers were killed murdered.

Amidst all the corruption, nepotism, cronyism, abuse of powers, maladministration sits he who sees no evil, hears no evil and speaks no evil. 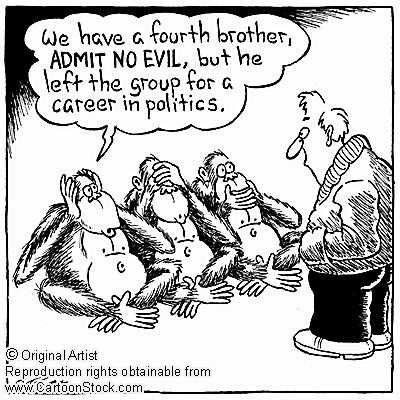