Ku Li warned of May 13 again

More than one and a half years ago I blogged on Ku Li no longer Kool & Kalm! where I lamented that a Tengku Razaleigh (Ku Li), once urbane, charming, cosmopolitan and so open-minded, had to resort to parochial language and tactics just to find a role for himself in Malay (not just Malaysian) politics, namely UMNO, where the real power lies. Ku Li had even challenged AAB for the UMNO party presidential post.

Then, as his manoeuvre, Ku Li had decided to lambast the AAB government, but unfortunately by resorting to that olde UMNO tested formula of divisive ethnic politics.

I wrote: "For a start, he adopted a controversial but old winner by publicly voicing strong criticism of the government in permitting non-Malay language educational institutions such as the Chinese-owned Tengku Abdul Rahman University to exist, a move that would prove undoubtedly a sure favourite with UMNO hardcore ‘warriors’."
Sure enough the Malay NGOs popped out to hail and support him. Then, perhaps as a 'special extra', for that additional boost to his credentials, he bemoaned regrets that the government hasn’t helped the Malays solve their problems despite its (AAB government's) power and authority to do so.

Can you believe him? Well, I wouldn't be surprised if that some Malays, especally those from Kelantan, obviously do!

For an understanding of Malay politics, read my earlier post Ijok - where Malays are even more tribal!

Though later the President of Gabungan Pelajar Melayu Semenanjung (GPMS), came out in damage control for Ku Li when the Gerakan Party accused Ku Li of playing ethnic politics, Ku Li lost a lot of respect and affection from people who had been sympathetic with him. Mind you, I doubt he cared whether the non- Malays stop liking him now.

Well, malaysiakini tells us he’s back at his tribal-oriented spill again.

Ku Li said at a forum on Merdeka held in Kuala Lumur by the Culture, Arts and Heritage Ministry and National Writers Association (Gapena) that Malaysia will descend into chaos if the social contract agreed upon 50 years ago was unravelled.

Nice touch, Tengku, to invoke the May 13 threat at the 50th Merdeka forum!

He urged the government to manage the increasing communal polarisation wisely, such as anyone questioning aspects of that social contract - eg. position of Islam, special privileges for Malays - whatever ‘manage wisely’ means - but no, no need to tell us or elaborate ‘cause we know the ‘whatever …..’.

He declared: “If it (social contract) is to be revamped, I predict the nation will descend into chaos.”

“If the guarantees laid out in it cannot be protected, a situation worse than May 13, 1969 (racial riots) may arise.”
Yes, that veiled threat of 'May 13' again - I am just surprised he didn't also wave a little red book on 'May 13' and mention 'not stirring the tebuan (hornets) nest'. Can these people give the same old tired threat a rest!

I am currently reading a book by Jonathan Glover, who’s (or at least, was) the Director of the Centre of Medical Law and Ethics at King’s College London, titled ‘Humanity – a Moral History of the 20th Century’ - (ISBN 0-224-05240-3 published by Jonathan Cape, London) 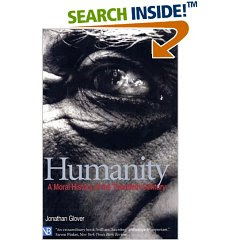 The synopsis on the book’s jacket says “It is about the psychology which made possible Hiroshima, the Nazi genocide, the Gulag, the Chinese Cultural Revolution, Pol Pot’s Cambodia, Rwanda, Bosnia and many other atrocities …..... also examines tribalism: how people in Rwanda and in the former Yugoslavia, people who once lived together became trapped into mutual fear and hatred … .”
On the Rwanda tragedy, his concluding sentence was: “The human responses were overwhelmed in the killers by tribal hatred, but this emotion was itself a product of conscious political manipulation.”
Well, ….....

Then, for the Yugoslav internal conflict, Glover again said: “Tribal conflict rarely just ‘break out’. Hostility is enflamed by the nationalist rhetoric of politicians. Other groups then feel threatened and react with their own defensive nationalism. People are pushed into the trap by politicians. Then, in psychologically deeper ways, the rival groups become mutually trapped by their responses to each other. This is how Yugoslavia fell apart.”


* all above underlining of Glover's statements are mine

Aren’t we? … “pushed into the trap by politician” , that is!

Though I am aware that the general election is just around the corner, and Ku Li is fretting about his Gua Musang seat, he should be ashamed of himself for buying into the current ethnic polemics, again.

He could have been a leader for unity, conciliation and muhibbah, but like most UMNO desperate (‘9.2 million’ of them?), he has decided that for him too, it’s easier going over to the dark side of the force.
Posted by KTemoc at 10:10 am