Ku Li - racist only as and when required! 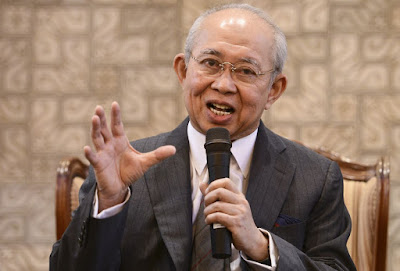 Umno veteran Tengku Razaleigh Hamzah has questioned whether it would be easier for DAP to dominate the political landscape as a result of the Malays being politically divided.

This, Tengku Razaleigh said, is because there are now five Malay parties in the arena.

"Won't this give DAP a chance to 'bermaharajalela' (do as they please) when the Malays are divided and the Chinese are united under DAP's banners?

"Won't it be easy for DAP to dominate us all, conquer us in the next general election?

"I don't think it's that easy. But I think it's logical that some people think that way," Tengku Razaleigh said in an interview with Sinar Harian, which was published today.

The Kelantan prince and Umno veteran said this in response to a question on whether efforts should be made to unite Umno and PAS for the betterment of the Malays.

In the past, the contest for Malay political support had been among Umno, PAS and Malay majority-PKR.

Alamak, Ku Li has now been accused of racism but I believe he has been wronged in this instant, because if we read very carefully, this was what what he said:

In other words, Ku Li was voicing his thoughts on what Malays might be perceiving but he reckoned they are mistaken because that line of thought, about DAP having its own way, was not as easy as believed.

He was giving his considered and reasonable assessment. Just how would that be racist? C'mon, people, let's be fair and not over-sensitive and start accusing UMNO people.

But fair is fair, so we need to ask whether Ku Li is a racist? OK, let's go back to December 2005 (wakakaka, some 11 years ago) when I posted Ku Li no longer Kool & Kalm! in which I wrote (extracts):

One would have thought Ku Li would fade away by now but he wanted to give it one old jolly last go – he decided to assume a double pronged ‘attack’ for a role in UMNO.

For a start, he adopted a controversial but old winner by publicly voicing strong criticism of the government in permitting non-Malay language educational institutions such as the Chinese-owned Tengku Abdul Rahman University to exist, a move that would prove undoubtedly a sure favourite with UMNO hardcore ‘warriors’.

Sure enough the Malay NGOs supported him. Then, he bemoaned regrets that the government hasn’t helped the Malays solve their problems despite its power and authority to do so.

Many who had sympathised with him now feel sad that a man like Ku Li, once urbane, charming, cosmopolitan and so open-minded, has to resort to parochial language and tactics. Every Malaysian knows his accusation of the government not helping the Malays is sheer nonsense. Ku Li must be desperate because that kind of comment is totally out of character for him.

Now, the President of Gabungan Pelajar Melayu Semenanjung (GPMS), has come out in damage control for Ku Li in the face of the Gerakan Party's accusation of Ku Li playing ethnic politics.

He claimed that Ku Li had been misinterpreted. According to him, Ku Li had actually said if the government could entertain the Chinese needs for mother tongue educational institutions from primary schools right up to TAR University, surely it can entertain the Malays' educational requirements as well, and that shouldn't be misconstrued as ethnic politics directed against the Chinese.

They say old soldiers don’t die but fade away. Maybe Ku Li might want to consider that process instead of stirring up dangerous emotions.

I have to say Ku Li's so-called 'racism' has to be viewed within a certain context. Then (Dec 2005) he wanted to enter UMNO's mainstream politics, and much as I disagree with his then undeniably 'racist' tactic, I shall be kind and say that in December 2005 he was desperate in marshalling support for his virtually last-chance ambition to get to the top in UMNO - thus those were words for his Malay constituency in his party.

I would NOT support such a tactic (much as I understand his dilemma) but if it's any consolation for Ku Li's supporters, yes, everyone in UMNO had done that in some way or other, Mahathir, Anwar, Najib, etc, to ensure the old party faithfuls group around their respective banner.

But 2 years after that, that was, in 2007, Malaysiakini informed us Ku Li was back again with his tribal spill again.

Then Ku Li said at a forum on Merdeka held in Kuala Lumpur by the Culture, Arts and Heritage Ministry and National Writers Association (Gapena) that Malaysia will descend into chaos if the social contract agreed upon 50 years ago was unravelled.

Nice touch, Tengku, to invoke the May 13 threat at the 50th Merdeka forum!

But if you read my Featured Post (top of right hand column in my blog), Ungku Aziz informed us that the so-called (fabricated) 'Social contract' was a politically created fantasy.

Yes, in 2007 he urged the government to manage the increasing communal polarisation wisely, such as anyone questioning aspects of that social contract (that old convenient bullshit UMNO contrived ammo) whatever he meant by ‘manage wisely’.

Though at that time I was aware the then general election was just around the corner, and Ku Li was fretting about his Gua Musang seat, he should be ashamed of himself for buying into ethnic polemics, again.

In conclusion I have to say Ku Li is not a racist, but his party politics requires him to be one from time to time, at least in his statements to his hope-for UMNO supporters (public as these might have been).

Regrettably Ku Li became a victim of his own party politics. But that is the nature of our Malaysian beast (politics), unless you aim to retire as Ku Li said he will. Thus I say with confidence he did NOT make any racist comments in his recent interview, apart from reading his words very carefully.