Omne trium perfectum in Latin means 'everything that comes in threes is perfect'. Sometimes it's just termed 'good things come in threes'. 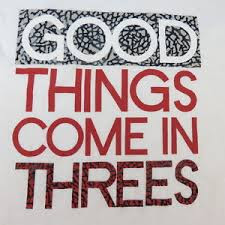 Though I might have been taught this popular saying in school, I recall it more vividly after reading Arthur Clarke's sci-fi classic 'Rendezvous with Rama' where the final sentence of the book stys:


And on far-off Earth, Dr. Carlisle Perera had as yet told no one how he had wakened from a restless sleep with the message from his subconscious still echoing in his brain: The Ramans do everything in threes.

A sweetie I once adored argued with me that it was not 'threes' but 'trees', to wit, 'good things come in trees' like, as she painstakingly explained, mangoes, durians, rambutans, etc. 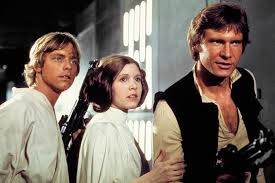 But smart as she was, yes very very smart, I (dungu as I might have been, wakakaka) finally managed to convince her the tree has nothing to do with the saying - for example, what if it was the notorious highly toxic Malaysian Rengas tree, wakakaka - ahem, which may explain why our politics is so toxic, wakakaka again.

One example of 'good things come in threes' would be the 'check & balance' tripodal branches in a democratic government, namely, the executive (cabinet), legislative (parliament) and judiciary.

Alas, in Malaysia we have seen the unfortunate destruction of the independence of our judiciary in 1988 in a constitutional crisis which was said to have its genesis in an UMNO power tussle in 1987 between Team A (Mahathir, Anwar Ibrahim) and Team B (Ku Li, Musa Hitam).

A deadlocked UMNO went to the courts. But a certain 'someone', wakakaka, was pissed off with the courts' decision. 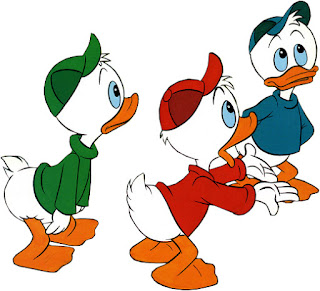 What ensued the following year (1988) saw the ugly unbecoming unworthy dismissal of the Lord President of the Federal Court, Salleh Abas, in a most shameful sickening situation reeking malodorously of scatological 'conflict of interests'.

Twenty years later PM AAB on the encouragement of Zaid Ibrahim, then acting Law Minister, did the correct praiseworthy prime-ministerial act by apologizing on behalf of the government (and presumably UMNO) to Salleh Abas for the wrong done to him. Bravo Tun AAB, bravo Zaid! But did that honorable act infuriate a certain 'someone' even more? Wakakaka.

But there was more - The Malaysian tripodal 'check & balance', besides being weakened by the emasculation of the judiciary, was also pummeled horrendously when the membership of the Dewan Senate (Upper House) was changed by a certain 'someone', wakakaka, who altered the Senate's composition to ensure the states could not deny the will of the executive.

North Korea had then came to town, when 'good things come in threes' metamorphosed into a 'power of One'.

Another 40 senators, regardless of their states, are appointed by the King, also on the Prime Minister's advice. Federally appointed senators must have "rendered distinguished public service or have achieved distinction in the professions, commerce, industry, agriculture, cultural activities or social service or are representative of racial minorities or are capable of representing the interests of aborigines (Orang Asli)".

The intent of the original Constitution of Malaysia, which provided for only 16 Senators to be appointed by the King (thus placing them in the minority) was to give the states some say over federal policy. However, subsequent amendments have, according to former Lord President of the Federal Court Tun Mohamed Suffian Mohamed Hashim, acted "contrary to the spirit of the original constitution which established the Dewan Negara specially as a body to protect in the federal Parliament, state interests against federal encroachments".

And a certain 'someone' has now been lecturing us on ... what? Podah! 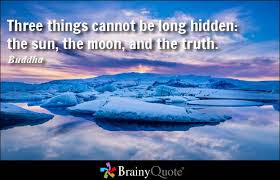 OK, back to 3's, wakakaka. Then there is the safety slogan of 'stop, look & listen' for public road and level crossing. In Australia where very long distance travelling is the norm there is the catchy slogan of 'stop, revive and survive', meaning it's good to stop and rest every now and then, say in every couple of hours or so, before pushing on ...

... and so on and so forth such as in religion: in Christianity we have 'Father, Son & Holy Ghost', in Hinduism 'Trimurti', in Buddhism 'Tripitaka', in Chinese folk religion 'Heaven, Earth & Man', in Taoism 'Ci' (compassion), 'Jian' (moderation) & 'Bugan wei tianxia xian' which literally means 'not daring to act as first under the heavens' (in short 'humility').

Mind, on the flip side sometimes (or most times in Malaysia, wakakaka) you can get stuff like 'bangsa ... etc & etc'. Wakakaka, that's the yang and yin of life.


As they say '3 strikes and you're out'. Omne trium perfectum.