Former deputy prime minister Muhyiddin Yassin revealed that he had been offered plum positions including the governor of Penang.

Of course he boasted he rejected that offer which had also included being the generously-paid chairperson of Permodalan Nasional Berhad (PNB).

But the best part was the following statement by Muhyiddin (also in same article) mulling over his offered Yang Dipertua Negeri-ship in Penang:

“I had even imagined (Penang Chief Minister Lim) Guan Eng in front of me, kneeling and sembah* (prostrating) to me."

* Incidentally, the reporter, sweetie Alyaa Azhar's 'sembah' is translated by MKINI (might not necessarily be her) as 'prostrating', which the dictionary defines as 'to cast (oneself) face down on the ground in humility, submission, or adoration'.

That action seems to miss out the the folded hands a la the Thai 'wai' raised to the forehead in a respectful mark of obeisance. 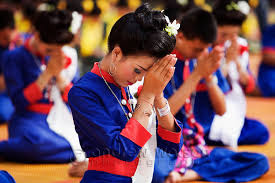 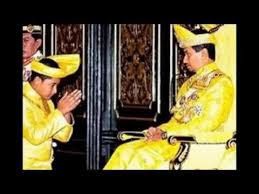 OK, back to topic.

And did he also imagine himself dressed in ceremonial yellow?

Omigosh, had he become Penang's Yang Dipertua Negeri, it's staggering, flabbergasting and preposterous to think he would have expected his audience to kneel and sembah him.

Who the f**k does he think he would be as the YDN of a state?

As a 'Malay First' he doesn't even know his adat Melayu.

Thank goodness we Penangites have been spared this bloke's nonsense. Podah!
Posted by KTemoc at 4:42 pm