PAS leaders were busy during the recent Lunar New Year joining in the celebrations with Chinese locals, with party president Datuk Seri Abdul Hadi Awang tossing yee sang in Perak, while one leader in Selangor dressed up as a Chinese deity and Johor leaders wore red.


The Islamist party was engaging directly with non-Muslims, especially the Chinese, in order to shore up its voter base ahead of the next general election, said a political analyst.

Mohamad Hisomuddin Bakar [the executive director of independent think tank Ilham Centre] believed that PAS had realised that the Chinese vote was the reason it won many of the seats contested in the past two elections in 2008 and 2013.

Two corrections to above extract from TMI, to wit:

(a) as I had posted in my blog and written to Malaysiakini which published my letter as an article titled 'Chinese deity' costume saga: Emperor booby-trapped? the costume donned by Mohd Khairuddin Othman of PAS, the state assemblyperson for Paya Jaras, Selangor, was NOT that of a Chinese deity, but merely a period costume for Chinese emperors of yore, and 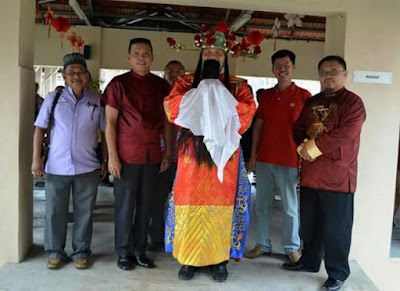 (b) the statement '... PAS had realised that the Chinese vote was the reason it won many of the seats contested in the past two elections in 2008 and 2013' would in my opinion be grammatically incorrect.

Instead of saying 'had realised' it should more correctly be 'HAS realised', wakakaka, because that realisation is only recent.

If PAS 'had realised' the full extent of Chinese support for the Islamic Party in the last two general (and state) elections, it wouldn't have been so arrogant in its ferocious push for hudud which frankly, justified or not, frightened the shits out of the non-Muslim Chinese, who I would say constitute 99.9999% of the Chinese community, wakakaka.

And that could have been why the former Erdogens in PAS, the non-ulama, realizing the party's ulama's politically impetuous or arrogant self-destructing policy declaration, have had a fierce disagreement with the party clerics, resulting in their split and the formation of a new Islamic Party, PAN or Amanah.

The political reality of the split is it has had nothing to do with any DAP scheming or manoeuvring, much as anti-DAP forces have been propounding, but the PAS-Erdogens'-now-Amanah's political survival and expansion.

Now that GE-14 is approaching, PAS (minus its Erdogens) 'has realised', yes, finally realised its political faux pas in scaring away its erstwhile Chinese supporters.

The stats by IIham has in turn been frightening for PAS. IIham stated that with Chinese support principally for Pakatan Rakyat (and with PAS benefitting from/by association with that now-dead coalition): 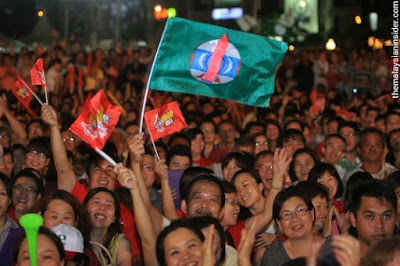 Recall how AAB won by a humongous landslide which if I may remind everyone was chiefly due to Chinese support from their relief and ecstasy over an exit-ing Mahathir, wakakaka.

It was reported that the BN under AAB won 198 parliamentary seats to the combined opposition parties' 20 seats, with one independent. That was why it was considered a landslide.

And guess who brought BN down to less than 2/3 majority in 2008? Wakakaka, and he'll do it again in GE-14. Pakatan should therefore pray to Allah (swt), Jehovah and Jesus, Buddha and Kuanyin, Thnee Kong, Lord Krishna-Siva-Brahma, and all deities for his long life ;-)

By the by, in 2004 PAS retained only 7 of its 27 parliamentary seats, yes, losing a humongous and very painful 20 federal seats.

PAS' state losses were Terengganu state, 17 seats in Kelantan (though still holding a slim majority of 24 there), 7 seats in Kedah, 2 seats in Perlis.

It had then held no seat in Selangor.

Anyway, so Pak Haji Hadi, now realising the Chinese may have some use afterall, wakakaka, had even tossed the yee sang but only after he had tossed the Erdogens out of PAS, wakakaka.

Besides, political analysts have informed us on a number of occasions that around 60 or more parliamentary seats have mixed constituencies that Mahathir had liked in his PM-days, where the Chinese voters could hold the balance in their election outcomes, wakakaka (thanks to the EC).

PAS had (has? wakakaka) been eyeing these constituencies for a fair while as they could well be the key to federal majority rule. Maybe that had (probably) been the Erdogens' argument to belay the hudud push and maybe now Amanah will inherit that aspiration.

Hey hey, recently PAS informed Chinese that Pak Haji's daughter-in-law is a Chinese (or at least was until she converted into a Muslim-Malay like 'kita Melayu' RTA, wakakaka).

But alas, being a spoilsport of sorts, kaytee has to remind everyone that on 22 January this year the Pak Haji, so-called esteemed Islamic leader and touted 'Ng-Knwa', wakakaka, had flabbergasted everyone (except his PAS minions) by saying, as reported by FMT, DAP and Singapore support TPPA as ”Chinese control trade”.

Gasp gulp omigosh, the Chinese control trade? They support TPPA? I thought it was UMNO which wants the TPPA?

FMT reported: In a three-minute video posted on his Facebook today, Hadi accused DAP and Singapore of supporting the trade pact because a single race dominates commerce.

“DAP agrees to it, Singapore agrees to it. Why? Because the Chinese control trade in Malaysia.”

[kt comment: actually DAP agreeing to the TPPA is pure grade bullshit. Penang DCM II Dr Ramasamy had said: "The DAP has made it clear on many occasions that it would oppose the TPPA because of its negative implications on the people."]

He urged PAS’ party members to come out in support of tomorrow’s anti-TPPA rally. “It is the Bumiputeras who are tired of the TPPA.”

For more, see my post Hadi Awang - his true character.

But more interestingly, will the 70.2% Chinese support for PAS in Selangor (in 2013) be maintained to allow the party to hold on to its 15 state seats?

You be the judge! Azmin Ali already has, wakakaka! 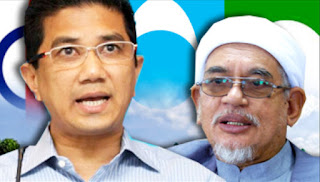