He talked about PM Najib being aware of the new mood of the electorate, and of the Pakatan offering the rakyat the Ketuanan Rakyat as a far more attractive and inclusive alternative to UMNO’s Ketuanan Melayu.

Najib, as Sim observed, attempted to meet the new mood by making and managing the required change to his advantage, in offering a new political ideology to win back the middle ground.

As Sim said: Najib immediately announced plans for Umno's reform. The top party leadership was to be elected directly by the grass-root members in future, to eradicate money politics during party election, a measure that was first mooted by Ku Li.

He then proposed a series of 'liberalisations', and created the new old 1Malaysia slogan. Sloganeering is part and parcel of Malaysian politics, and gullible middle-ground Malaysians with a tendency for wishful-thinking are particularly susceptible to it.

For a while, it looked like the new Najib administration did have a fresh new mask to change the public perception of Umno.

But alas, as Sim noticed: Usually, when the Umno ... boss comes up with a new slogan, you hear it being echoed ad infinitum down the line by leaders at various levels like loyal parrots.
This time though, the various proposals by the new PM were welcome by a deafening silence from his own people.
The only voice was the stinging remark by the former PM Dr Mahathir Mohaham, reiterating Umno's communal ideology, as if to rebuke Najib's 1Malaysia policy.

This is significant. Utusan Malaysia, the bastion of Umno propaganda machinery and official organ of Umno ideology, was seen soon after to make every political issue into racial one, from Teoh Beng Hock's death, to the anti-ISA mass rally on Aug 8.

So, it shouldn’t be surprising to see provocative pieces coming out from the UMNO (perhaps no longer Najib's) controlled media, such as the recent sh*t-stirring invocation to Malays to have a bit of balls and stand up to those arrogant rapacious ‘nons’.

That such seditious incitement of the 'Malays are cowards' article was permitted to be published without a peep from Najib would point to either his complicity in or his helplessness against the insidious untuk bangsa clarion call, the latter case notwithstanding his claim to be a warlord of UMNO.

UMNO die-hards believe that the ethno-centric clarion call could re-marshal the faithful and perhaps more back its keris-ed banner. The by-election results in both Bukit Gantang and Manek Urai seem to support this belief.

Today, another of those seditious incitements published in Berita Harian, was picked up by The Malaysian Insider, titled Kaitan demonstrasi, kempen hentam Melayu — Abdul Rahman Sulaiman

Expect Najib to remain silent on this racist incitement.
Obviously UMNO believes in pursuing its untuk bangsa strategy, which has been why DPM Muhyiddin had described Anwar Ibrahim as a traitor to the Malay race, while the UMNO mouthpieces like Utusan has termed PAS as a tool of the DAP to divide and rule the Malays.

But alas, despite that insult to PAS, people like Dr Hassan Ali and the Kulim Wonder have one way or another convinced UMNO it’s on the right (racist) path.

Sim termed his article The UMNO Dilemma because (as he wrote):

... the racial tirade is also revealing. It shows the inability of Umno to create a new narrative to meet the changing reality of Malaysia. When provoked into action, their reflex reaction is to revert back to the tired, archaic, irrelevant, fossilised and outdated, discourse of their past.

In effect, their racial discourse can only please the believers, but will do nothing to win over converts from the non-believers. It will alienate the Chinese and the Indians even more, thereby negating all BN effort to win back the middle ground.

It all goes to show how hard it is for an old political party that is used to enjoying political hegemony to reform itself when it is on the decline. Simply put, Umno is full of too many warlords with too much political baggage and too much vested interests. It has become like a dinosaur with a small head and a huge body, that finds it simply too sluggish to move anywhere, metaphorically.

Well fine, but where’s the dilemma?

They see the various races as monolithic entities going at one another's throat. Apparently, they are stuck in the time capsule of the 1960s. In reality, there are no such monolithic racial entities. The social economic changes in the country in the past decades have allowed the various ethnic entities to evolve into very complex, diverse, and multi-layered organisms.

I looked at dramatic images of the mostly Malay police force beating down on the mostly Malay anti-ISA protestors, and I see the deep wound inflicted by Umno on the Malay soul. Such a scene was unthinkable mere decades ago! 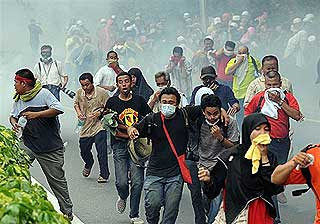 In short, political propaganda must fit some of the reality of lived experience. The chief worry of the Malay men and women, especially those in the urban centres of Malaysia, is the task of keeping or seeking a good job, rising price hikes in all things necessary for basic daily living, avoiding criminals, and the children's education.

In this struggle for survival, many see the government as the culprit of their sufferings, and not the Chinese or the Indians, who suffer alongside them.

I'll be kind to Najib and give him the benefit of the doubt and say, maybe he sees what Sim has said, that in this struggle for survival, many see the government as the culprit of their sufferings, and not the Chinese or the Indians, who suffer alongside them, but alas, obviously not Muhyiddin Yassin and many other top UMNO leaders.

And what do those mutes stung by hornets, namely MCA, Gerakan, MIC, and PPP, have to say?