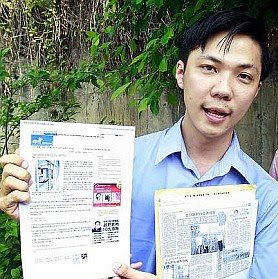 He was taken to the MACC headquarters for questioning in relation to a probe concerning several Pakatan assemblypersons, coincidentally(?) all Chinese Malaysians (both DAP and PKR Selangor ADUNs), ... about their so-called abuse of constituency development funds.

Contrast this to the MACC non-action thus far (it has done f*-all) about the former State (BN) exco each spending RM500,000 in a mere two months. Nor has it moved a millimetre towards investigating the multi-million ringgit Disney foray and the RM24 Bali mansion.

Teoh was hauled in yesterday evening, held by MACC overnight for interrogation, but his lawyer was not permitted to accompany him.

MACC claimed he was released at 3.45 am today but ..... now get this and see whether you can ever believe such an implausible tale ...

... did not go home, and according to a Malaysiakini report in Exco's aide plunges to death from MACC HQ, was claimed by MACC investigation division director Shukri Abdull to be loitering in the building.

Loitering in the MACC building?

Now, why would someone apparently just released (and we only have the words of MACC on this) after so many hours of interrogation still 'loiter' around the place? Who the f* would want to loiter in the Devil's lair?

The Malaysian Insider reported:
His lawyer M Manoharan, who accompanied Teo to the MACC office yesterday, said the deceased looked normal and showed no signs of being under stress.

"He was happy and looked composed. I had advised him how to handle the interrogation as I was not allowed in during questioning,” he said.
Manoharan, who is the Kota Alam Shah assemblyperson, last saw Teo at around 7 pm yesterday.

Ean Yong said it was highly unlikely Teoh took his own life since he was due to register his marriage tomorrow.

"Furthermore, there was no reason for him to linger (after the interrogation) because his car was here."

So ... He was to have registered his marriage tomorrow, and his car was there ...
... wouldn't you think he (like anyone in his situation, a mere 30-year old man) would have made a beeline for the vehicle to get home to his partner?

Let me ask again: Who the f* would want to loiter in the Devil's lair?

One can smell bullsh*t a zillion miles away about his release, his unbelievable loitering in MACC HQ after being held for nearly 10 to 12 hours there (without his lawyer).

Now the bullsh*t gets bullsh*tter. The MKINI report said: 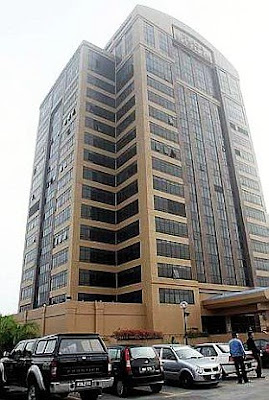 WTF? Teoh loitered or rest at the pantry?
Let me answered my own question with Malaysiakini's headlines, which is Exco's aide plunges to death from MACC HQ.
The event (plunges to death) and location (MACC HQ) are undeniable facts (no escaping that), BUT ...
... the question now must be: what caused him to fall? YES, what?

And all of us, includng the PM, knows that the single common denominator with such unexplained MYSTERIOUS deaths has been their occurrence in the custody of authorities (police and now MACC).
Posted by KTemoc at 8:27 pm