My good blogging peng yew, Lucia Lai of Mental Jog, has tagged me to write about a place I would love to visit.

I have to admit I struggled a bit before I arrived at my final choice – too many wonderful places to go to, like Machu Picchu (for its mysterious temple), Egypt (for the pyramids and the temples and a cruise on the Nile during a full moon night), Turkey (for the ruins of Ilium or Troy), Nepal for a trek, etc.

Anyway, I finally decided I like to go to Mongolia first, to ride a powerful bike with a good mate across its virtually featureless flat steppes. We would start off in the East and cut across the world’s 2nd largest landlocked country, until we reach its highest mountain at its western border. Nayramadlin Orgil is 4374 metre high. 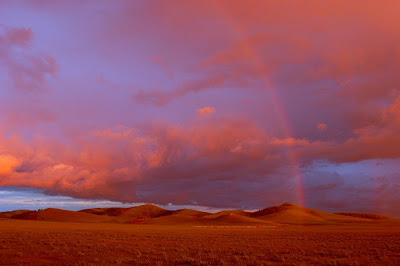 Mongolian steppes at sunset
First thing first, we would have to pack our bikes with the basic necessities, like several cases of beer, half a dozen bottles of whiskeys (Cragganmore, hopefully), plus many bars of choc-ies (Cadbury of course) and a few kilos of wasabi-ed macadamia nuts. 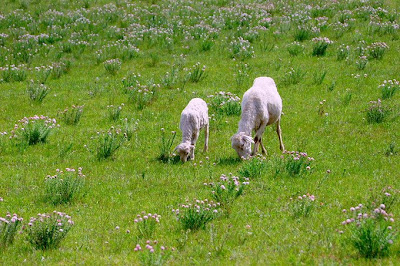 Then we zoom off. To many, riding across the steppes may be boringly monotonous but we are a pair of whiskey/beer swilling ascetics, relishing the wide quiet immense open space with no concerned girlfriends to caution our imbibing - hah, no sound except the roars of our bikes which soon merge into the greater silence.

Here and there we see horses. They look wryly at us, but only momentarily, as we are just two noisy asses. Apparently, Mongolia has the most number of horses per head of population in the world. Then there are the typical animals of the desert/steppe people – sheep, Bactrian camels (two humps), yaks (I wonder how they taste?), the occasional eagle or hawk floating in the blue all-too-bright sky, assessing us as potential carcasses (marinated with alcohol and cocoa beans). 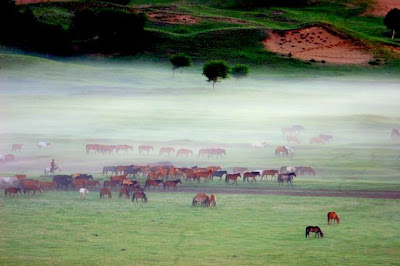 Two-thirds of the year, Mongolia enjoys or suffers from cloudless skies.

Perhaps after a week or so into our ride, we too, like the roaring of our bikes (the loads much lighter by now as some fluid in the bottles had ‘evaporated’ over the days), merge seamlessly into the deep silence of the seemingly endless steppes. We must be at ONE with the universe, the yang and the yin in perfect harmony and becoming the TAO.

Then, in this metaphysical state, it may well be that a slight shimmering occurs, giving me a mild but brief sensation of prickliness as if I have been affected by some kind of electronic flux – and without realising it, I appear to have passed through some form of invisible gate into a new dimension - a gate not unlike Stargate but related to time rather than space.

Suddenly I sense someone beside me, and glancing to my left I see him, a warrior on his horse galloping just beside my bike. He carries a bow slung across his back, while a sword nestles by his side. But a few seconds later, there are two of them, the second rider a smaller figure.

I stare rudely at them, but focussing on the second rider as I become more and more aware of the lovely curves beneath, and despite, the thick sheep skin clothing. Immediately KTemoc slows down, allowing Ray to shoot ahead oblivious to my new companions from a different time. Soon I bring the bike to a halt and the man rides up to me and leaps down from his steed.

He starts talking to me in Khalkha Mongolian. Strangely I can understand him. He says: “Welcome to Mongolia, stranger on strange noisy steed.”

Being shy (as well as dumb) I remain silent with my mouth wide agape like a landed fish in a landlocked country.

Then, she too walks up to me and smiles: “I am Sarantsatsral.”

“Sarantsatsral?” I coo like a lovesick yak! “What does it mean?” 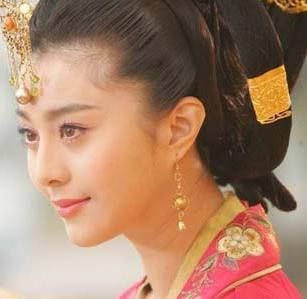 Oh, her smile lights up even the already bright Mongolian day.

“This is my uncle, Temujin. Some call him Chinggis.”

Gulp! Genghis Khan! Good grief, this man murders, loots and plunders all the way to the Rhine in Europe. And I am making eyes at his niece!

Chinngis glares at me and says “KTemoc, stop bloody dreaming and let’s move on or we won’t make the village before nightfall.”

I snap my head around and there’s Ray impatiently revving his steed … er … I mean bike.

I whip my head back but they are no longer there.

“Hey Ray, the steppe’s immense silence and vast emptiness are getting to me. I thought for a while I went back into time, you know, sort of like what-his-name, that Michael Fox character …?”

Ray smiles and says “Those moonbeams from last night getting into your head, mate? You need some fluid? Yeah, get yourself rehydrated”, and he roars off.

Yes, Mongolia sounds just perfect for my next holiday.

***
photos (except for Moonbeam) from someone who emailed them around to show off his or her Mongolian holidays - boy, was I envious ... grrr

***
Proposition : Where do you want to go Next, OUTSIDE OF YOUR COUNTRY, for tourism, work, study, whatever.

Requirements: Find some info about the place, itinerary etc, pics/photos if possible so you get MORE traffic coming in, and maybe some people can find somewhere to go to. Excludes your NEXT DOOR NEIGHBOUR, i.e. a country that borders yours.


Tag Mode : Chain Link. 15 of them.You leave 15 people and their DEEP LINK of their Blog Name and TAGGED POST and hit out for five more. So it will look like:

I pick for this writing exercise - am leaving this blank until they respond
Posted by KTemoc at 10:10 pm