I penned Malaysian Morons slightly more than 2 weeks ago, when I wrote: Malaysia will have a hard time selecting the 3 MOST abysmal stupidest moronic idiots encountered, ever! 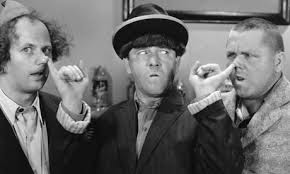 Then I nominated 3 names for a list of abject notoriety which I believe will make the lowest grade ever for a human with intellect (or to be more correct, no intellect) in Malaysia, namely:

I propose to add on to that notorious list of wannabe morons, as follows:

1. The Malaysian Health Ministry for offering US1,000 (RM4,300) for the best video clips explaining how to "prevent" homosexuality and transgenderism.

When contacted, Health Minister Dr S Subramaniam said through his spokesperson that he was not aware of the contest and declined to comment. Other ministry officials were also mysteriously unreachable, wakakaka.

That means they, including the minister, lack the bloody balls to put a stop to the ministry's moronic rubbish (by someone powerful or too holy a 'sacred cow'?).

Sheesh, I wonder what the minister of a ministry is for?

I could have loaned them (namely, the minister and officials who buat diam2) Raja Bomoh's two coconuts which are easily picked up in Johor.

(note: JAKIM, JAWI and JAIS also do not have the balls or coconuts to put a stop to said Raja Bomoh in their respective states or federally). 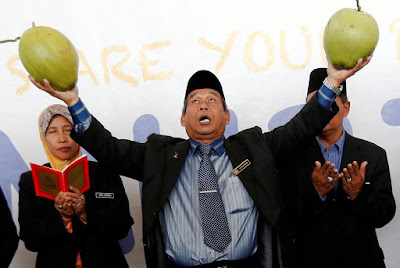 An aspiring university graduate should consider writing a doctoral thesis on the waste of public funds paying the salaries of officials who dreamed up such preposterous pathetic pariah-ish nonsense, including the wasteful Lowyat2 (is it still rental free?).

Another aspiring graduate, that is, could also write a dissertation on the obsessions of Malaysian religious and religiously-inclined officials with sex, sex and sex (and of course, the all-important gravy trough). 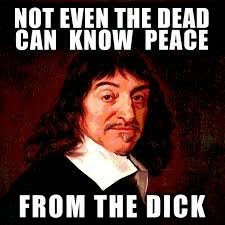 PETALING JAYA: PAS has reasserted its call for a ban on alcohol on all Malaysia Airlines (MAS) flights following the case of a drunk and abusive passenger who had to be tied up after she insulted flight crew on a KL-London flight.

PAS Youth deputy chief Ahmad Fadhli Shaari asked if the airline was waiting for one of its planes to crash due to an intoxicated passenger before acting to remove alcoholic beverages from its menu.

Fadhli said it was time for MAS employees to urge the company’s management and government to make a drastic decision on the policy to serve alcohol during flights.

We must send this "aircrash expert" to sit on the ICAO flight safety section's panel so that he can "educate' those so-called aircrash experts there. Here in Malaysia, in PAS itself, we have a "genius" who has found the answer to airplane crashes.

Apart from the flight safety dangers of alcohol served in cabins, he will no doubt recommend prohibition of khalwat-ish proximity among passengers, even for married couples regardless of whether they carry marriage certificates or not, as proven in the recent JAWI case - read here on JAWI's refusal to apologise for arresting a married couple for khalwat.

Oh, we mustn't forget burqa for the stewardesses - wait, wait, sorry lah, nope, there should NOT be any stewardess on MAS flight. Only ulamas and Raja Bomoh are permitted.

“It has never been the practice in Sarawak before for the state government to set aside allocations for the opposition state assemblymen to service their areas,” the local government and housing minister said after handing over grants to 37 non-governmental organisations at SUPP headquarters here.

He told reporters that a delegation of Sarawak DAP state lawmakers, led by its chairman Chong Chieng Jen, had met with Chief Minister Datuk Amar Abang Johari Openg on the sidelines of the State Assembly session last month, requesting the state government to set aside allocations for the opposition-held constituencies.

“The chief minister did not make any commitment, but he would study the matter,” he said, adding that there is no reason for the DAP state lawmakers to be unhappy with no allocations setting aside for them to service their constituencies.

He said Chong and other DAP assemblymen should jump to SUPP if they want “so badly” the annual allocations from the government.

“We will welcome them very much if they decide to join us in the Barisan Nasional,” he said.

He would, wouldn't he!

(He must be a rocket scientist, wakakaka).

“Each Barisan Nasional assemblyman can ask for more allocation if the total amount of RM9 million is not enough to service their constituencies,” he said.

Apart from the funds allocated under RTP and MRP, Dr Sim said Barisan Nasional-held constituencies are also given allocations from the state and federal ministries.

Sim Kui Hian seemed to think state or/and federal monies belong to his ancestor or his CM's ancestors. Only a moron would disregard that public money is for the public. How did this bloke become a politician?

Secondly, just for argument, no politician has or had ever won an election with 100% votes (unopposed means we don't know who would have voted for or against a candidate).

Sim is from Sarawak thus he may not know what I mean when I wish him 'Podah'! 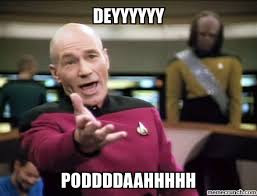