Malaysia-Today - Karamjit Gill's PAS has become the most sought after party addresses some issues as to why both UMNO and PKR have been wooing the Islamic Party which until recently had been ostracized by most political parties because of its hudud-bent intransigence. 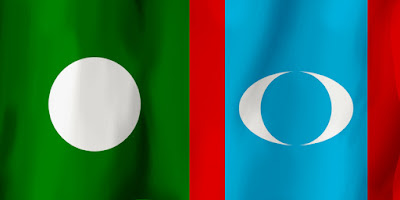 PKR’s deputy president Azmin Ali has rebuked Amanah and insisted that they will continue to coalesce with PAS. DAP’s aggression to sever PAS from the Opposition pack has once again fallen flat. On the other hand, Prime Minister Najib Razak has expressed excitement with positive gestures towards a PAS-UMNO relationship. PAS has suddenly become a MVP and which side they will trade-off eventually remains to be seen.

What is happening today is so bizarre considering the fact that not long ago both Pakatan and BN were distancing themselves from PAS when hudud implementation became an issue. What has PAS done to make themselves relevant again?

But Karamjit has been far more secular than kaytee, providing instead puzzling questions as follows:

It comes as no surprise that UMNO intends to work hand-in-hand with PAS for the simple reason of ethnic dominance. However, what fails me is Azmin’s insistence to keep the relationship with PAS going.

PAS has disappointed Pakatan on numerous occasions. They were never on the same page with Pakatan when it came to no confidence vote against Najib. Neither were they in support of rejecting BN’s Budget 2016. In fact, they have even indicated their intention of contesting against DAP in the upcoming general election.

Indeed, why is Azmin insisting on allying PKR with a pro-UMNO anti-DAP party, considering PKR purports to be part of Pakatan? Why is Azmin so keen to sleep with a known enemy of Pakatan?

My personal take (okay Karamjit my dear bhai, you can now take a break) is that PKR needs PAS far far more than it does DAP to remain alive as a political party, but that is not say it doesn't need DAP as well.

Say in a head-on clash with DAP in most urban constituencies, I believe PKR will lose badly; PKR now enjoys some urban support because it has been seen (since 2008) as an ally of DAP - I have to admit the alliance (with the occasional fights and spites) came about thanks mainly to Anwar's personal rapport with the DAP leadership, particularly Lim Snr and Jnr.

But if push comes to shove, in a serious confrontation with DAP (now that Anwar is not around and Azmin is the virtual undisputed PKR boss) PKR will lose to DAP in most cases though there may be some exceptions.

I admit I may be biased but I believe I'll not be too far off if I say DAP will likely be their preferred choice.

In places like Pantai Lembah, PKR of course will come up tops - mind you, not that DAP will contest in that seat, wakakaka.

But in federal constituencies like, for example, Bayan Baru and Nibong Tebal in Penang, and Pandan, PJ Selatan and Kelana Jaya in Selangor, and even Batu in KL (wakakaka), regardless of whether these PKR candidates will win they will nonetheless be very vulnerable. Some may even lose to DAP but most will be hard pressed to survive against a 3-corner fight with BN and DAP.

As for Penang state, PKR's Ong Chin Wen (Bukit Tengah), Cheah Kah Peng (Kebun Bunga), Dr T Jayabalan (Batu Uban), and Lee Khai Loon (Machang Bubuk) will be similarly threatened, even disastrously, if PKR and DAP were to split asunder. Yes, MCA/Gerakan may possibly benefit from the 3-corner fights though I'm confident DAP will pick up at least two of the four seats, enough to form government by itself even assuming the PKR Malay ADUN do not elect to cross over to DAP a la Dr Bari.

I hope it won't come to such a situation but if it does, then that will spell the end of PKR rather than DAP as a force in federal politics.

In rural constituencies PKR in the main won't have a chance against UMNO or even PAS, and that's why it needs PAS as it needs DAP to stay alive.

But then how will PKR be able to settle itself in a political alliance with two parties who are bitter foes? And why does PKR favour PAS over DAP? Why is it prepared to ignore DAP while flirting sluttishly with PAS.

In the glib words of Mat Sabu used against PAS in the latter's flirtation with UMNO: "... it was natural for Umno to do the courting because "they are males". But why lift your skirts to show your thighs? If you do that, these men will come to tackle you."

PAS shows its thighs to UMNO while PKR shows its kang-kang-ish thighs to PAS? Hmmm, who gets the better deal? Wakakaka!

But Azmin has assessed the triangular situation rather well. In his insistence on staying pally-buddy with PAS despite and much against DAP's pleas he must have assess/believe he can tweak DAP's nose (wakakaka) because he and hundreds of thousands of Malaysians are aware the DAP (unlike PAS) is known to be over-keen, nay, in fact over-obsessed with bringing down the BN federal government, indeed so keen that it is prepared to form an alliance with anyone opposing Najib's BN, even Mahathir wakakaka.

Thus DAP is likely to be far more accommodating and prepared to compromise because it is too super-keen in having a coalition, especially with a Malay-based party, which then and only then will be capable of defeating UMNO.

'More accommodating' means the DAP is even prepared to be shagged by PKR, wakakaka, though under certain conditions and circumstances, wakakaka again.

OTOH, PAS is more patient in its ultimate objective of defeating UMNO to become the ruling government authority, and not as super-obsessive as DAP, who would desire an alliance of whatever form just to change federal rule. PAS' more immediate/urgent objective is to destroy Amanah (and to an extent, also punish DAP).

So PAS is prepared to eat kuachee (dried melon seed), wait patiently, and if/when necessary, ally itself with UMNO to achieve what it wants to achieve, to wit, firstly kill off Amanah, then kill off UMNO/PKR, and eventually implement a pure Islamic State in full compliance with syariah laws (inclusive of hudud) - kowtim and f* the nobody DAP.

Thus PKR sees the current PAS as not so accommodating as DAP and which must be mollified.

In a certain way PAS has the same obsession as DAP except its is more about whacking Amanah and not UMNO, while DAP has the opposite desire.

And that's how Azmin Ali sees the cards on the tables, that in his own desire to reach Putrajaya to become PM, he must first ensure his PKR stays alive.

PKR could only send Azmin to Putrajaya as PM if it wins in GE-14, but it can only survive let alone win by wooing and allying itself with PAS (which is lukewarm, at least for now, about defeating UMNO).

OTOH, PKR can afford to shag an obsessive DAP in the back most of the time, knowing DAP will swallow its pride, balls and even rancid satay just to keep PKR in Pakatan, so Azmin plays his game accordingly.

The only possible peril in this game for Azmin and PKR will be if DAP rids itself of its political addiction, comes down to earth and pushes the overthrowing of the BN majority rule into a more strategic timeframe (like PAS), and deals first and foremost with the far more dangerous treachery of PKR.

But even in this regard, DAP must not overreach. It should start off modestly in Penang where it has much strength, whereas the current situation in Selangor may be just a bridge too far for DAP to achieve this with just Amanah by its side.

In Selangor the DAP can play the role of a strong opposition against a likely PKR-PAS-UMNO coalition state government, while it builds up its MAlay membership and alliance with Amanah.

Good things come to those who wait. Will these be for PAS or DAP? Wakakaka.