Do we have a Malaysian Opposition Leader?

She allows her deputy president to deliberately ignore the existence of Pakatan Harapan in Selangor ... so as to please PAS, but which will inevitably render apart the coalition (and if Azmin Ali says there is no PH, then what coalition?) and its dreams of assuming majority rule post GE-14.

Really, is there any point in DAP and Amanah hanging on to a hope PKR will come to its senses vis-a-vis the 'bigger picture'?

Wan Azizah seemed to be in a (political) slumber regarding the passing of the NSC bill.

And she was in a similar comatose regarding her 'admiral too long out at sea', until the political scene went so ferociously pissed off with the outrageous views of her party's Lumut MP that she was compelled to come out (seemingly reluctantly) to say 'something', but then only with a pathetic excuse for the seaman instead of a resounding repudiation and criticism of such a misogynistic medieval mafulat-ish view.

In the same process she insulted the nation's sailors, perhaps unwittingly but in a terrible sexual sense.

Her daughter was allowed to pose cozily (in sheer unmitigated inexcusable bad judgement) with an alien whose notorious father, so-called Sultan Jamalul (Kiram) III, had already boasted of being responsible for the foreign intrusion in Sabah which saw a number of our policemen slaughtered and mutilated in the most heinous barbaric manner, ... and all these without a word of admonition from her as either party leader or mother. 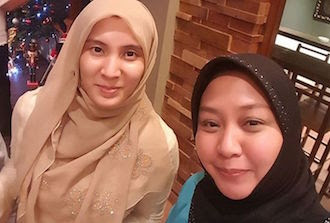 Then her party VP and Information Chief had the outrageous temerity and effrontery to lecture to us that the Kiram family are not terrorists, thus TC's angel-in-our-midst is completely innocent, ipse dixit, wakakaka.

But what a horrible representation of the party's view of our security problems in Sabah. But then he did bite a policeman, didn't he?

As if that was not enough, the kang-kang taxi-sapu party's upper echelon leadership went ostrich-like in its attempts to whitewash the bizarre fact of its party whip in Penang abstaining from an important Pakatan stand against the state opposition motion.

Can you believe such a bizarre happening, a party whip so undisciplined as to deliberately ignore a party line on a motion? Wakakaka, only in PKR!

But dearie dearie me, just how in the world are voters going to believe in the integrity and reliability of a party's policies and promises when the party, especially its bizarre party whip, couldn't even uphold party discipline and unity on a policy stand in parliament, even at state level?

And worse, the party's state leader Rashid Hasnon was kept completely in the dark by the 5 recalcitrants and their Pearl-Habour-like intentions.

Indeed, we can only commiserate with poor Rashid Hasnon, Penang's DCM I, for being embarrassingly played out kau kau by his own party whip and 4 others, and yet, nary a single word of chiding from party HQ which instead went into silly childish damage control with its bullshit on 'conscience voting'.

Ya men, with its bullshit 'conscience voting' (not applicable to Chegubard of course, wakakaka), PKR is now only as good as a bunch of Independents yang masing2 buat suka & syiok sendiri saje!

How can we voters then rely on its stated policies when its individual politician can do what each like in total disregard of party stand?

It's timely because the DAP is in need of experienced dedicated and conscionable Malay politicians. And it'll be okay to change party (together with your seats, wakakaka) since the PKR party president Wan Azizah herself welcomed Kamaruddin Jaafar, a PAS MP (Tumpat) when the latter moved over to join PKR, together with his federal position, wakakaka.

Assuming PKR is still in the new Pakatan Harapan, that is, if its sluttish kang-kang self doesn't elope with PAS to Sungai Golok* wakakaka, does PH still hope to takeover Putrajaya in 2018? Taan kookoo lah! (tunggu sj selama2nya)

* in 2010 Star Online reported: An average of four Malaysian Muslim couples solemnised their marriage (nikah) in southern Thailand every day during the first quarter of the year. Most of the cases were polygamy without the knowledge of their first wives, reported Berita Harian.

Maybe someone like Mat Sabu if Amanah promises to not raise the syariah laws as being equivalent to our civil (secular) laws and not resurrect the hudud issue.

I would even be prepared to accept someone like gasp gulp omigosh Azmin Ali if he is not so kiasu as to continue flirting sluttishly with PAS, to ignore that cohort of ulamas and to focus on building up Pakatan Harapan (minus PAS).

Wan Azizah must be allowed to retire from politics and devote herself full time to the needs of her husband, because with her as coalition leader, Kapal Diraja Pakatan Harapan is still stuck in dry docks, even with an 'admiral too long out at sea', wakakaka.