Nowadays the word 'polyglot' would remind me of Hang Tuah, mainly because once Dr Azly Rahman wrote about Malaydom's most famous warrior (or most notorious, depending on your political philosophy) being that in his article titled a most tongue-twisting (wakakaka) Neo-feudalism of the cybernetic Malays, specifically on the influence of the legendary Tuah on the Malay psyche. 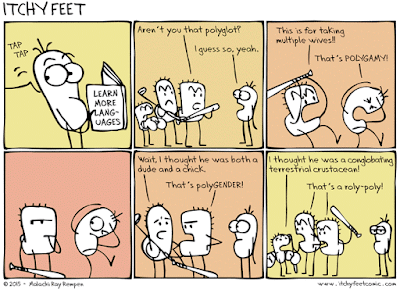 Dr Azly wrote: “The concept of a hero in Malay society is enshrined in Hang Tuah, the most popular symbol of the warrior-class in Malay history; the good ‘polyglot’, the magical-mystical Malay hero who pledged blind loyalty to the Sultan. The image of the warrior-blind loyalist is well-inscribed into the literature and consciousness of the Malays”.

Re above paragraph I am not going into the eternal dilemmatic question of Tuah's loyalty to a tyrannical sultan versus his bizarre treacherous disloyalty to his best friend, someone who had actually defended Tuah's honour by defying and rebelling against the sultan's cruel tyranny.

My interest in this post is more on the word 'polyglot' which incidentally means 'a person well-versed or in command of several languages'.

It has often set me wondering what were the languages that Tuah knew and used.

We have been informed that Tuah was born in Malacca, and started life as a woodcutter. He learnt silat and some form of meditation from his sifu, a sage by the name of Adi Putera.

Next we knew, Tuah was already an admiral in the confidence of the Malacca sultan, travelling with the ruler to Java where he somehow (against the legend of a magic keris) was able to defeat Taming Sari, the eponymous owner of said magical keris.

Well, the legend which surely must have been bullshit and proven so by Tuah himself, was that the keris Taming Sari would make its owner invincible or undefeatable, but yet on two occasions, Tuah was able to defeat the respective owner of that very keris.

Firstly, he defeated the Javanese warrior Taming Sari, owner of said magic keris, and was thus presented the keris by the Javanese ruler for his feat. Next, he killed his friend-enemy, Hang Jebat, despite the latter being in possession of the keris.

Today some provided explanations for that contradiction, not unlike latter-day Christians explaining away mysteries or horrid and unjust scenarios in the bible to budak2 kecil, eg. Jephthah sembileh-ing his daughter as a human sacrificial offering to Yahweh, or why Judah was not executed for the profane crime of lustful incest with Tamar his daughter-in-law, wakakaka.

Yes, they suggested that Tuah had somehow tricked the owners, respectively Taming Sari himself and Hang Jebat, of possession of the keris thus rendering them no longer invincible.

If so, then Taming Sari the keris did f*all in ensuring its two owners were really invincible including not succumbing to being conned like budak2 kecil, wakakaka.

So back to the post's thread, what were or would have been the languages that Tuah was well-versed in, remembering he was no doubt a great fighter but nonetheless one who was an uneducated woodcutter?

I think we'd be safe to say that likely he spoke Malay (wakakaka), perhaps even Thai though this might be a wee doubtful, and presumably some Javanese. In his time there was no such thing as Indonesia nor Bahasa Indonesia.

But I reckon there would have been more languages in his command to make him earned the distinction of being a 'polyglot'.

Perhaps he spoke Chinese as well as he was said to have travelled to China as a Malacca emissary, though whether the Chinese he spoke was Mandarin, Canto, Hokkien, Teochew, Hakka, or perhaps many or all of the mentioned, was unknown.

If he did speak Chinese, this would bring us dangerously close to a contemporary myth that Hang Tuah could have been Chinese, profiled as possibly a kungfu-skilled imperial bodyguard to Princess Hang Li Po who was sent by the Emperor of China as bride for the Sultan. And after being domiciled in Malacca for years Tuah picked up Malay and even Javanese.

The idea of Hang Tuah being Chinese must be a repulsive suggestion and totally unacceptable to Malays, especially today's Malays wakakaka. Personally I have to admit I don't believe in this myth.

Leaving aside for a moment the dilemmatic question of Tuah's heroic status vis-a-vis his dodgy character in that troubling duel-to-the-death with best friend-worst foe, Jebat, how could Malaydom's greatest hero be a f* Chinaman? Wakakaka.

It's not unlike the traumatic identity situation of the Jews' greatest hero in the 1930's. Then Sigmund Freud, a Jew himself, showed another side to his fame which most Jews wish to hide, wakakaka.

Freud might not have been the first scholar to point out that the Jews' greatest prophet-hero, Moshe (Moses), he of the 10 Commandments and the Parting of the Red Sea, was not a Hebrew nor an Israelite, BUT an Egyptian. But I suspect he was the first Jew to do so.

BTW, the ulama in PAS should not get a hard-on at this stage (wakakaka) because Moshe though an Egyptian was NOT an Arab nor a Muslim, as would be most of today's Egyptians.

Moshe, if a real person, was an ancient Egyptian which no longer exists as a distinct race today.

The Book of Exodus (like the other Books of the Old Testament) shows so many discrepancies and inconsistencies that many wonder why or what the authors were up to. Freud, having noticed the puzzling way the biblical personalities and events were written up, wasn't one to remain silent.

As a Jew, Freud was invariably interested in the story of the Jews’ greatest prophet. But he wasn't satisfied with the biblical tale. He might not have been the first to notice the weird and bizarre discrepancies, but as mentioned above, he was probably the first Jew to put his observations into print, namely that Moshe (or Moses) was not a Hebrew nor an Israelite but an Egyptian.

In 1937 he published his thoughts on the matter in a book titled Moses And Monotheism, in which he also wrote on his personal feelings regarding his exposé on Moses:

"To deny a people the man whom it praises as the greatest of its sons is not a deed to be undertaken light-heartedly, especially by one belonging to that people."

He agonised that as a Jew, he was about to disabuse the Jewish people with his discerning observations on the true origin of their greatest prophet.

In fact, many Jewish leaders at that time begged him not to publish the book but then, as an academician he wasn't persuaded to hide what he thought was a plausible assessment. Even till today, many Jews are still angry with him for stating that Moshe wasn't a Hebrew nor Israelite - oh no, surely not one of those hated Egyptians?

Fortunately for Malaydom, thus far no Malay with impeccable academic credentials has wrote of Tuah as a Chinese. Only the Internet, where some articles would only be as good as perbualan kopitiam, had suggested this possibility.

But the term 'polyglot' still troubles me.

Okay then, what about the Indian (Tamil) connections?

We know that the Tamil (Muslims) had powerful presence and influence in the Malacca Sultanate, with two Bendahara (PM of yonder days) being of Tamil origin, Bendahara Sri Nara Diraja Tun Ali and Bendahara Seri Maharaja Tun Mutahir.

We take it that those Tamils were fluent in Malay to be able to officiate as the Sultan's Bendahara, and no doubt would have still spoken in Tamil at home or in private, as some UMNO branches (especially in Penang) have been alleged to have conducted their entire meetings in, wakakaka.

Maybe instead of Tuah being Chinese, he was Tamil, thus speaking Malay, Javanese, Thai, Tamil, and even Malayalam, Telugu, etc?

There is actually an academic hypothesis that Hang Tuah and his 4 brethren-in-arms (the 'Lima Sekawan' of my primary schooldays' history reading, wakakaka) were based on the 5 Hindu warriors of the Mahabharata, presumably the Pandava Brothers or even their cousins-foes, the Kauravas.

Coincidentally there were five significant/renowned warriors in each respective family. The Pandava Brothers were Yudhishthira, Bhima, Arjuna, Nakula and Sahadeva, while the well-known Kauravas (out of Dhritarashtra's 101 sons) were Duryodhana, Dushasana, Vikarna,Yuyutsu and Dussala.