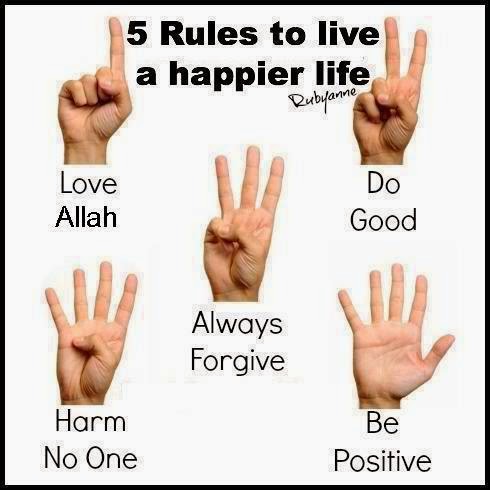 Often we non-Muslims have been told we won't be affected by the implementation of hudud, for the Islamic code of punishments only apply to Muslims.

Often we non-Muslims have been told to butt out of Islamic/Muslim issues for they don't concern us, nor are we qualified to comment on them.

Okay boss, but anyway let me reproduce extracts of a Free Malaysia Today's article, as follows:

A normal khalwat case, you may assume.

But Halimah was and, last I heard, still is a Christian, a Catholic Christian. The title of the FMT article was
Christian woman wants khalwat case dropped before retrial.

And she's right too - why should a Christian be charged let alone convicted in an Islamic Court for violating an Islamic rule?

Whoever the smart alec was (wakakaka) who was said to have inducted by stealth(?) more than a million Indons into our country more than two decades ago to 'balance' up the ethnic breakdown in Malaysia's population might have forgotten that Indons unlike Malays weren't/aren't all Muslims.

And it seems our mullah-brownshirts in Penang could have also suffered from that same ignorance in arresting and charging and convicting Halimah, an Indon Catholic, for khalwat.

Indons could well be Christians and Hindus, with Buddhists only a minority. During Suharto's days, the officially approved 5 religions of Indonesia were Islam, Hinduism, Buddhism, Catholic Christianity and Protestant Christianity. In those days when the military was running the show, ABRI (Angkatan Bersenjata Republic Indonesia) further allowed its anggota-anggota berkaum Tionghua to be Taoists and Confucianists.

Their aim in specifying approved religions was to deny Communism any foothold in their society. Alas, they didn't approve of relatively less known religions such as Bahá'í or I suspect too, Orthodox Christianity or wakakaka, definitely Atheism or Ayah Pin-ism.

Okay, just to reiterate what had happened at a spa in Jalan Seang Teik, Penang on 08 Dec 2011, two non-Muslims (repeat, two non-Muslims) were engaged in physio-therapeutic session [cha-kuat, that's in Canto wakakaka], and one was charged with the syariah offence of khalwat.

Let's hear what Cecil Rajendra, one of Penang's foremost modern poet and a fave of mine, said, as reported by FMT:

Lawyer Cecil Rajendra, who is holding a watching brief for the Malaysian Bar Council, insisted the case should not have gone to the syariah court because Halimah was a Christian.

He noted that under Section 74 of the Penang Religious Enactment Act, the syariah court has no jurisdiction over non-Muslims.

Rajendra said despite this the syariah court went on with the trial and only took action when the Indonesian consulate general intervened.

He said the case showed that syariah law enforcers, prosecutors and judges had all broken their own laws.

He added that Halimah’s case had manifested the sort of justice that non-Muslims could expect under the hudud laws, if implemented.

“This case should not have come up for trial in the first place, let alone a retrial. It’s a miscarriage of justice,” said Rajendra.

Well said Cecil. Yes, the Indon Consulate in Penang had on 28 April 2014 written to the Penang Syariah chief judge Abdul Walid Abu Hassan for Halimah’s case to be reviewed and withdrawn as Halimah is a Catholic Christian, and therefore does not fall under syariah jurisdiction.

Guess what, those syariah wonders has returned Halimah's case to the Syariah Lower Court for a retrial because she's not a Muslim.

Hey holy men, don't you get it, Halimah is NOT a Muslim so what bloody retrial in a syariah court are you talking about?

Instead you wonders should not only erase that inappropriate and illegal conviction, but also apologize profusely to her for wrongful arrest and illegal-religious harassment, and also compensate her financially for her troubles, including court and legal fees, and even add in punitive fees for stressing her. And I recommend (wakakaka) these be deducted from the pay of those judges of the Penang Syariah Lower as well as Appeal Courts.

More importantly, this is the sort of ultra kiasu mentality of Malaysia's syariah courts where they just want to win whatsoever, and in covering up their fuckups, have called for a ritual-sandiwara retrial in order to pardon her or dismiss those charges which should not in the first place be even laid.

Ultra kiasu - what does our foremost Islamic Warrior RTA say?

It's so fucking clear they (the syariah courts) have made a humongous mistake of unmitigated proportions and still refused to say a simple 'SORRY, we fucked up real good'.

And as we know already, but now demonstrated so annoyingly and arrogantly by the syariah courts, there seems in the ordering of a retrial in a Syariah Court of a Christian already wrongfully prosecuted and persecuted in an earlier Syariah Court to be no logic, reason, nor fairness.

On 2nd thoughts, these deficiencies are quite common in religious matters (of all religions including and especially the Abrahamic religions).

This is what I had warned in a number of my posts about the implementation of syariah-hudud laws, that a Malaysia under Islamic syariah laws (inclusive of its hudud) as envisaged and intended by PAS (and some sections of UMNO) will in all likelihood not have an option for political belakang pusing for non-Muslims and even Muslims.

Democracy and its institutions will automatically come under the control of a supreme, non-democratic, non-questionable, non-challengeable (a la the fatwas of a former-late Kedah PAS MB), and totally dictatorial religious Majlis, FOREVER MORE, ...

... and as mentioned by RPK in his post Friday prayers are NOT compulsory, said the Mufti, the process in an Islamic environment is not democratic and not questionable even by logic, reason, precedent or rules.

Thus one cannot, in Manglish (Malaysian English), 'simply play play' with our voting in any election in believing we can still vote PAS out in a following election if we don't like its policies.

In all probability there may well be no following election once the religious Majlis has been established, for it will be all powerful, absolute in its command, control and governing of national politics and indeed everything, and frighteningly unchallengeable.

It is unlikely to put itself in a position of losing its power, as we will soon see in the Kassim Ahmad case. Thus it will likely be that all election candidates may have to be approved by the Majlis, so perhaps Najib and Anwar should both bear this in mind, wakakaka .

For the pythonic demon will by then have wrapped its sinister coils around all of us kau kau, where there will be no escape. 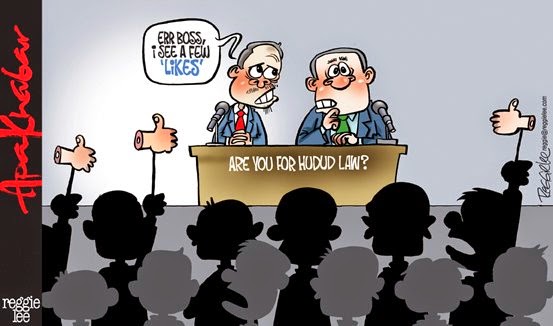 It's not the first incident of the Islamic authorities intruding arrogantly and aggressively into non-Muslims domains. See my posts PAS - from Progressive to Pythonic.

We have already been deeply concerned with PAS' version of Islamic rules which had been shown to directly affect non-Muslims, such as the KB gender segregation rules (unisex hair dressing salons; couple holding hands), PAS own interpreted moral values in taking action against 2 non-Muslim men in a car watching aeroplanes taking off at KB airport, and again PAS own interpreted Islamic values in its intrusive dress codes in Kedah for Chinese New Year concerts.

And recall the traumatised elderly American couple who were intrusively harassed by the religious police in Langkawi, who broke into their room suspecting they committed khalwat, so much so that the frightened wife took the first plane out of Malaysia, with this happening during Malaysia's Year of Tourism, wakakaka. The poor hubby had to stay back for his yacht to be repaired before he swiftly sailed away

And the Islamic religious authorities have recently shown its heavy discriminatory hand in its prosecution of frail 81-year old Kassim Ahmad but not that of Raja Bomoh and his embarrassing non-Islamic occult antics.

Well, I suppose they are deep shit scared of Kassim Ahmad because his views as Malaysia's foremost intellectual had threatened their positions/jobs, whereas Raja Bomoh for all his nonsense was good for a laugh or two.

Kassim had accused some ulama in Malaysia of imitating the 'priesthood caste' system. 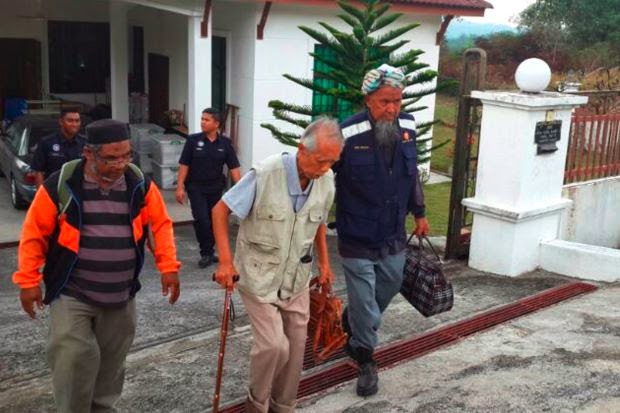 TMI reported Kassim's view on the ulama 'caste', where he said he used the term 'priesthood' because the ulama have become 'dictators' of the Muslim's understanding of his Islam. He stated: "This class of priests control the interpretation of religion to the masses. They are dictators. There is no freedom."

Indeed, and that's why they are scared of him. Naturally, the Terengganu Fatwa Committee have unanimously (wakakaka) ruled that Kassim's statements on the priesthood caste etc as kufur (disbelief) and apostate thoughts.

What do you expect, for those religious mullahs to say Kassim Ahmad is a jolly good fella? Wakakaka.

But what has worried me more has been their arrogant prosecutorial-persecutorial treatment of a non-Muslim, Halimah, a Catholic Christian woman, and their various (state) government-sanctioned intrusions into non-muslim activities in Kelantan, Kedah and one incident each in Ipoh and KL, and of course the already 9/11-traumatized American couple.

But sorry lah, I won't include in my concerns the prohibition on the Catholic Herald's wish to use the 'Allah' word, wakakaka.
Posted by KTemoc at 3:40 pm