Has Zuhdi Marzuki lost himself?

TMI - It was only a study, Zuhdi says of contentious WhatsApp texts 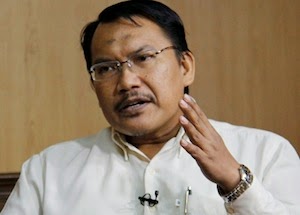 The PAS research centre operations director said the screenshot of his analysis on the WhatsApp group, which had gone viral, was based on the proposal of a senior PAS leader who had put forward a motion for PAS to leave the PR coalition.

"The discussion which was leaked was my response to members of the WhatsApp group who had asked me to present a 'scenario analysis' about the proposal by a PAS leader to leave PR.

"The motion to leave PR was strongly supported by not less than 10 members in the WhatsApp group, many of whom are close to (Datuk Seri) Anwar Ibrahim," he said in a statement, adding that he was not one of the 10 who had supported this motion.

I will come to his above words later, but for now, it's obvious that non-PAS Pakatan people are worried at the thought of PAS leaving Pakatan (as expressed by Lim GE two days ago), but they weren't angry because that's PAS' right to do so.

But what truly pissed them off had been Zudhi Marzuki's racist tainted proposal. Though I don't think highly of Rafizi Ramli after his stupendously stupid Kajang Move, I have to admit he summed up Zuhdi Marzuki's nasty bomb best with his statement (reported by TMI):

"What is the disciplinary action to be taken against Zuhdi, who had suggested a treacherous proposal, going against the agreement inked between PAS and Pakatan and the people who had voted for PAS and Pakatan?

"We want to know how many from the PAS central leadership hold such racist and anti-democratic views like Zuhdi."

If Zuhdi wished to propose a scenario for PAS leaving Pakatan and joining UMNO in a brand new coalition, that's his and PAS' democratic right, but did he have to say words like what was reported by TMI, as follows:

More distressingly, the tone of the conversation was blatantly racist, reported the portal, with Zuhdi saying that his scenario would return political dominance to the Malays and allow them to check "DAP and non-Muslims".

"After this, if DAP and non-Muslims make noise about the Allah issue or raids, we can just swat them away".

"At the end of this year just change the borders to return all the Malay-Muslim political power."

For a follower (and thus fearer) of Allah swt, he talked about gerrymandering, namely, the changing the electoral borders to return all the Malay-Muslim political power. Yes sirree, this so-called Allah-fearing man has proposed to gerrymander a la the EC, and with such racist overtones.

Frightening to imagine how many more like him are in PAS? What if PAS comes to power as a future federal government?

The EC under UMNO would be a kindergarten compared to their version. No, on second thoughts I will be proven wrong as under a PAS federal government there won't be any more EC to make comparison with, wakakaka.

Aiyoyo Ama, for such a so-called Allah-fearing Muslim, he could bring himself to propose such ugly tactics and used such racist words. Obviously he appears to be without understanding of the universality and noble principles of Islam where racism is in fact anti Islam.

For hundreds of years, so-called 'untouchable' Indians in the subcontinent found solace in Islam because by becoming Muslims, they were able to free themselves from a horrendously evil persecutorial bondage by another system which punished them (and still does) on the lottery of their births. That's what Islam stands for! Even an atheist like me knows that.

But wait, why should we be surprised by the bitter bad blood beliefs & behaviour of Zuhdi Marzuki?

Do you know who he is (or who he associates with) besides being a PAS central committee member?

Two months ago, I wrote that Zudhi Marzuki, the Chief Operating Officer of PAS Research Centre, was photographed together with ISMA leaders when ISMA made a bigoted statement to the press about Indians and Chinese being brought into Malaysia by the British to weaken the Malay identity and undermine the community’s birthright to peninsular Malaysia on the pretext of multiculturalism.

If we put his ISMA association within the current context of his racist proposal to his PAS central committee mates, we can understand why such a person would spew un-Islamic bigoted comments. It shows he is more of a Malay ultra than a Muslim scholar.

But even then, does a Malay have to have such racial feelings in their heart for others in order to be an ultra, an ethnic nationalist?

Thus it was not just a mere study or scenario-rizing as he had attempted to spin his racist words away. By his ISMA association and that NGO's record and trend of public statements against non-Muslims and non-Malays, it indicates that his words of 'swatting DAP and non-Muslims' have been based on his political proclivity and personal position.

I wonder why some supposedly learned Muslims in Malaysia seem to not understand the universality of the noble ideals of Islam when I, a non-Muslim and an atheist at that, do, admittedly in a very small way, but certainly much much more than them?