Sleeping with the enemy

A week ago I posted Political WTF 1 - Musa Hassan in which I raised some questions:

Is it be likely that Musa Hassan will re-occupy his old job as IGP PDRM if Anwar Ibrahim becomes PM?

I ask only because the ex IGP, one of the most despised and most accused person, has lately been rubbing pally-buddy shoulders with PKR-affiliated NGOs, and making virtually anti-Government statements and accusations, some of which, laughingly, had been attributed to his term as IGP.

Has there been a done deal between Musa Hassan and PKR?

Or, is the ex IGP just another Dr M, wanting to rewrite his place and performance in Malaysian history?

Then I followed that up with Political WTF 2 - Musa Hassan on 30 November after reading Free Malaysia Today's news article No plans yet to bring Musa Hasan into PKR. 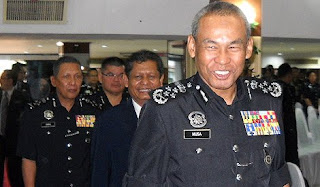 I had opined that statement by PKR secretary-general Saifuddin Nasution, plus the absence of any clear-cut repudiation by him that PKR is and will not be accepting/approving any membership application by Musa Hassan regardless of the former IGP rubbing shoulders with PKR-affiliated NGOs at their forums, has been the BIGGEST hint yet that PKR will likely be admitting Musa Hassan into the party as a member.

Saifuddin tap-danced around a yes or no confirmation by saying meaningless stuff like “Approval of applications is done on a monthly basis. When we have distinguished names of ‘big people’, of course we take note of it.”

Well, were you any clearer?

Then, when he was pressed by the media on whether Anwar Ibrahim would object to his past tormentor joining PKR, Saifuddin did the hula hula dance, stating that “When there are applications made by big names, the decision to approve them is made by the party leadership” and not by any individual (meaning Anwar Ibrahim).

I take that as Saifuddin virtually admitting Musa Hassan will become a member of PKR, and that when it happens, shouldn't be attributed to an individual known by his title of The Great Man, wakakaka. 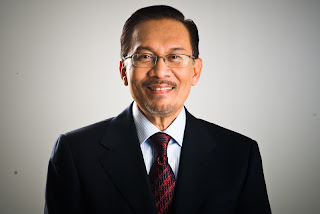 Okay, really it's none of non-PKR people's business but it sure as hell bring into focus the saying 'Politics makes strange bedfellows', which incidentally was adapted from Anwar Ibrahim's fave author, Bill Shakespeare (but of course, second to his top fave, al Quran).

Alas, the storm is come again! My best way is to creep under his gaberdine; there is no other shelter hereabout. Misery acquaints a man with strange bedfellows. I will here shroud till the dregs of the storm be past.

Trinculo was philosophizing that in order to avoid a storm, he ended up sharing his sleeping area with Caliban, a dark native of an island but seen as grotesque and savage, and described by the other characters in Shakespeare's play as a monster.

We learn that Caliban was treacherous, switching his allegiance from one side to another without any scruples.

And it was Robert Phang, former panel member of the MACC advisory panel, who voiced his belief that Musa Hassan's statement against Hishamuddin etc had been 'backed by PKR'.

Phang must have been shocked to see Musa Hassan flanked by PKR national policy and strategy bureau secretary S Gobikrishnan and Negeri Sembilan PKR youth exco member Sri Sanjeevan, when he (Musa) alleged that Hishammuddin had interfered with the police force under his IGP days.

Phang said: “If Musa is backed by PKR, then I must express my utmost disappointment that PKR appears to be a desperate party."

" ... going into bed with this cunning man and supporting his cause will mean that the leadership of PKR has no principles. I say to PKR - dissociate yourself from this wolf in sheep’s skin."

“Ask why is he now attacking the government as evil, whereas he once was its key perpetrator. If PKR keeps supporting this evil man, then PKR will lose the support of the public for stooping so low just to undermine the BN government.”

It sure as hell didn't help when Saifuddin Nasution tap-danced around the question of Musa Hassan's possible membership in PKR, as discussed above.

Now, we have Musa Hassan virtually suffering from political verbal diarrhoea everyday, when today he gave us the benefit of his policing wisdom in Malaysiakini's Musa: Rival parties' ceramah should not be side by side.

Malaysiakini reported that in an interview with Musa Hassan: ... earlier this year, Musa had reportedly told his younger brother Fuad Hassan off, to not interfere in police investigations when his brother asked him to help Anwar, as he warned that could be constituted as disrupting the investigations.

And RPK informed us that Anwar Ibrahim has a new Chinese backer, a sort of 'sugar-daddy', so to speak, wakakaka.

However, I am keeping clear of the alleged links between Anwar and Deepak Jaikisian because that allegation came from an UMNO blogger called papagomo who together with UMNO Gelugor’s Division Chairperson, Dr Novandri Hasan Basri, fabricated the irresponsible shameful lies about Lim Guan Eng’s son. Surely not a reliable source.

But really, what's the 'sweet' story on the public resurrection of Musa Hassan, complete with his political volte-faced orientation, right on the eve of GE-13?
Posted by KTemoc at 10:13 pm