The Catholic Herald and the 'Allah' word

Father Lawrence Andrew, the editor of the Herald, the Catholic newspaper punished with the ban, said the move was part of a series of restrictions put in place by the government when it renewed the paper's licence on Tuesday. 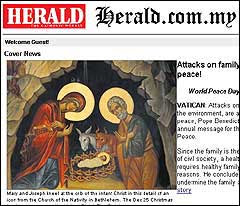 Aiyoh, as if he didn’t know why!

Dear Padre, I am not in the least surprised by the government’s decision.

If any of you have difficulty knowing why, well, Malaysiakini has kindly refreshed our memory on the sorry episode when it wrote: The Herald, circulated among the country's 850,000 Catholics, nearly lost its publishing licence last year for using the word "Allah" as a translation for "God", with authorities saying it should only be used by Muslims.

It’s not about the use of the Malay language (Bahasa Malaysia) per se that has led to the restriction. It’s the Catholic newspapers’ insistence on using the ‘Allah’ word in place of ‘God’.

There have been lots of arguments from Christians on why the word ‘Allah’ has to, must be used in their scripture. I loved and enjoyed learning about quite a few which were eruditely explained by sweeties … but alas, I am not convinced …

… no doubt much to chagrin and even anger of some of those sweeties.

No one can deny that both Islam and evangelistic Christianity are missionary religions, with an obligation on the faithful to convert the 'pagans' (like kaytee - wakakaka) into embracing the faith, to save them from eternal damnation … yadda yadda yadda …

But precisely because of that, these are examples of what Malaysian Islamic officials fear … Eight arrested in Jordan for Christian proselytizing and Crackdown on Christian Proselytizing.

OK, perhaps the above two links are blogs maintained by Christians who naturally disparaged the arrests.

Here’s a more balanced report by the Denver Posts on evangelistic proselytizing during the aftermath of 2004 Tsunami – Proselytizing during relief efforts divides Christian groups, which explained why, at one stage during the relief work in Aceh, a much pissed-off Indonesian VP, Bapak Jusuf Kalla wanted to chase the Christian relief organizations out.

I am personally acquainted with an evangelistic Christian pastor in Australia who confided in me (post tsunami) that he made a ‘mistake’ in releasing all the aid money collected in Australia for Sri Lankans affected by the tsunami.

He bemoaned that those Sri Lankans spent evey cent of that large sum on food and medicine. He confessed he had learnt from that and would only give only part of the next batch of donations for food whilst retaining the larger portion to build a new church for the poor Sri Lankans’ salvation.

I was and am sure the pastor had been totally sincere in his Christian intentions to help the Sri Lankans but underlying the purity of his charitable desire was his evangelistic (missionary) duties … that the souls to be saved would be far more important than the physical bodies.

I provide this example to illustrate the missionary obligation … and with it, the consequential fear and suspicions of Malaysian Muslims that the Catholic Herald may have a sinister agenda ('sinister' in the minds of those suspicious Muslims) to proselytize Malaysian Muslims, especially those from Sabah and Sarawak.

Being neither a Christian nor a Muslim, I see the easiest solution towards restoring the right of the Catholic Herald to have a Bahasa Malaysia section (and hopefully containing translations of my good matey Lucia Lai’s many articles) being the simple act of the Catholic Church agreeing to disuse the word ‘Allah’ and instead referring to the Almighty as ‘Tuhan’.

If we are talking about Bahasa Malaysia, then the word for 'God' is 'Tuhan', as kaytee had learnt in the Methodist Boys' School in Penang.

But if the Church (both Catholic and Protestant) insists on its right to use ‘Allah’, then it must await the Court’s decision on this issue, due next month.

Now, what if the Court rules in favour of the government …?

Will the Church continue to deny its bumiputera parish the facility of a good Christian newspaper in Bahasa Malaysia?