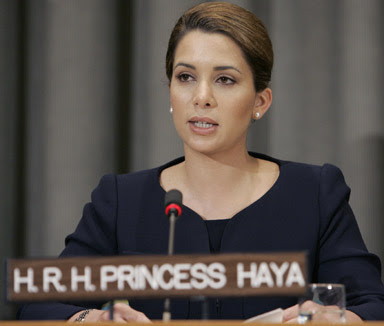 Jordan's Princess Haya, a UN messenger of peace, warned on Sunday that growing Arab anger and frustration over Israel's war in the Gaza Strip, could spiral out of control. […]

"We are supposed to send 15 trucks of aid to Gaza every day starting today," she said, adding that each truck carries 5,700 food packages.

"But I have just heard that the Israelis are reducing the capacity of each truck by 10 percent."

"Why would they need to take 500 food packages of each truck? One package can feed three people for a month."

She's being diplomatic - she should have said 'The Israeli military STEALS food from Palestinians'!!!

"I am frustrated like the people that nothing is being done. It's nearly impossible to operate and the world needs to stand up and say this," she said.

Jordan, which signed a peace treaty with Israel in 1994, is sending daily aid shipments to Gaza, where the 16-day-old war has so far killed around 880 Palestinians.