My matey Dean Johns has had his latest article published in Malaysiakini, naturally about the current Israeli assault on Gazaan Palestinians. But before I get on to his article, I read the news (also flashed on TV) that the Israeli mortared a UN school at the Jabaliya refugee camp school in northern Gaza, killing 48 Palestinians, many of whom were kids.

The Sydney Morning Herald (SMH) reported that UN Humanitarian Coordinator for the Palestinian territories Maxwell Gaylard, revealed Israel had earlier been given the GPS coordinates of all UN buildings in Gaza - including UN schools.

But that didn’t save the refugees taking shelter in those schools because the SMH reported also that Israeli artillery had shelled another UN school in the southern Gaza city of Khan Yunis, killing two. Meanwhile an IAF air struck a third UN school in Gaza City's Shati refugee camp, killing three.

With these three UN schools assaulted by the Israeli forces (despite their GPS coordinates being provided to those Israelis) Maxwell Gaylard sadly concluded "Neither homes nor UN shelters are safe for civilians”.

He demanded an investigation, stating: "If international humanitarian law has been contravened, those responsible must be held accountable."

Dean Johns, a most fair person, wrote in Malaysiakini: Though an enthusiastic supporter of Israel’s right not just to exist but to thrive and prosper in peace, I’m outraged by its assault on Gaza.

Just as it did in its all-out war on Hezbollah in South Lebanon back in 2006, it is murdering and maiming innocent people along with the terrorists it is targeting. And it is creating even more resentment and militancy, if possible, among its many mortal enemies around the Muslim world.

I can only expect this from Dean as he is a good and righteous bloke, like 100 plus Australian Jews who have condemned Israel's invasion of Gaza, describing the action as inhuman and abominable.

‘Abominable’ is a very very harsh word in the Jewish lexicon and it took the current vile, vicious violence of the Israeli military to evoke such a stern response against Israel from an impressive array of Aussie Jewish personalities.

* like that pompous W Scott Thompson (another Malaysakini columnist) who used the pretentious high faluting word ‘tutoyer’ to call Dennis C Blair by his first name, I too believe I can ‘tutoyer’ Dean wakakaka

I know Dean has been referring to some local Jew-haters (mind you, I’ve also been accused by an ardent pro Israeli sweetie of being one, though I had supported the Israelis right to live within their 1967 borders – I admit that lately, after witnessing their f* atrocities, I am gradually changing my mind even on the '67 borders), ...

... but in a universal sense I believe Dean could have better used a title like ‘More reasons to hate Jews’ (save of course for the ‘converted’ and anti-Muslim bashers) to describe the most likely consequences of the Israeli vicious and malicous slaughter of Gazaan Palestinians.

The Israeli oppression of Palestinians has always been an emotional issue for Malaysian Malays because of the Muslim connection. Though of course, except for those who understand the historical injustice of the West (initially Britain, then USA) perpetuated on the Palestinians, many Malays support Palestinian for no other reason than their Islamic affiliation.

In the same token many non-Malays don’t, with some of my blogging mateys even believing the Israeli propaganda – please read Chris McGreal's article at the Guardian news online titled Why Israel went to war in Gaza and the Middle East Online’s Israeli propaganda takes international beating.

The lamentable dichotomy of Malaysian emotions towards the long suffering Esau-like (or Uriah-like, take your pick) Palestinians is that old sad saying of ‘the enemy of my enemy …’, totally devoid of independent and balanced thinking, considerations of justice in a historical context, human rights and the irony of current Israeli vicious neo-Nazi oppressions.

It doesn't help when the religious-influenced Teflon coating accorded to the Israelis, either because of Western guilt over the Holocaust or the divine association of their Hebraic ancestry, provides an open cheque book immunity to Israeli military atrocities.

In our backyard, or rather, in the Malay heartland of Kuala Terengganu, the Israeli oppression, a foreign affairs issue (instead of what you would have imagined to be the more important local issue, the economy), has become the battle cry to convince voters which political party has the Malaysian Islamic hero, and which, the pro Israeli quisling.

In a Malaysian Insider earlier article titled As Gaza burns, politicians rush to champion Palestinian cause it said:

In recent weeks, Opposition Leader Datuk Seri Anwar Ibrahim has been the target of a campaign waged on the blogs and the Internet in general, accusing him of being in league with the United States and a party to the Annapolis Summit in 2007. […]

Anwar was allegedly a signatory to an open letter signed by scores of prominent Americans expressing support for the summit and calling for an inclusive approach to any peace initiative.

The current Israeli invasion of Gaza is testament to the failure of that conference and other initiatives, but Anwar is now being accused of backing the US.

Fortuitously for him, some days ago, sweetie Helen Ang had written a piece in Malaysiakini titled Malaysia is like Israel where she compared the racisms of Israel and Malaysia’s UMNO.

However, Helen being a fair sweetie also wrote: There is no exact parallel [regarding her comparison of Israel and UMNO] as we’re not in a war zone but Malaysia is somewhat like Israel in some ways.

So Anwar, feeling somewhat threatened by the bad mouthing of him as an American stooge, counter-attacked by declaring at a PR rally in Kuala Terengganu the Helen-ish UMNO is like Israel.

But the Malaysian Insider showed that unlike Helen Ang, Anwar … drew parallels last night between the conflict in Gaza and what he called the sufferings of Malaysians as he hit the campaign trail at a mammoth rally attended by thousands here.

Attempting to touch a sensitive chord among the mainly Muslim constituency here, he accused Umno, the main party in the ruling Barisan Nasional (BN) coalition, of acting like Israel.

That’s rather a low unconscionable blow of the most guttersnipe kind. Are we non-Malays being currently blasted by UMNO tanks, heli-gunships and fighter jets dropping illegal phosphorous bombs?

But then, Anwar has a propensity to go overboard when he panicked (being accused of America's man in the current climate), like he did last time when news of the sodomy allegations broke out, when he rushed off to ‘seek asylum’ at the Turkish Embassy for fear of being ‘assassinated’ - wakakaka.

… which, seeing that most non-Malays (Chinese and Indians) have hailed the man man lai ‘truth’ of Anwar’s lastest gospel of UMNO being racist like Israel, brings me to my closing paragraph:

(a) If UMNO is like Israel, and we non-Malays hate UMNO, then shouldn't we logically hate Israel too but sympathize with the oppressed non-Israelis (Palestinians) who are in a similar boat with us?

(c) If those non-Israelis (the Palestinians) deserve the Israeli oppressions against them, then perhaps we the non-Malays deserve to be racially oppressed too? 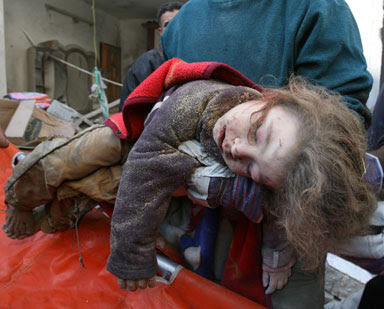 Think about it! At least you have the leisure to do so, whilst Palestinians in Gaza don't, because they are running helter skelter to f* nowhere … as they are all locked up in an Israeli high security Bantustan-like prison called Gaza!

(1) Gaza medics hit by Israeli attacks where Israel's Physicians for Human Rights group (PHR) said on Tuesday that medical teams rescuing the wounded in Gaza are being attacked by Israeli forces inside the territory.

PHR stated "Testimonies reveal that the IDF (Israeli military) is attacking medical teams that travel to rescue the wounded, including ambulances, doctors and medics in medical uniform."