What's in a name? That which we call a rose
By any other name would smell as sweet
- W Shakespeare - Romeo and Juliet (II, ii, 1-2)
In its article Malay NGO sues Penang over signboards, Malaysiakini tells us that Gabungan Graduan Melayu Muda (GGMM) or Young Malay Graduates Federation is a newly-formed Malay graduates non-government organisation (NGO).

Today GGMM’s launched its first action by filing a suit seeking a High Court injunction against both the state government and the Penang Island Municipal Council (MPPP) from erecting multi-lingual signboards for heritage-listed thoroughfares in old Georgetown.

In its suit GGMM claimed that the Penang State government in implementing the list of Penang heritage names on road signboards, has violated Article 152 of the federal constitution, which upholds the official status of Bahasa Malaysia. 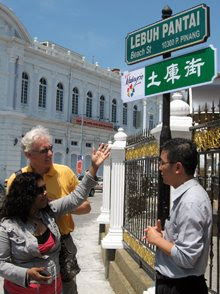 When I look at the above example of what has been done by Penang, I don’t see any evidence of our national language Bahasa Malaysia being replaced or even relegated to an inferior position by non-Malay road signs, so do wonder how GGMM could allege Article 152 has been violated.

It’s a shame that young graduates would indulge in such ethnocentric posturing rather than promote better relationship among the various ethnic groups.