“The beginning of wisdom is to call things by their right names.”
– Chinese proverb
”If you can't answer a man's arguments, all is not lost; you can still call him vile names.”
– Elbert Hubbard

About 2 and one-half weeks ago, I posted Racial signs against road signs? based on a Malaysiakini article titled Malay NGO sues Penang over signboards.

GGMM claimed that the Penang State government in implementing the list of Penang heritage names on road signboards, has violated Article 152 of the federal constitution, which upholds the official status of Bahasa Malaysia.

If the GGMM has been so concerned about Bahasa Malaysia, maybe it ought to remind the biggest Kahuna of all, UMNO, to discard its Mat Salleh name.

GGMM should insist that UMNO sets a good example, by changing its party name to Petubuhan Nasional Melayu Bersatu (or whatever)!

But kaytee is not asking UMNO to do so because I appreciate the acronym 'UMNO' has heritage significance.

So I hope GGMM and those other ethnic warriors will similarly appreciate the importance of preserving heritage names.

But if GGMM has buggerall to do, maybe they can ponder over this road sign that a mate send to me – wakakaka. 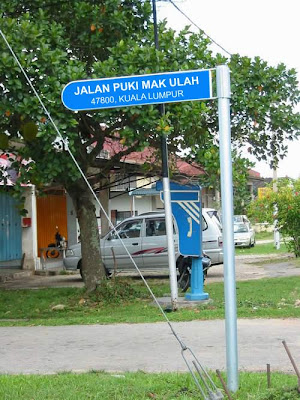