President George Washington established the Purple Heart Medal as a badge of military merit. Along with the badge went the citation:
"Let it be known that he who wears the military order of the purple heart has given of his blood in the defense of his homeland and shall forever be revered by his fellow countrymen."

The award fell into disuse until it was revived in the 1930’s before WWII, where it was awarded to soldiers who were wounded in combat. The Purple Heart carries the image of George Washington as a mark of respect for the US President who established the award.

Apparently 500,000 Purple Hearts were prepared in anticipation of the expected casualties in the planned invasion of Japan. But due to the Japanese capitulation after Hiroshima and Nagasaki were bombed, those were obviously not required.

Even allowing for all the Purple Hearts awarded in the horrendous wars of WWII, Korea and Vietnam and all those grotty wars that Americans got themselves into since WWII, more than a hundred thousand medals are still available.

It is the only US military medal that doesn't require a recommendation for a soldier to win it; that soldier merits it by virtue of his or her wounds in combat.

In Malaysian politics, particularly opposition politics, a pollie is not considered kau liao (cukup mampu) or blooded ‘in combat’ unless he or she has been arrested by our dear men in blue, and preferably assaulted, or better still, detained for a decent period under the ISA.

Probably the DAP contributed most to such bloodying and ISA detention, with virtually its entire top echelon having makan nasi kari kosong kerajaan (ate government’s curry rice ... ;-) with or without eggs).
Karpal Singh, Lim Kit Siang, Lim Guan Eng, Teresa Kok, and some of their erstwhile colleagues have all made the roll of 'honour'.

Now, Malaysiakini in DAP duo allege rough handling by police informs us that Tony Pua, DAP MP for Petaling Jaya Utara and Lau Weng San, ADUN for Kampung Tunku, have both joined the ‘exalted’ ranks of politicians who have been arrested and assaulted by the police.

Apart from having his shirt torn, Tony was kicked in his stomach and leg. Lau was punched in his face despite informing the policeman he was an ADUN. 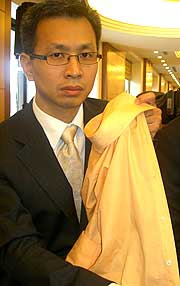 Our police have shown abysmal disrespect for our elected representatives. The IGP should explain the thuggish conduct of his officer, especially calling to account the responsible officer, the CPO Selangor. Assaulting a Member of Parliament or an ADUN, the rakyat's elected representative, should be made a serious criminal offence. 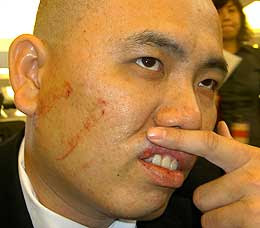 But let’s leave those hoodlums in blue as they don’t and can’t earn our respect, perhaps our fear, but never our respect. So I won’t waste too much time lambasting them.

But our Tony and Lau have been bloodied ‘in combat’. They deserve the equivalent of the Purple Heart …

… which set me thinking – hmmm, what shall we call such an award, and should we have an equivalent of a George Washington type of image engraved on the medal?

I wonder whether you would agree with me if I title it Pingat TC (PTC) and adopt the face of a well-known personality in Malaysian politics as the iconic image to be set in the medal.

To know what is TC, please look at photo below - wakakaka!

"Let it be known that he who wears the Malaysian Political Opposition order of the PTC has given of his/her blood in the defence of his/her constituency and shall forever be revered by his/her fellow countrymen."