Here' an interesting post by RPK which links the Forex adventure with the disaster, let me rephrase that, the financial disaster that is MAS - also see TMI's The 21 years of mismanagement that brought MAS to its knees. 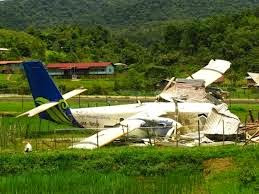 ... you are probably not aware of the reason why in the first place MAS was sold to Tajudin Ramli. According to the Affidavit filed in court (which anyone can get a copy of) Tajudin said he was ordered (he called it ‘national service’) to buy MAS at RM8.00 a share because the government needed to show a profit (on paper, that is).

And whom do you think ordered Tajudin to buy MAS?

In other words, the government needed to urut or massage the books. Since we lost RM30 billion playing the money market we needed to make money by selling MAS at an exorbitant price so that we can show a huge profit. So the profit from selling MAS can cover the loss playing the market.

I also note that Dr M has taken a pause in his virulent attacks, at times very ad hominem, against PM Najib. He just wants Najib out, full stop, and seemingly to hell with collateral damage for UMNO.

Oh, such imperious petulance by the emperor!

But has he currently run out of steam? Or is he taking a breather whilst his two henchmen do their 'jobs'? Wakakaka.

Or, in the current recount of MAS' financial buy-back footsie-tootsie with Tajudin Ramli, the resurrection of unaccountable Forex gambling, and now RPK's linking of the two financial naughtiness, he has realized his dua kali lima brazen bullying badgering against Ah Jib Gor?

OTOH, could he be leaving it to Pakatan's Rafizi Ramli and Tony Pua to carry on with the 1 MDB bone they now have in their mouths and to worry that to death and thus finish off Ah Jib Gor for him?

And now a quote from Manmanlai's fave author (of course next to al Quran):

Alas, the storm is come again!