Today I am at a loss as what to blog on. Everyone is talking about or has posted or heard tons/oozes of 1MDB stories that I don't believe I can add anything revealing on the issue, other than to quote someone. 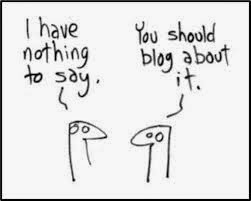 OK, so happened I was at RPK's website, reading about the RM58 billion loss (actually 30 billion in 1991-2 but RPK converted-updated that amount to today's value of 58 billion) by our adventurous Bank Negara and Finance Ministry in Forex trading. RPK quoted Lim Kit Siang saying on 10th January 2004 (as follows):

Nor Mohamed’s first job is to issue a White Paper to “exorcise the ghost” of the RM30 billion Bank Negara forex losses a decade ago to establish his suitability as the Second Finance Minister – apart from professionalism, a full commitment to accountability, transparency and good democratic governance.

In Parliament in 1994, I had given reasons as to why the Bank Negara’s forex losses as a result of its forex speculation operations could have amounted to as high as RM30 billion, which had not been seriously rebutted by any top government leader or Bank Negara official.

The reasons which I had advanced in Parliament in 1994 for a Royal Commission of Inquiry into the colossal Bank Negara forex losses remain valid today, and should be the terms of reference of the White Paper which Nor Mohamed should present publicly as his first Ministerial duty, viz:

1. To determine the actual extent of the colossal forex losses suffered by Bank Negara 1992-1994;

2. Whether there had been any financial malpractices and abuses in view of the inconsistencies and conflicting explanations about the colossal forex losses; and

3. Establish how Bank Negara could incur such colossal losses. 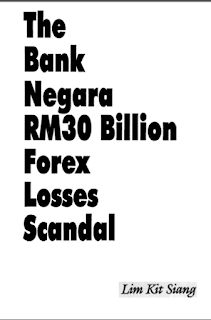 Previously, on 11 April 1994, Lim Kit Siang delivered the following in Parliament (extracts only):

Furthermore, Anwar Ibrahim had misled Parliament last July when I questioned him whether Bank Negara had suffered more forex losses. Anwar said that this was not true as he had been monitoring the Bank Negara’s forex dealings weekly.

On July 19, 1993, I asked Anwar Ibrahim a supplementary question during question timw as to whether at that date, Bank Negara’s provision of Rm2.7 billion contingent liability for forward forex trading in the 1992 Bank Negara accounts had not only been confirmed, but even more forex losses had been incurred.

In this one short answer, Anwar Ibrahim had misled Parliament and the nation on three matters:

*that by July 1993, the provision in the 1992 Bank Negara accounts for RM2.7 billion contingent liability for forward forex trading had not been confirmed;

*that Bank Negara had not suffered more forex losses; and

If Anwar Ibrahim claims that he had directed Bank Negara to stop forward forex trading 18 months ago, and that “there are no new trading arrangements” last year as the central bank unwound its forward positions in the market last year (Business Times April 6, 1994), then Bank Negara should not have incurred RM5.7 billion when its contingent liability provision for such forward forex trading in end- 1992 was RM2.7 billion.

Since then, RPK has another related post titled pointedly and poignantly as WHY 1MDB IS NOT OKAY AND THE FOREX LOSS OKAY?

Anyway, those are issues known to virtually every adult Malaysia so I wasn't all that deeply interested, though I am amazed (methinks 'flabbergasted' would be a better word) that Dr M saw fit to criticize Najib for 1MDB - mind, it's not that his criticisms of Ah Jib Gor was out of order, au contraire, but I wonder how he and his Forex adventure would compare with 1MDB.

But far more interestingly, I came across a comment by one of RPK's regulars, a commentator by the name of Mat Topeng, who leave the following non-sequitur comment [verbatim]: 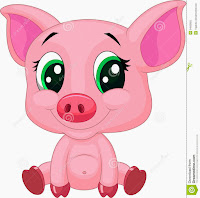 Actually Mat Topeng has been observant because Chinese like pork and pigs. Before I go on to explain, have you by the by read my piggy posts as follows?

Chinese not only love pigs and pork but also name some of their children as 'ah too' (piggy), 'aw too' (black pig), 'too boe' (female pig or sow - this being a nick for a man, wakakaka), 'too knia' (pigling) and Chinese grannies and aunties would croon to babies as 'babi knia', an affectionate baba-nyonya term implying the babes were as cuddly as young piglets.

The village (pork) butcher would be addressed respectfully as 'Too Bah Chek' ('Uncle Pork' and his wife as 'Too Bah Ee'. 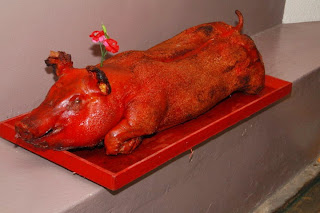 Chinese celebrated festivals, folk religious ceremonies and solemn events such as funerals, weddings and birthdays with trays of roast pigs.

Years ago my village doctor, with his B.Sc (Hon), MBBS from Dublin, would order a roast suckling pig as votive offering on the most important and sacred day of the year for Hokkiens, namely, the 9th Day of the 1st Moon of the Chinese lunar-solar calendar, this being the birthday of Thnee Kong (Lord of Heaven), the Numero Uno of the Chinese folk religion pantheon.

The votive offerings would be made every year commencing on the eve of Thnee Kong's birthday, to wit, the 8th Night of the 1st Moon. For more, see Hokkien salvation in sugar cane fields.

Yes, southern Chinese certainly have an affinity with pork, pigs and bah-kut-teh, hence I replied Mat Topeng's comment [to satisfy his 'just curious for answers'] with:

Mat Topeng I don't know how true this is but I have read some scientists claiming that eating babi improves thinking and thus intelligence.

One example they referred to is that ever since the non-orthodox Jews of recent times (last 100 years plus or minus) partake of pork they have not only become more intelligent (like Einstein), but have form their own new nation Israel, resurrect a dead language Hebrew for their everyday use (the only dead language ever resurrected) etc, where "etc" includes controlling the most powerful nation in the world (but not as powerful as the Jews, where more than a few have taken pork).

Another pork-loving race are the Germans - are they smart or what? They're the most powerful and probably richest West Europeans - even Russia fears Germany. And of course the Austrians, Danes and Poms love pork as well.

Then there are the southern Chinese (northern Chinese prefer beef and mutton), same as Taiwanese, Chinese Malaysians and Sings, they thrive on pork.

On a religious note for Christians, since Noah allowed two pigs to board his Ark, there must be a divinely ordained role for these sweet-tasting creatures, and the non-orthodox Jews, Germanic race (Germans, Austrians, Poms, Danes, etc), Chinese have taken up on what they perceive/believe to be God's culinary plan. 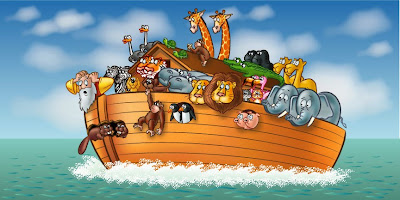