On this blue Monday (malas nak kerja lah what with the approaching long Xmas-New Year holidays, wakakaka, the mood is not quite there) I reproduce below what I wrote four years ago for the Centre for Policy Initiatives, then with the encouragement and support of a dear dear but sob erstwhile matey.

Even my other dear friend HY wakakaka left a comment there.

I had then left a friendly message for the DAP which is still very relevant today, especially today, wakakaka:

[note that my phrase below of 'God proposes, man disposes' is a role reversal of the original idiom 'Man proposes, God disposes', indicating the dangerous powers of some clerics ... indeed, of all religions ... where those 'Men' could claim to speak with the voice of, and mandate from, God]

A modern Asian myth has it that Lee Kuan Yew is the only man to ever ride a communist tiger without being eaten by the 'beast'.
In the mid-50s he teamed up with the incorruptible, dedicated and charismatic Lim Chin Siong (left), a left wing trade unionist, to form the People's Action Party (PAP). But Chin Siong was wrongly accused of being a communist, where some suspect he was set up by then anti-communist Lim Yew Hock, British Singapore's Chief Minister, and the British authorities.
Even Kuan Yew acknowledged Chin Siong was a selfless man with a Spartan lifestyle, and a mesmerizing orator who was totally dedicated to his cause, and in fact the man who set the gold standard for Singapore's renowned integrity in public governance. But it was said too that Kuan Yew so feared Chin Siong's immense popularity with Singaporeans that he got rid of him when the latter formed the Barisan Socialis, detaining him under the ISA as a 'communist'.
Though declassified British documents prove that Chin Siong was never a communist, Singaporeans continue to believe that he was one, as a result of years of the authorities' black propaganda against him. Thus the myth of Lee Kuan Yew surviving the ride on the communist tiger remains.
As the Italian say, Se non è vero, è ben trovato meaning "Even if it's not true, it's a good story."
In Malaysia today, we fear another such attempt in the making -- that of Lim Guan Eng riding the Islamic tiger. We do know not yet whether he will survive though my guess is, alas, he won't, for the reason majority-Muslim Malaysia today isn't the same as majority-Chinese Singapore in the 1950s.
Wooing the Malay electorate
Since March 2008, some DAP leaders have been courting Malay voters in order to dispel the Barisan Nasional stigmatization of the DAP as a Chinese-based political party. Obviously this is necessary as more than 60% of Malaysian voters are Malays, and the DAP realizes that it can never aspire to be a significant political force without their support.

Ironically, like Lim Chin Siong, Lim Guan Eng is an incorruptible dedicated leader who too lives a personal austere Spartan lifestyle, and has shown his care for the poor and elders of Penang. These and his going to jail some years ago in seeking justice for an underage Malay girl are already redoubtable models to showcase the DAP as a worthy multi-racial party to the Malay voters.
Yet DAP has gone one step further, choosing to project itself as a pro-Islamic organization.
Guan Eng has often referred to the Caliphate of Umar Ibn Abdul Aziz as his model for a scrupulously clean and thrifty government which cares for the ordinary people, while another DAP leader Nga Kor Ming is known for spouting quotations from the Quran.
Apart from the obvious need to expand its Malay-Muslim base, there have been other compelling reasons for DAP to expedite its wooing of the Malays via the Islamic avenue. The party has been concerned about the future of Anwar Ibrahim as well as the politics of PKR.
Anwar has served a vital role as the bridge and glue for the new coalition, Pakatan Rakyat which has PAS and DAP with antipodal ideologies. If Anwar is forcefully removed from the Malaysian political landscape, it is unlikely that PKR will be able to provide a substitute of equal stature and charisma. Thus DAP has decided on the worst case scenario where it will be required to work directly with PAS. What better time than to start now, and perhaps sneak a ride on the Islamic tiger.
But PAS, unlike the Singapore trade unionists, is no ordinary tiger. It is endowed with divine Teflon stripes. In a religious state, when power hungry men can overturn the tables into 'God proposes, man disposes', the potential for gross injustice cannot be understated or overestimated.
Take for example what PAS President Abdul Hadi Awang said in a press conference on Nov 12, 2003, after the launching of the blueprint on the introduction of Islamic laws in Malaysia. When asked what would happen to the existing [BN] policies which give focus to bumiputeras such as quotas under PAS's claimed meritocracy in an Islamic state, Hadi answered:
"The reality today is that the majority of the poor are bumiputeras. Hence, for the initial period, focus will be on the bumiputera. There may be a situation in the future that the bumiputeras will overcome their problems, and the Indians become the majority of the poor. Then, it will be the responsibility of the country to look after the Indian community. It will depend on the situation. [...] We are not disposing or dispensing with the term bumiputera."
Not unlike Umno, PAS' Islam would be an Islam with a strong Malay flavour. Under the Islamist party, even the already proven-to-be-marginalized Indians have to wait until the Malays have been 'rescued'.
The matter of hudud 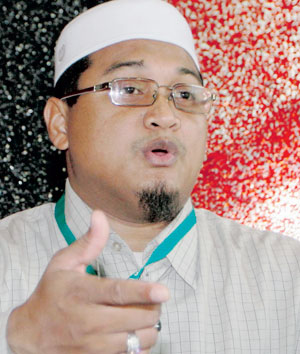 Then there's PAS Youth chief, Nasrudin Hassan (left), who was looking for an excuse to insert hudud into Malaysia's justice system. He saw the horrendous murder of businesswoman Sosilawati Lawiya and three others as an opportunity to propose that hudud replaces the current system. How hudud would have prevented the murders when the current justice system hasn't was not explained.
Mind you, this is the same PAS leader who blamed Valentine's Day and New Year's eve celebrations for the social ill of baby dumping. Of course he didn't explain why Valentine's Day is celebrated all over the world without incurring Feb 14 pregnancies (and our kind of baby dumping) in those countries.
We've also read of how in Saudi Arabia, three supposedly learned Islamic judges victimize the minorities, i.e. a Shiite, or one of the female gender (rape victim). The usual apologists in Malaysia offer the predictable excuses that the Saudi clerics' outrageous injustice was not influenced by Islamic jurisprudence but rather Arab tribal custom -- despite the obvious fact that the verdict had been delivered by Muslim judges in an Islamic nation that is the birthplace of the Prophet Muhammad.
'Tribal custom' was the same pathetic excuse offered when Pakistan, a nation which subscribes fully to Islamic laws, saw the horror of the oxymoronic 'honour rape' perpetrated against Mukhtaran Bibi.
Even the already ridiculous claims of tribal revenge against the woman and her teenage brother were subsequently discovered to be the sheer fabrications of lustful men. But the criminals were not apprehended while their victim was harassed and ostracized.
Where was the syariah and hudud laws in all of this? It had to be secular international pressure which forced the Pakistani president to order the arrest of the criminals.
But syariah laws or not, those 'honour rapes' continue in Pakistan even after that shameful case. Three years after the victimization of Mukhtaran, another sensational case occurred where seven men kidnapped and gang-raped a woman over two days in retaliation for some perceived wrong.
Were these the examples that the PAS Youth Leader wants us to believe his hudud laws can prevent?
But what worries me most was when PAS spiritual leader Nik Aziz Nik Mat recently claimed only DAP chairman Karpal Singh in his party was against the implementation of hudud laws, whose implementation, in their mind, would solve all of the world's problems, the Pakistani and Saudi shameful examples notwithstanding.
In asserting the DAP (all of party cadres and leaders) only minus Karpal is for hudud, Nik Aziz might have harboured high expectations from Guan Eng and Kor Ming's frequent references to Islamic governance and the Quran.
Let me advice those DAP leaders who want to ride the Islamic tiger that you are unlikely to succeed!
Its consequence would not only be the riders becoming meals for a big cat but in a reiteration of my earlier remark, in a religious state, when power hungry men can overturn the tables into 'God proposes, man disposes', the potential for gross injustice cannot be understated or overestimated.

Our only protection is the current constitution and the secular civil courts, warts and all.
Posted by KTemoc at 7:16 am