For too long now, some state religious authorities in Malaysia have issued fatwas (opinions) and treated them as immutable regulations that can be imposed at will and without recourse.

Today, the Court of Appeal affirmed that these state religious authorities have no such power when it upheld a lower court's ruling that the Federal Territory Islamic Religious Department (Jawi) was wrong in raiding and seizing copies of a controversial book from a Borders bookstore in Kuala Lumpur.

The book, "Allah, Liberty and Love" by Irshad Manji, was seized before a fatwa banning it was issued and, as such, Jawi's actions were deemed illegal and unconstitutional.

A three-man bench led by Datuk Mah Weng Kwai held that Jawi's action against the Borders store manager, Nik Raina Nik Abdul Aziz, was unconstitutional and illegal and said her arrest and prosecution must be quashed.

"Jawi had acted beyond their powers against Nik Rainah (third respondent) and the bookstore," Mah said.

The civil Appeals Court has done a damn good job in taking these religious authorities down a peg or two - high time too when some of their officers have become far too arrogant and too aggressive, believing their actions have been supreme, beyond reproach and beyond accountability.

I also have serious concerns about the quality (or lack of) of the officers those religious authorities recruited as their law enforcers. Recall the Zouk club shame in 2005 which prompted the BBC to report:

... allegations have surfaced about misconduct by Malaysia's religious police during a raid on a top Kuala Lumpur nightclub last month.

A number of women said religious officers ordered them to pose in their nightclub outfits while others were asked lewd questions about their genitalia. [...]

Others, including SI Azhar, were angered by the officers' alleged behaviour.

Then in 2006, we read in NST about the lustful leery lascivious behaviour of a Jais officer who caught an unfortunate woman for khalwat.

The poor sweetie had gone to Jais office in Gombak the day after her embarrassing encounter with Jais, in a vain hope to 'settle' the case amicably. However, she claimed she got more than she bargained for.

She was molested and forced to perform oral sex on said Jais officer as an inducement to let her off the hook. She also alleged the officer used criminal force to outrage her modesty by caressing her breasts and kissing her on the lips.

And it's not just religious authorities like Jawi, Jais, Jakim, etc that's limited by law. Even the syariah courts are.

Syariah courts have jurisdiction over issues such as Muslim family laws and issues related to Islamic observances, for example, fasting where they can fine Muslims eating especially in public during the fasting hours of Ramadan, the fasting month.

Then there's their most favourite, khalwat (as per above case and this and this) and Muslims caught yamseng-ing.

In Kelantan or Kota Baru I heard the Islamic authorities have taken the laws a step further, like making Muslim women wear tudung at risk of being fined if they fail to.

But the bottom line is the maximum penalty syariah courts can dish out is limited and not to the extent of civil courts which could even hand down life imprisonment and capital punishments.

Syariah courts may only pass sentences of not more than three years imprisonment, a fine of up to RM5,000, and/or up to six strokes of the cane.

The most recent disgraceful example of this was the IGP ignoring a civil court's order in a child custody case, preferring instead to obey the syariah courts.

While it's understandable Muslims respect the syariah court, the IGP as the chief law enforcer of our nation (and not a layperson) should know which court's directive takes precedence. 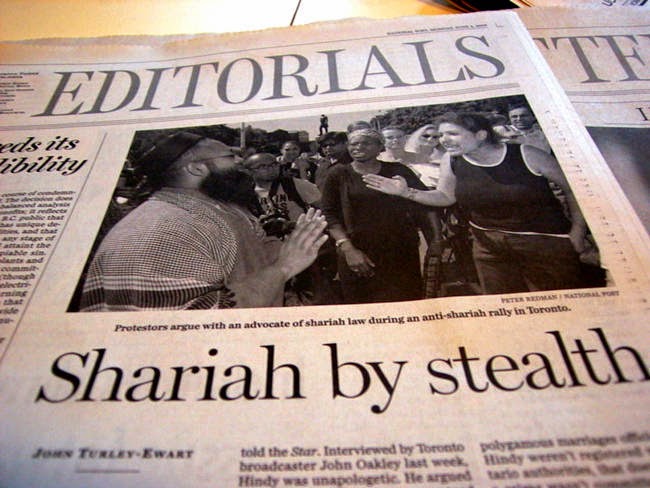 I believe part of our societal problems today have been due to the ambiguity over legal jurisdiction caused by far too much politico-religious meddling.

Time the civil courts claw back their rightful superior jurisdiction and power.
Posted by KTemoc at 7:56 pm