Two months ago, a malaysiakini report asked whether Tian Chua was bold or reckless. Bloke had been water-cannoned, shoved, elbowed, dragged, bashed, arrested etc by the police, but he hasn’t given up his way ….. you decide whether he's bold or reckless, or just plain dedicated.

The malaysiakini article said Tian had lost count of the number of times he had been arrested, under various alleged crimes or acts, such as under the Internal Security Act (ISA) for two years for allegedly attempting to overthrow the government (Tian over throwing the government? hahaha) through militant means (hmmm), and even for an alleged attempted murder charge (that incident of driving thro' the blocked road at a kampong about to be demolished by authorities).

But one of my friends was less kind, saying Tian Chua was a hopeless bloke who might even be a closeted masochist, always putting himself into harm’s way with the police. 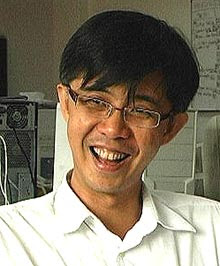 Anyway, changing landscape for a wee moment, there’s some (internal) concerns over the outcome of the recently concluded PKR Congress when even a member of its Malay Youth section leapt up to complain that the party polls have resulted in a dearth of Chinese members in its top echelon.

Back to Tian - I suppose Tian still holds the publicity chief’s position, being the ‘most qualified and inclined’ person for the highly visible post, though of course he couldn’t be counted as an elected member to the supreme council. I heard he once held a VP position as well. What happened to him to be so demoted to a mere PR chief? Too much external activist campaigning and insufficient internal party politicking?

But his boldness (hmmm, 'bravery' if you are kind) or recklessness could be detected by his statement regarding Anwar’s withdrawal from competing for the presidential post because of ROS dire warning for the party regarding Anwar's non-qualification. Tian told malaysiakini:

“My argument is the election on the top post should be allowed to go on, those who want to take the risk can vote for Anwar, those who are not can go for Wan Azizah and for those who think Anwar shouldn’t even started all this havoc can go for Rahman.”

He was reported to be strongly against Anwar’s withdrawal, openly criticising the latter for going against the delegates’ wish in the meeting - I heard there were some mutterings among some members a la 1998. In fact Tian was seen to be highly emotional outside the hall after Anwar announced the decision.

A passionate person, Tian is usually emotional, if not anything.

malaysiakini reported him repeatedly saying “what is the meaning of the congress?” when he was then calmed down by a few other leaders like Dr Xavier Jeyakumar.

I wonder, apart from his passion, what makes him tick like so?

I heard (hearsay only, mind you) that Tian once told someone, who queried him about the legality of something that PKR was about to infringe, words to the effect, ‘since when has PKR obeyed the law?’

If that reported attitude was true, then we have caught a glimpse of this man, who has a reputation as a kamikaze (karm see tui) type of political activist.

He had obviously wanted to defy ROS, even to the extent of having PKR dissolved for contravening the law.

Could it be that Tian is a man who relishes confrontation with authorities? Maybe such confrontations provide him with a high?

I wonder whether he was so incensed by Anwar’s withdrawal as to shout “Hey, DSAI, you’ve no balls lah!”, and frankly, I wouldn’t be at all surprised if he did.

That he is passionate, there is no shred of doubt. That he is committed to PKR and Anwar Ibrahim is for sure. But as I warned in an earlier post:

I have no doubt that he is sincere in a martyr-ish way. Actually I fear for Tian Chua that one day when he wakes up from his bruises and aches, he realises that all along he has been used by unscrupulous people. That realization, that it had been all for nothing, will be the biggest blow to this wannabe Saint activist or wanton S&M acolyte.