One of the abbreviations for Penang is PG. It would not be entirely inappropriate if we claim it probably stands for pork barrelling and gerrymandering.

We know what’s pork barrelling – we’ve seen that happened in Machap and Ijok recently where in the immortal words of one rather shameless minister, '10 years of development were compressed into one single month’s work'. Well, we aren’t Malaysia Boleh for nothing.

But gerrymandering, while familiar to us, may be worthwhile revisiting briefly.

The aim of gerrymandering is to advantage or disadvantage particular constituents, and we know who and what, don’t we. As an example of the two common techniques of gerrymandering, we could see 'packing' of opposition voters like sardines into unwinnable seats, and 'cracking' potential opposition voters (like Indians) over a number of seats where they would only be only useful under MIC guidance

A typical target could be members of a racial or linguistic group. The most vulnerable voting system is the single winner voting system such as our British-inherited ‘first past the post’ system.

A variation to the ‘first past the post’ would be one like in, say Australia, where the candidates may well have to depend on preferential votes, if they fail to get at least 50% overall. If we had that, then PPP's Kayveas would probably not have won in Taiping in the last election.

The term ‘gerrymandering’ came from the state of Massachusetts in the USA and was named after its governor in the beginning of the 19th Century, Eldridge Gerry. The other component of the word was ‘salamander’, a lizard-like newt, which shape looked like the constituency delineated in ridiculous fashion to favour the ruling party – so hey presto, the ‘gerry’ with ‘mander’ gives us ‘gerrymander’

Well, we must be acolytes of those Americans because we learnt from an article in malaysiakini that the DAP is complaining about our Election Commission (EC).

The complaint has to do with the alleged EC's ‘manipulation’ of the electoral boundaries in Penang to increase Malay-winning state seats to enhance UMNO's chances of taking over the state.

Hmmm, I thought UMNO is already in control of Penang with a front man (guess who’s the keris waving bloke?).

Law claimed that the ‘salamander-ing’ strategy is similar to UMNO tactics conducted in Sabah in recent years and Malacca about three decades ago. The two states are now in the firm claws of UMNO.

He concluded: "Leadership changes, but not its dirty politics". Amin to that.

Law lamented that Penang is the only state left in Malaysia without a Malay-Muslim chief minister, yet now has to suffer this nonsense. That is quite debatable [considering UMNO is already de facto in charge in Penang] if you know what I mean. Have you guys heard of the Japanese puppet state of Manchukuo? No? Here’s a picture of its emperor to help you understand what I am talking about – and if there is any resemblance to someone we know ;-) hey, it’s purely a coincidence. 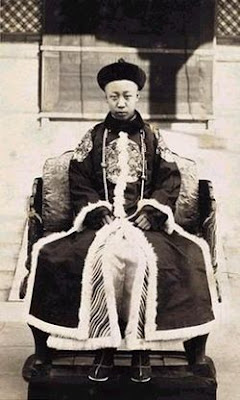 Emperor of Manchukuo - from Wikipedia

Law alerts us to the composition of the present state seats, namely the voter ratio between the Malay-dominated constituencies and non-Malay poll boundaries. The expected outcome is obvious.

According to him, we should expect changes in favour of UMNO even with the Chinese making up more than 70% of Penang’s estimated population of 1.3 million. He pointed out that only 22 state seats or 55 percent are Chinese-majority constituencies. But the Malays (meaning UMNO), who constitute less than 25% of the population, dominate 15 state constituencies or 40 percent of the state seats.

Another observer (a veteran MIC aneh) said that EC had not only controlled the increase in Chinese-majority seats but also precluded the formation of any Indian-majority state seats when it re-drew the electoral boundaries.

He lambasted the EC for failing to uphold democratic principles, which would have created at least three Indian-dominated state seats, given the population of Indians in Bukit Tambun, Prai, Bagan Dalam and neighbouring constituencies of Bagan Jermal, Sungai Puyu and Bukit Tengah.

If we were to compare Paya Terubong (23,490) to UMNO-controlled Teluk Bahang (10,791), the ratio of state representation is 2 to 1 in favour of those who vote for UMNO.