In 1857, a historical event known to the Indians as the 1st Indian War of Independence occurred. The British colonial powers called it the Sepoy Mutiny, implying they (the Brits) were the de jure authority of India. 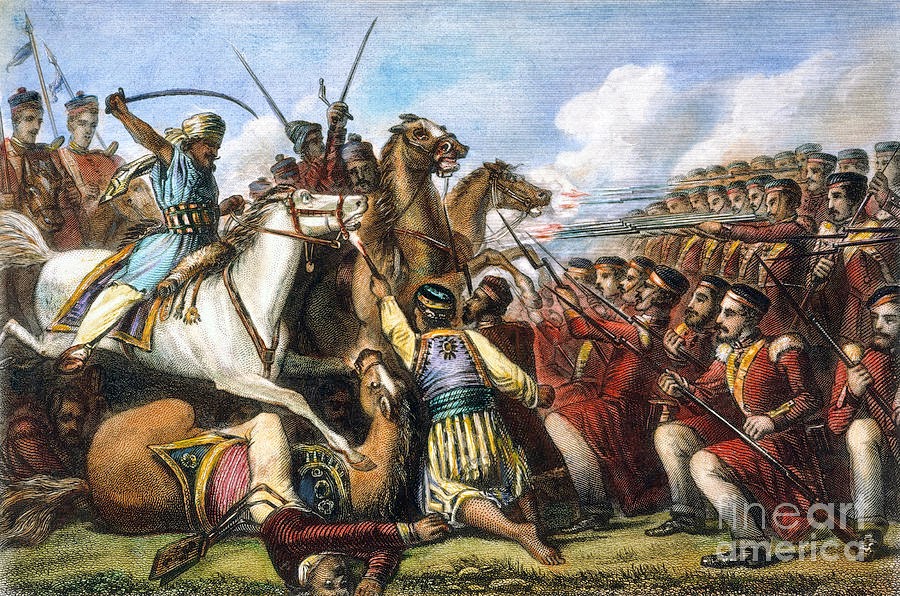 Coincidentally it occurred in the month of May – I’ll come to this soon.

The Indians were discontented with British rule. The sepoys (soldiers) employed in the British military heard rumours that the cartridges for their new Enfield rifles were greased with pork and beef fat, which were haram (not kosher) to Muslims and Hindus respectively.

To load an Enfield rifle, the soldier had to bite the bullet off the cartridge before placing the gunpowder in the weapon.

The sepoys were right royally outraged at the prospect of biting into haram stuff, and thus mutinied.

They were cruelly executed by being strapped to cannons which were then fired.

The Star Online reported that “Trouble is brewing in Parti Keadilan Rakyat (PKR) again after Kepong division chairman Datuk K.S. Nallakaruppan withdrew from the contest for the vice-president’s post yesterday.”

Incidentally Nallakaruppan, a personal buddy of Anwar Ibrahim, has received the second highest number of nominations for the vice-president’s post. Why would he want to pull out then?

Well, PKR youth vice-chief S. Manikavasagam gave us the low down. He claimed that Indians in the party had been ‘played out’, or in more common social language, 'marginalised' for a second time within a month by the leadership, and that more leaders were expected to withdraw in protest against the decision (or pressure) to sideline Nallakaruppan.

He cried out in anger: “We were denied a chance to field a candidate in the Ijok by-election and now, Nallakaruppan who is a leading contender, has been asked to withdraw from contesting the vice-president’s contest.”

Is this to be PKR's Sepoy Mutiny, where its Indian members rebel against being made to bite into something terrible (haram), like PKR’s leftovers (eg. good only as pet poodle food)?

The feeling among some PKR Indians is that they seems to be only useful as background party workers for the favoured ones, like Khalid Ibrahim.

Unfortunately it has been an inescapable fact that PKR Indians had been repetitively marginalised by PKR in some recent by-elections, very much to their chagrin because the BN had by contrast fielded Indian candidates.

Noted social activist Chandra Muzzafar, Dr Chandra Bose and malaysiakini editor Premesh Chandra have all commented, in one way or another, on PKR's 'cakap ta'serupa bikin' conduct (not walking its talk) in stark contrast to its claimed multi-ethnic credentials.

In the campaign leading up to the Ijok by-election, senior PKR Indian leaders had bravely attempted to spin away accusation of marginalisation of Indian members by hair-splitting sweet-nothing about the difference between BN ‘power sharing’ and PKR ‘multi-ethnic’ approach.

To the Indian members, they were all elusory, and the so-called superiority of PKR's approach was evidently not apparent to them, in fact far from it. At the end of the day, they asked: What’s the point of a so-called multi-ethnic approach when only one ethnic group gets the goodies.

It said that several Indian PKR leaders have denied The Star Online news report, and averred that Nallakarupan’s withdrawal from the vice-president race has no bearing on them whatsoever.

Manikavasagam who was reported by the mainstream media as condemning PKR for marginalising Indian members, hastily organised a press conference to repudiate the report of brewing mutinous tension among Indian members in PKR.

An observer, whom KTemoc persuaded to provide his take on what’s going on in PKR, suggested that the party is now in damage control and has probably leaned on the (friendship of?) senior Indian members to pull the Indian members together.

Some horse trading could also be in the making, which would then see the not-unusual back-pedalling. He advised me to look at the first report as the truer version - well, at least true 'originally'.

Hmmm. But effectively, at least for the time being, the Sepoy Mutiny has been suppressed. Oh, by the way, malaysiakini also reported that Manikavasagam has reaffirmed he would be moving up a notch by contesting for a supreme council seat.

And isn't it wonderful that Sarawanan has also denied the news report and similarly reaffirmed he would accept the nominations for the Youth exco post.

Again, congratulations are in order.

Now, malaysiakini stated that the contenders for the 3(?) VP positions are/were:

With Nallakaruppan’s unexplained withdrawal (I’m sure a ‘perfectly’ good explanation will be issued shortly, wakakaka), incumbent Azmin Ali, who is in last position on numbers of nominations, is now automatically in. I am of course assuming that there are only 3 VP slots.

Another incumbent R Sivarasa has also, most strangely, withdrawn (earlier). Good lord, does this mean there won't be any Indian among the VPs?

Oops, I have forgotten that PKR does not practise power sharing because it's a multi-ethnic party. Sorry.

I also recall that Dr Syed Husin, who had wanted to retire, was persuaded to stay on as Deputy President. Initially I had thought that PKR wanted to retain his prestige and appeal (to blokes like KTemoc) at a time when the general election is just around the corner.

Could it be he has been asked to occupy the seat, keeping it warm for a favoured person?