The political choice in GE-13 for many non UMNO & non PAS voters has become a dilemma, a very serious one, though some (but not all) are prepared to go for broke and take a chance.

Unusually, it’s not UMNO or any of its media mouthpieces which has thrown the apple (or thorny durian) of discord into the political arena. It was Harun Taib, PAS’ Ulama Cheif, who did so when he declared that our legal system will have Hudud if PAS wins more seats than allies.

While that declaration by itself, that of embracing hudud, is not new, and a known aspiration of PAS, what has been far more worrying was Harun Taib’s assertion that PAS will implement hudud regardless, as evident in his reported words “… if not with the current partners we have in Pakatan… may be there will be other pacts that will lend us their support …”.

If that doesn’t smack of arrogant go-it-alone-after-winning treachery, what is it then? What kind of coalition partner is PAS?

PAS has previously admitted that in more than 60 federal constituencies, the non-Muslim votes could be the crucial factor in securing wins over its principal political opponent UMNO. It currently relies upon its Pakatan allies to help it gain non-Muslim support, especially Chinese votes, to ensure an edge over UMNO in those seats. PAS has already enjoyed considerable samplings of this Pakatan cooperative approach, both during GE-12 and in some subsequent by-elections.

PAS' election benefits have been sterling examples of cooperative support of multi-party alliance where, for example, DAP would convince non-Muslims to vote PAS in preference to UMNO while PAS in reciprocation would campaign for DAP in Muslim areas. But an alliance, apart from involving quid pro quo arrangements as above, also has mutual understandings or agreements, essentially on a raft of high level policies, where one non-negotiable of DAP would be NOT to change Malaysia’s current (civil laws) legal system into a theocratic judicial (syariah) system.

But perhaps precisely because of PAS' election benefits from support of non-Muslim voters, buttressed by encouraging signs from the recent massive multi-ethnic support for Bersih 3.0, it has allowed itself to suffer from an excessive exuberant eidolon that by itself it enjoys broad appeal and popularity, and allowed the erroneous euphoric expectations of virtual victory to run riotously rampant in its head, and in so doing, has not only ignored its DAP ally's aversion to changing the nation's legal system, but arrogantly told it to stuff it.

PAS now believes it can go it alone, and to f* with its current allies (specifically DAP) if they won’t come to the hudud party (excuse the unintended pun).

Let’s re-examine what Harun Taib meant by his arrogant words of “… if not with the current partners we have in Pakatan… may be there will be other pacts that will lend us their support …”.

Pray tell me, what 'other pacts' will possibly lend PAS their support in the event of a Pakatan victory in GE-13 but with a DAP (or even PKR) refusal to support PAS in its demand to implement hudud?

Now, what was that remarkable political term so loved by PAS people like Hadi Awang, Nasharudin Mt Isa, Azizan Abdul Razak and (lurking or just standing by in the nearby shadow) Hasan Ali?

Malay unity! Specifically one with UMNO!

What Harun Taib has said was just (unmistakably) this: If Pakatan wins in GE-13, and PAS has a sizable number of federal MPS, it will if necessary combine with UMNO (and perhaps the Chosen Ones of PKR) to implement hudud.

You can spin it any which way you like, like Hadi Awang’s sweet nothing Let's celebrate our differences to Karpal Singh’s voiced concerns about PAS’ hudud intention, but there's no mistaking PAS' openly voiced intention to jettison the alliance like a used tissue paper, of course after it has already won enough seats with support from (DAP/PKR canvassed) non-Muslim votes.

The problem with celebrating the 'difference' Hadi Awang alluded to, namely hudud, is that once the Islamic legal system has been implemented, non-Muslims will discover too late it's not something they will imagine celebrating, assuming that celebrations, especially those of non-Muslim variety like Valentine’s Day, concerts by foreign artists, wearing of lipstick and perfumes, Lion Dances, dancing, Thaipusam, Cheng Beng, etc, will even be permitted.

Therefore, those apologists who have attempted to dismiss Karpal Singh’s (and my) concerns that it won’t affect non-Muslims or that if non-Muslims have done nothing wrong they shouldn’t be worried about hudud, have not convinced any of us, more so when we have witnessed in so many other nations ruled by syariah-hudud laws that such laws in the hands of unaccountable clerics have oppressed rather than protect the rights of the ordinary people. Please name me one, just one Islamic nation anywhere in the world, as a model of good governance, and a nation where social justice, human rights and democratic processes are upheld.

Thus, we will see hudud invariably and severely affect the lives of non-Muslim Malaysians, regardless of what mealy-mouthed promise PAS may offer to non-Muslim voters.


As I wrote in my previous post PAS and its hudud the problem is not with Allah's word, but unfortunately, when we leave His laws in the hands of clerics, who would of course claim they speak in the name of or on behalf of Allah swt (and it’s a universal trait, not exclusive to any religion), we are immediately at their tender mercies, prejudice and vested interests. And I don't believe that clerics (save for rare exceptions) rank very high in most people's esteem.

Indeed, why should we change from the current system of civil laws which in so many countries have worked so well? The problem is not our civil laws but the current government and its control over so-called independent institutions and the manner in which they (mis)exercise those laws. We should therefore change the corrupt practitioners of our civil laws rather than change the legal system. I’m prepared to vote out BN but not vote in hudud.

Additionally, we already have a parallel legal system for Muslims to seek relief from or deal with matters specifically Islamic, namely the syariah courts. I am not abashed by stating that non-Muslims are comforted by the fact syariah courts have no jurisdiction over them. Yes, there have been a few cases where the civil courts have disgracefully abdicated their jurisdiction over to these syariah courts, though these were due more to the cringe of some judges rather than the failure of the Constitution or the legal system.

So again, why should we accept a hudud system where it replaces the current system and thus directly affects non-Muslims constituting 35% of the population. As I said, I'm not convinced nor assured by PAS' promise that hudud only applies to Muslims. Once it comes into force, no one can argue with the clerics who may decide otherwise. I don't want to be judged nor dictated to by people who seem obsessed with doling out prohibitions and punishments. Imagine dealing with nightmares like Harussani, Hasan Ali, cannot-question-my-fatwas Azizan Abdul Razak, etc.

And Muslims could also argue that the current law is already harsh enough with its draconian capital punishments and don't see any need to add on to it stuff like hands chopping and stoning to death, the latter advocated by Pak Haji Aziz for social problems such as young single women abandoning babies.

At least the current civil laws, other than the irreversible death sentence, allows for reasonable redress of mistakes in judicial judgements. A person wrongly imprisoned still has a chance of being released in a favourable review, while a hand chopped off on an incorrect charge or incorrect court judgement remains forever chopped off, or worse, with the authority's realization of the drastic miscarriage of justice, persuades cover-ups.

Thus Harun Taib’s arrogant announcement on the implementation of hudud, undoubtedly the policy of PAS, has presented us with a nasty situation where we have on one hand an utterly corrupt UMNO incapable of good governance, and on the other, a PAS hell bent (no pun intended) on implementing hudud, which in the face of worldwide evidence of rule by syariah-hudud system, won’t promise any improvement, au contraire, to what we're experiencing with regards to social justice, human rights and especially democratic process.

Thus the dilemma facing non-Muslim voters is that presented by the old saying, ‘Between Scylla and Charybdis’.

According to western classical mythology, Scylla was a six-headed monster on the shore while Charybdis was a nearby sea monster in the form of a whirlpool. The ship intending to reach a desired destination was forced to sail between these two dangers, except that they were so closed together that invariably the ship’s captain had to choose one to encounter during the passage through. ‘Twas a choice between two evils.

While on mythology, I'll indulge in a quick lil’ aside (or as RPK would say, a wee bit of cheong-hei). There is a Chinese myth that the tiger and the leopard come from the same mother tigress, as siblings, which was why/how Aw Chu Kin, the creator of the Tiger Balm ointment, named his two sons, Aw Boon Haw* (tiger) and Aw Boon Par (leopard). 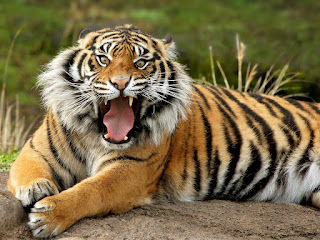 And that is the dilemma facing non-Muslim voters, one which places them ‘between Scylla and Charybdis’, or between two nasty predators, the UMNO tiger or the PAS leopard, legendary fierce fraternal felines, where according to the latter’s recent stated religio-political strategy, may possibly unite as the next new government to implement hudud. 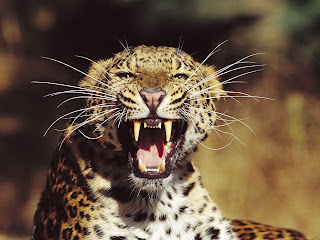 Okay, I won’t ask Anwar Ibrahim and PKR to state their stand on this because I appreciate he's also caught ‘between Scylla and Charybdis’, where no doubt UMNO will pounce on whatever he says to discredit him with either the heartland or the non-Muslims, though it would be interesting to know his inner thoughts on this.

But PAS avowed intention to implement hudud, regardless of dishonourable treachery to its Pakatan allies, represents a clear & present danger to non-Muslims.

Many of you will have to make an eventual decision, to support a hungry rapacious tiger or an angry ferocious leopard. Alas, there is no third choice unless Anwar Ibrahim courageously, daringly and conscientiously stands up against PAS' hudud avowal.